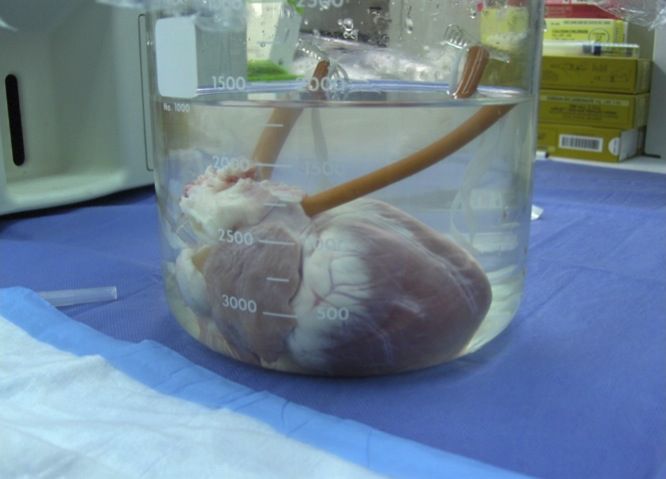 Staying alive on the organ transplant waiting list could get a bit easier with organs that last longer outside the body. That’s the hope of Harvard startup Hibergenica, which looks to commercialize a liquid solution that preserves the metabolism of hearts and livers for about 10 days, Technology Review reports.

The seemingly miraculous “Somah” solution comes from Hemant Thatte, an assistant professor of cardiothoracic surgery at Harvard Medical School and the VA Boston Healthcare System. He devised a cocktail of 21 chemical compounds which successfully preserved pig organs by slowing cell deterioration, and all without needing to lower the temperature of the preservation system.

Not only that, but Thatte’s team also managed to actually restart a pig’s heart in the lab by building an artificial circulatory system to support it. The Somah solution then helped keep it in a sort of stasis for 10 days.

“We’re the first laboratory in the world to restart the heart 24 hours after death,” Thatte told PopSci.

Existing preservation solutions can only preserve hearts for four hours, and livers for 12 hours. Extending that period to 10 days means that patients have access to a wider pool of less time-sensitive organs, because organs could be shipped from places as far away as Hawaii or other overseas locations. And that could potentially cut back on the more than 6,000 patients who died waiting for organs in 2008.

Much hinges upon the next step taken by the Harvard business students who formed Hibergenica. They plan to transplant Somah-preserved organs from pigs to other pigs and gauge survival rates, before they kick off a year of human trials and finally approach the Food and Drug Administration for approval. Kidneys and livers would be first up for testing, followed by heart and lung transplants.

Success with this route could have a huge impact on organ transplantation. It would expand the organ donor pool by easing the time constraint on an organ’s out-of-body experience, never mind the genetically-engineered pig hearts five or 10 years down the road. We’ll definitely be keeping an eye on this down the road, even as we ooh and aah over the next equivalent of a full facial transplant.