Are Views On GMOs Changing?

Last weekend, I found myself at a party talking about GMOs with a friend (wild Friday night, eh?). A few... 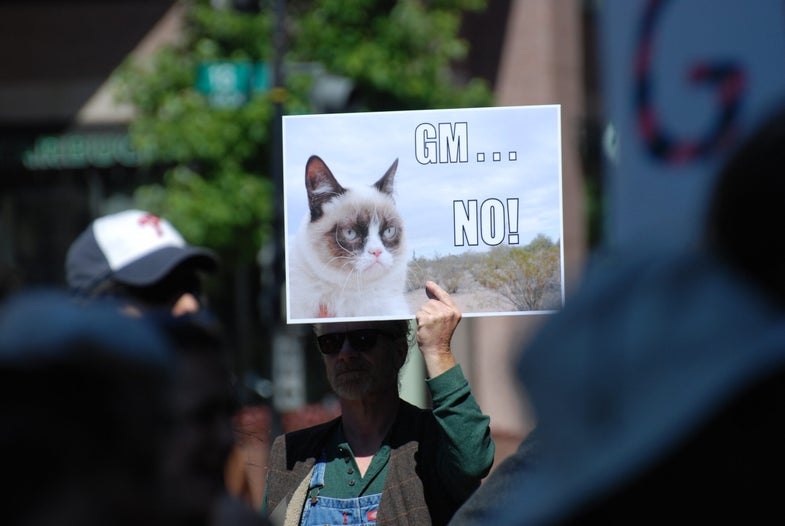 Last weekend, I found myself at a party talking about GMOs with a friend (wild Friday night, eh?). A few days earlier, Intelligence Squared US had hosted a sold-out debate on GMOs in New York City. In case you aren’t familiar with Intelligence Squared, the organization’s debates are based on the Oxford style, and the moderator polls the audience both before and after the teams have presented their cases. The team that persuades the most audience members to their side wins.

Spoiler alert: the team that was for GMOs won, and by quite a lot. Before the debate started, 32% of the audience members were for GMOs, 30% were against, and 38% were undecided. After, the pro-GMO team had 60% of the audience on their side, while the anti-GMO group had 31% (the rest remained undecided). This strong win, argued my friend at the party, pointed to a larger shift in the public perception of GMOs.

If you have 90 minutes to spare, the debate is entertaining. It featured two teams, each with two people. On the pro-GMO side was animal biotech expert Allison Van Eenennaam from the University of California, Davis and, unsurprisingly, Monsanto’s Chief Technology Officer, Robert Fraley. The anti-GMO side had Charles Benbrook, an organics advocate and a professor at Washington State University’s Center for Sustaining Agriculture and Natural Resources, as well as Margaret Mellon, formerly of the Union of Concerned Scientists.

I think both sides did reasonably well, but I was not surprised that the pro-GMO team swayed the audience—their arguments were clearer, as was their delivery. I also counted the audience break into spontaneous applause eight times for the winning team, as opposed to four times for the others.

But do the results of this debate suggest that overall views on GMOs are changing, like my friend said? I’m not entirely sure. On one hand, I’ve written before that certain views on GMO are shifting, at least among the journalists and scientists who lead these conversations. When the likes of food giants Michael Pollan and Mark Bittman reexamine their views on the technology, there is a hint that their massive audiences might follow. A recent survey from the University of Minnesota and North Carolina State University suggests that consumers will be more likely to accept GMOs if the tech has nutritional or safety benefits. And in Europe, where GMOs have faced perhaps an even rockier existence than here in the US, new policies hint that it’ll soon be easier to get the crops approved.

But on the other hand, the most extreme ends of the conversation aren’t budging. This is especially evident in the increasingly frenzied fight over GMO labeling, which the Intelligence Squared debate didn’t cover. Tomorrow, Oregon’s labeling initiative recount—which has already prompted at least one lawsuit—will come in. And in Washington DC, the House of Representatives Committee on Energy and Commerce will hold its first hearing on the FDA’s role in regulating GMOs, which will include discussions on H.R. 4432, a proposed bill that would create a national voluntary labeling scheme. According to a representative from the office of Rep. Mike Pompeo, the H.R. 4432’s sponsor, the bill will be reintroduced to Congress next year.

Anti-GMO activists are really not into this bill, in part because it would do away with mandatory labeling requirements proposed in Vermont (and, depending on Oregon’s recount, in that state as well as with labeling initiatives). They’re calling H.R. 4432 the DARK (Deny Americans the Right to Know) ACT, and groups including the Organic Consumers Association are planning a protest during the hearing.

So, here’s my prediction for the future of GMO fights: They’ve been happening for decades, and will continue for many more. Still, the landscape will change. GMOs will become increasingly ubiquitous, whether labeled or not, and as with most new technologies they’ll eventually seem so familiar that most people won’t give them a second thought. The middle ground on the argument will broaden, and while the poles will become more rabid, they’ll eventually shift attention to newer technologies—perhaps gene editing, or synthetic foods. Wash, rinse, and repeat, ad infinitum.