Scientific Model Determines Where You Should Hide In The Zombie Outbreak

Run for the hills; or better yet, live there already 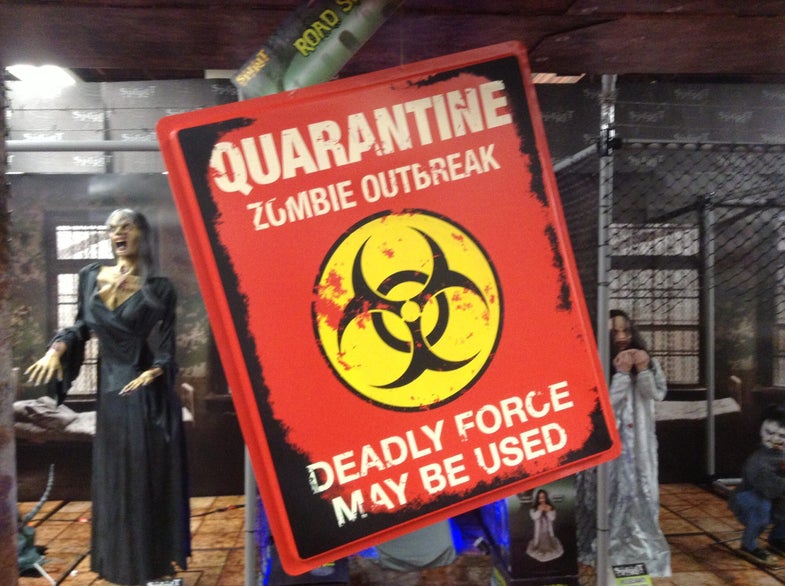 It’s a question as old the zombie genre itself: If humans suddenly turned into contagious flesh-eating undead monsters, where should the survivors hide? In a paper to be presented at the March meeting of the Academy of Physical Sciences, a team from Cornell University made a dynamic statistical simulation of a zombie outbreak, and it turns out the best place to be is where people aren’t.

While zombies are happily fictional (for now), there are many very real fatal infectious diseases spread by human contact, so there is some basis for modeling an outbreak like this. The model, which was done for a population of 300 million, gave humans four possible states of being: normal, infected, functioning zombie, dead zombie. It also took into account the density of human populations, so cities with lots of humans and human interactions would see rapid rates of infection compared to more remote and rural areas. The safest places to be, as determined by the model, are up high in the mountains and sparsely populated northern areas, like Montana, Idaho, or the Dakotas, so following the Rockies up toward Canada is where zombie survivalists should go. The model only looked at the best areas for survival in the United States, but it’s probably safe to assume Canada, with its cold, remote interior, would make for an excellent place to wait out the outbreak.

That doesn’t mean upstate New York is completely safe–just safer. Using Alemi’s model to pick secure outposts might give people longer periods of survival, but they may just be marking time until an inevitable, zombified end. The researchers’ abstract ends on an ominous note. “We build up to a full scale simulation of an outbreak in the United States, and discover that for ‘realistic’ parameters, we are largely doomed.”