Google vs. NORAD: Which Santa Tracker Sleighs The Competition? 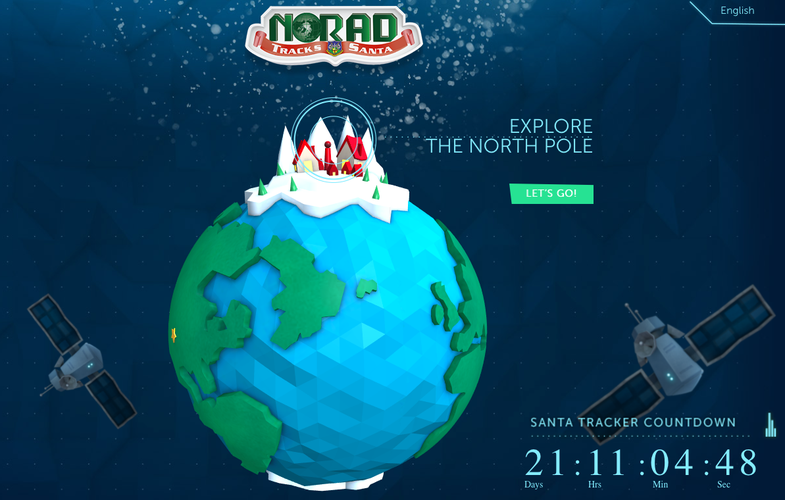 Santa Claus may be coming to town, but how are you going to know when? Turns out there’s not one, but two prominent trackers for jolly old St. Nick’s progress on this upcoming Christmas Eve: one from Google, and a second from the North American Aerospace Defense Command (NORAD). But with two competing Santa trackers, how do you know where to go to get the most up-to-date information about Father Christmas?

Let’s consider the options, so you can make an informed Santa-tracking decision.

Earlier this week, search giant Google launched its Santa-tracking site, complete with a countdown clock. While you’re waiting for the moment to arrive, Google invites you to visit Santa’s village, allowing you to explore a different game or animation each day from now until Christmas.

NORAD also offers its own countdown clock (which, we should note, is three hours ahead of Google’s) and a similar tour of the North Pole, including Christmas music from the U.S. Air Force Academy band, videos about NORAD tracking Santa, a library featuring information about the Claus and Christmas traditions around the world, and a new game each day.

Google is somewhat coy about the technology it uses to track Mr. Claus. The company says only that it’s tapping into Santa’s dashboard, thanks to “one of Santa’s many developer elves.” (We highly suspect that the search company might be tracking him via his…cookies.) It also suggests that the old elf is using Google Maps technology to calculate his round-the-world route. We just hope the company let Santa opt in to sharing this information; we’d hate to see the “Don’t be evil” folks end up on the naughty list.

While Google is a relative newcomer to the Santa-tracking scene, NORAD has a rich history of keeping tabs on the venerable sleigh driver, dating back to a wrong number in 1955. The Sears Roebuck store in Colorado Springs printed a newspaper ad inviting kids to call and talk to Santa. The only problem was they printed the wrong number, so instead, tots reached the operations hotline for the Continental Air Defense Command, NORAD’s predecessor. Fortunately, the commanding officer was the understanding sort and directed his team to start providing radar updates on Santa’s location for kids who called in.

As a military organization, NORAD brings a truly impressive amount of technology to bear; this is no fly-by-night operation (except in the most literal sense). Among its equipment NORAD counts some serious hardware: 47 radar installations across Canada and Alaska, geosynchronous satellites, high-speed digital cameras, and CF-18, F-15, F-16, and F-22 jet fighters. It’s also working with Microsoft, using its Bing technology to map Santa’s progress. No shock there: With all the charity work Bill Gates does, he and Santa are probably besties.

‘Appy Christmas to all

While Google’s primary tracker HQ is browser-based, it’s also offering an app for Android smartphones and tablets with support for broadcasting Kris Kringle’s progress to the Chromecast—as well as a Chrome browser extension. The app offers most of the same activities available via the web browser.

NORAD, on the other hand, has taken a somewhat broader approach. It does tout an official app for Windows 8, thanks to its partnership with Microsoft, but it’s also offering apps for Android, iOS, and Windows Phone. Its app is a little more limited, however, and doesn’t have all the same features as the website. Only some of the games are available, and, in general, it lacks the overall polish of Google’s endeavor.

NORAD has the edge in experience and Santa-tracking hardware, but Google puts together a fun and attractive set of activities to amuse you in the lead up to the big day. The good news is that you don’t have to choose: you can spend your time checking out both. Or, you can always opt for the good old-fashioned method of stepping outside and casting your eyes up to the sky to catch sight of a miniature sleigh and eight (or nine!) tiny reindeer.