You can battle a record-breaking blaze even while trying to conserve water. 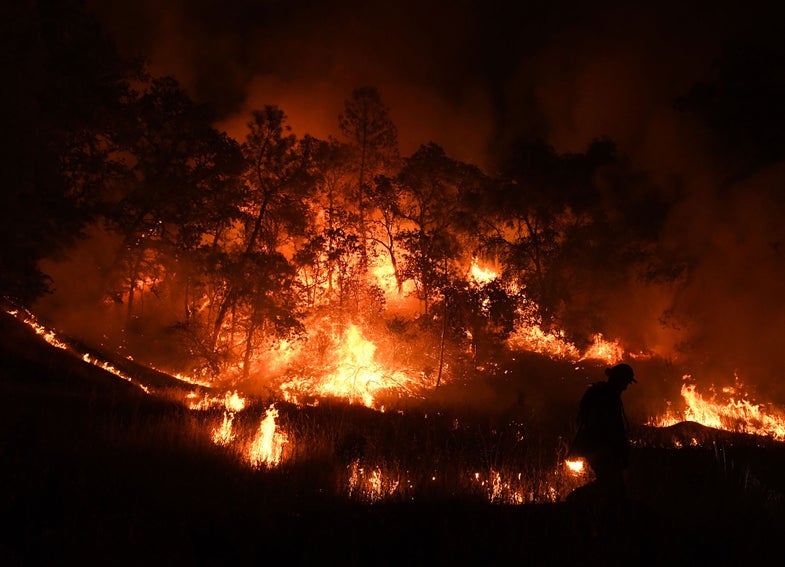 Twin blazes sparked almost two weeks ago in Northern California have flared into the largest wildfire the Golden State has seen in past 100 years.

In a drought-prone landscape like California, says Scott McLean, deputy chief at the California Department of Forestry and Fire Protection, frequent fires are nothing new. But the damage they’re causing is increasing. Almost 350 square miles burned in the state between January and August of 2017, and that number has almost tripled in the same time frame of this year, with close to 1,000 square miles already torched.

“On average, we respond to roughly 300 wildfire starts a week. Two weeks ago, we had 1,000 starts a week—that’s three times the norm,” McLean says. “The stats just keep going up.”

Those twin blazes, jointly known as the Mendocino Complex Fire, have swathed more than 450 square miles—an area almost the size of Los Angeles—in flames. As of Tuesday afternoon, McLean said the fires have destroyed more than 1,800 residences and commercial buildings. The Mendocino infernos are just two of 17 other active wildfires burning across the state, including the Carr Fire near the city of Redding that’s killed seven people and incinerated more than 1,000 homes.

“California is built to burn, and burn explosively,” says Stephen Pyne, fire historian and professor at Arizona State University’s School of Life Sciences. “There’s no counterforce we can muster to stand against a fire tornado.”

Even with the 4,000-plus firefighters battling the Mendocino blaze and 200 U.S. Army soldiers deploying this week to help, Pyne says fires as quick-spreading and relentless as the Mendocino Complex Fire are extremely difficult to contain. These fires gobble up ground by “synthesizing surroundings,” lobbing thousands—and in the Mendocino case, probably millions—of flaming embers at a time, igniting dry earth and bits of fire fuel miles ahead. And in parched climates like California, there’s a lot for a fire to feed on.

Known for fierce droughts that are only worsening with global warming, the state depends on local reservoirs, groundwater, and runoff from the Sierra Nevada mountains for water, some of which is diverted to coastal communities to help crops grow and fish reproduce. Even though California’s five-year drought was declared over last year, Gov. Jerry Brown recently signed new water conservation laws to preserve a commodity so precious to a dry climate. So how exactly does a dehydrated state desperately trying to conserve water fight all these fires?

“It’s easy to think of fighting fires by getting out a hose and spraying water on it, but that’s not how it works,” says Eric Kennedy, assistant professor of disaster and emergency management at York University in Toronto.

Flames of Mendocino magnitude aren’t necessarily fought with the same deluge as urban infernos. These chaotic blazes generate so much wind and heat, Pyne says, that it’s common for water to evaporate before it even reaches the fire. Water is crucial for snuffing out small hotspots along the perimeters, McLean says, but dumping it directly onto the Mendocino complex would be fruitless.

“It’s used to ‘mop up’ and for hotspots,” McLean says. “Heat can go all the way down into root systems and pop its ugly head up later down the line, so it’s important to wet everything down.”

Another tactic used to manage wildfires are containment lines, which are physical barriers that can inhibit far-flying embers from reaching vulnerable areas. Sometimes these lines or gaps already exist in nature (like rivers), or they can be made using bulldozers that strip vegetation from the earth, creating bald patches fires can’t cross over.

But as in the case of the Mendocino fires, even the largest containment lines can’t prevent hot embers from launching out far and wide to start spot fires. This is where back burning—or igniting small, controlled fires—come in handy.

“You can light fires that move towards the main flame and strip out the zone of fuel, so by the time the main fire arrives, there’s nothing left to burn,” Pyne says. “It’s fighting fire with fire.”

This intentional burning is what’s called a prescribed fire, which is used to help diversify habitats, spread resin-covered seeds that require heat to sprout, and burn off excess fire “fuel,” such as dead leaves and pine needles. Fire specialists with Parks Canada, for example, regularly use prescribed fires to maintain and manage pristine natural areas like Banff—home to the country’s oldest national park.

And with flames engulfing crowns of trees, some a hundred feet tall, fires can’t just be fought from the ground. Circling overhead, planes and helicopters rain down fire retardants to help stifle blazes. A mix of water and chemicals like ammonium phosphate can weaken fires and prevent them from spreading (and it looks pretty cool, too).

Since it’s so hard to predict when a fire will spark and how rapidly it will spread, disaster experts like Kennedy say the best way to fight them is before they start. One of the more controversial fire prevention tactics is thinning or cutting down trees. Clearing trees close to houses creates a moat of open space that can protect residences from catching. Kennedy says it’s also a strategy for clearing out dry, dead trees that have been ravaged by pests or disease. But cutting down trees could also open invitations to logging, which can destroy natural habitats relied upon by other plants and animals.

If you live in a fire-prone zone like California, Pyne says one of the most important things to check is your roof for further fire food. Horizontal roofs make it easy for flames to tear through the rest of the house and spread to neighboring structures, especially if they’re covered in dead leaves and other detritus. The Federal Emergency Management Agency recommends building sloped roofs, and using tiles made of non-combustible materials like clay or concrete.

While home renovations are something we have control over, it’s a lot harder to manage miles and miles of open wildland. Pyne says we could do as the Mediterranean countries do: bring in the goats. For years, goats and sheep in Europe have been used to cultivate landscapes, chewing up dry vegetation susceptible to fire. Some places in the U.S. are already doing this. After the Oakland firestorm in 1991, a local veterinarian and her husband, a firefighter, launched Ecosystem Concepts, “home of the four-legged firefighters,” which use animals like goats and sheep to clear out fire fuel and unmanageable vegetation. But this strategy has its pitfalls—left unchecked, these grass-guzzling goats will eat (and subsequently destroy) all vegetation within their reach.

No matter how much we try and prevent them, wildfires will always happen—but that’s actually a good thing. Encouraging “good” fires, like small-scale wildfires and controlled burns, not only spurs on new growth—they also prevent more destructive incidents, like the Mendocino Complex Fire. But really, even these massive fires aren’t inherently bad. They’re only considered disasters when they collide with human populations.

“Fire is as natural as anything else on Earth—it will always be part of ecosystems,” says Kennedy. “The lesson fire management agencies have learned over the past several decades is that by suppressing every fire, you create really high fuel loads that raise the potential for catastrophe down the road.”