Fire-proofing California’s homes is possible—but at what cost?

Building houses to withstand the ever-growing fire problem may be only for the rich. 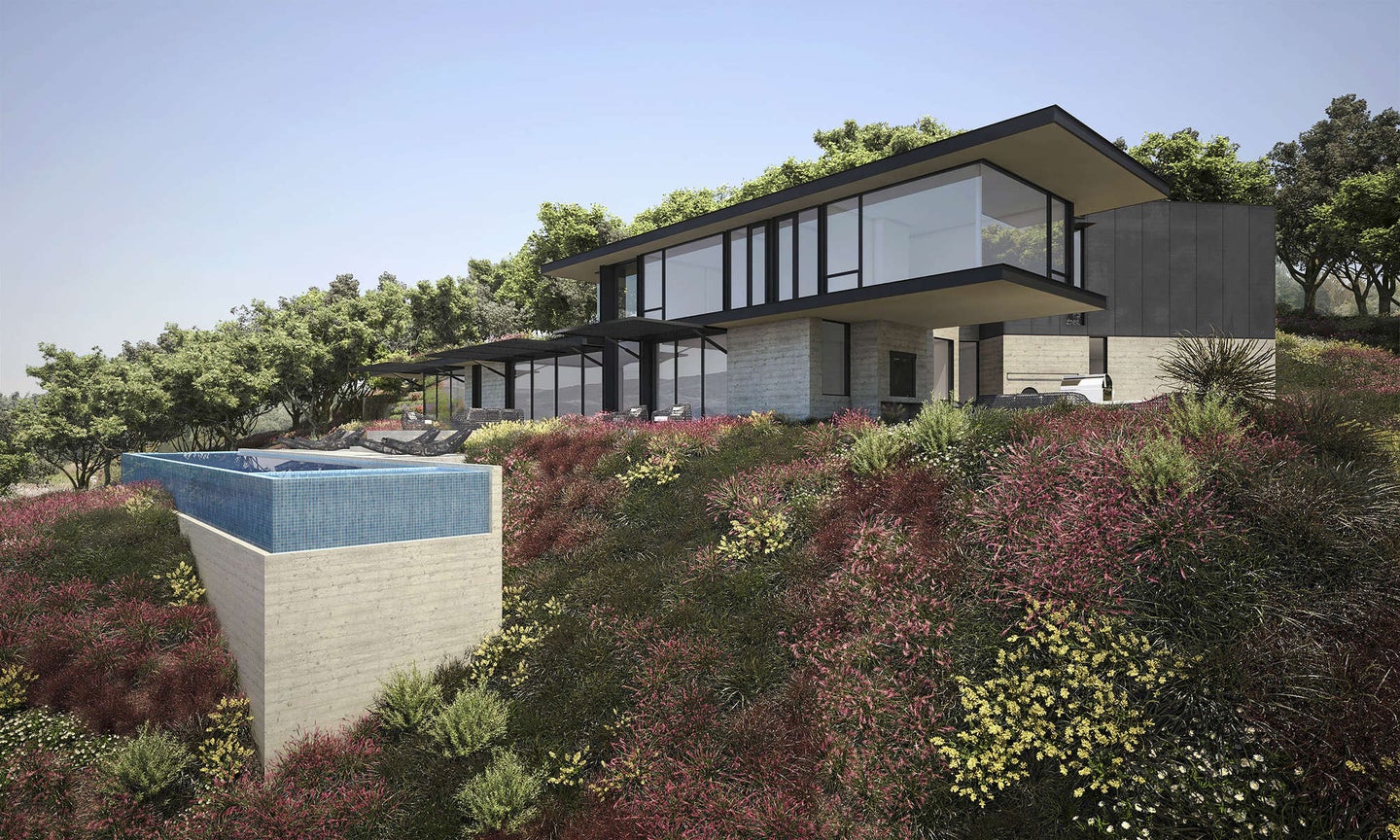 A rendering of the fire-resistant Glen Ellen Retreat, including the insulated windows and lack of gutters. Brandon Jørgensen
SHARE

Brandon Jørgensen grew up in the canyons of northern California. From a young age, he was familiar with disaster: Jørgensen knew the region’s cyclical wildfires firsthand, and was no stranger to its earthquakes either. But, as the architect and designer wrote in a 2017 essay for Curbed, the dozen infernos simultaneously blazing that October were beyond his wildest imagination.

The “Northern California firestorm,” as it’s come to be known, was one of the worst disasters in the state’s history. The Atlas fire, which Jørgensen saw firsthand, destroyed 741 structures. (Other blazes raging nearby, like the Tubbs fire, did even more damage.) As a designer working primarily in Napa Valley and Los Angeles, Jørgensen wrote in Curbed, he wondered: “How can we prevent something like this from happening again?”

“We know what the solutions are,” says Rolland Crawford, a retired California fire official. The outer layer of a double-paned window may crack under intense heat but the second layer is likely to hold—preventing the licking flames from entering a home. Careful landscaping, which creates a defensible perimeter around a structure, gives firefighters a better chance of saving a structure. And communities can organize coalitions to put out smaller flames once the fire trucks have moved on. “But the problem is,” Crawford says, “how do you implement them?”

Throughout history, countless cities have been reduced to ashes: in the year 64 a fire destroyed two-thirds of Rome, then under the control of Emperor Nero. In 1666 a Pudding Lane bakery sparked a blaze that spread over the city of London, eventually engulfing the medieval portion of the city, including old St. Paul’s Cathedral. And in 1871 Mrs. O’Leary’s cow supposedly kicked over a lantern, generating an inferno that destroyed some 10,000 buildings.

Across thousands of years and thousands of miles, each place had at least one thing in common: wood. The city’s very bones were kindling.

Ironically, it wasn’t until skyscrapers started rising across the United States that Americans began thinking seriously about fireproofing buildings, says Sara Wermiel, a historian of technology at Boston University and the author of The Fireproof Building. “There was a fear that as buildings were getting taller, that was just making cities more dangerous,” she says. But the opposite proved true.

Steel frame construction, which allowed builders to hang bricks off a steel skeleton instead of building them up one by one, often relied on non-combustible elements, like metal and brick. While the super-tall structures might seem precarious, they were actually safer than their wooden counterparts closer to the ground.

Over the next 100 years, fire changed—and so did fireproofing. Instead of big blazes raging inside cities, the primary concern today is the wildland-urban interface, or WUI, where human construction meets untamed nature. From California to Australia to Spain, these borders are the hardest hit and the most difficult to defend.

In the 19th and early 20th centuries, Wermiel says, engineers were primarily focused on public buildings, like theaters or city hall. (Or, perhaps, museums, like the Getty in Los Angeles, which is a Type 1 fire-resistive building, the highest resistance rating, and one of the hardiest structures in the Golden State.) Today, though, the majority of property fires damage residential spaces, and designers have only just begun to experiment with what’s possible (and cost-effective) in these smaller, privately-owned spaces.

After the Northern California firestorm, Jørgensen met a couple who wanted to build a fire-resistant dream home. The resulting Glen Ellen Retreat is currently under construction. “It’s a holistic approach,” Jørgensen says of the design. The house will have no eaves or vents to allow floating embers in. Gutters will be underground, so leaf litter can’t accumulate. And every inch of exterior-facing glass will be insulated, the better to resist fires.

“These strategies have always been a commonsense part of my work, but now it’s coming to the forefront,” Jørgensen says.

“Those little tiny costs, of course they add up, but at the end of the day you’re only adding 2 to 3 percent to your product budget,” he adds. “It makes insurance happy. It gives the homeowners a little extra security.”

Jørgensen is also experimenting with strategies lifted from Australian and Spanish builders, who have been designing for wildfires for centuries. Specifically, he hopes to implement a series of protective fire walls, designed to stall an advancing blaze at select intervals from the edge of the property to the house itself. Taken together, the Glen Ellen Retreat and other properties like it should be able to withstand four hours at the center of a blaze. Despite its hardiness, Jørgensen hopes it will never have to endure such a harrowing test. “That’s the stuff that keeps me up at night,” he says.

Houses can be designed for fire-resistance, but so far, communities aren’t. Older homes aren’t built to contemporary fire safety codes, making them more likely to burn. And contemporary fire science has shown that these older structures can actually spread fire to nearby homes, even newly-built structures that meet or exceed code.

Even people in the position to build more resilient homes may prize aesthetics over safety: “I was screaming in my car the other day, because people are rebuilding exactly what they had, with these big tall wooden decks hanging out over the landscape,” Jørgensen says. “It kind of hurts my feelings, actually.”

Choices like these can undermine even the most fire-conscious designs—and there’s no guarantee someone will be around to pick up the smoldering pieces. Firefighters have limited resources; in a wildfire, they can’t see to every single blaze. When things get bad enough, they often have to evacuate themselves and let things burn. Like the shoreline communities that chose not to rebuild after Hurricane Sandy hit New York, some Californians may one decide it’s too dangerous to return to indefensible areas, even if some homes are still standing.

When the apocalypse rolls into town, few think about being the only survivor. But so long as fire-resistance is mostly something wealthier owners of new homes can achieve, that’s often the case. After Hurricane Michael hit Mexico Beach, the country was transfixed by the story of the one house that came out intact. The owners had been able to sink thousands of dollars into disaster-proofing their home, a luxury their neighbors could ill afford.

Crawford, the retired fire official, says California wildfires call for “systems thinking.” Most homeowners can—and should—trim their grasses and cap their eaves with mesh to keep embers out (both wildfire preparation strategies recommended by the National Fire Prevention Association). But true fire resistance will come at the community level, when neighbors work together to protect not a single house, but to safeguard the whole town.