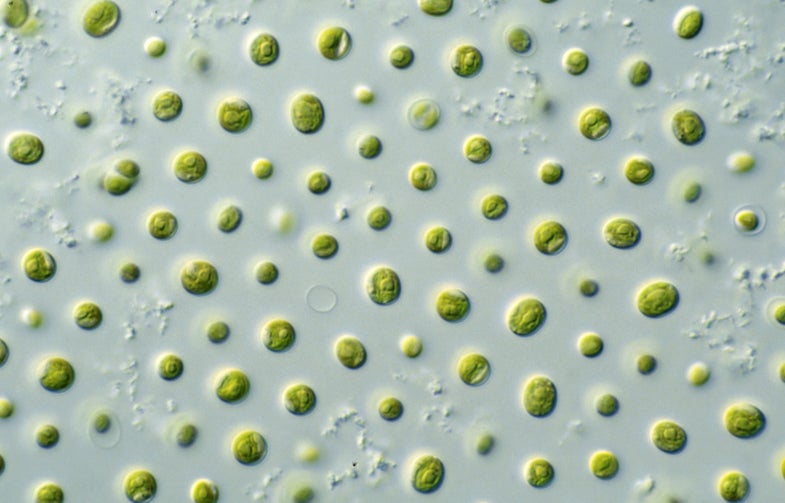 ExxonMobil just torpedoed a shareholder resolution that would have forced the company to report on how climate change policies will impact its business. The company remains committed to fossil fuels in the main, but Exxon is also hedging its bets, investing in a host of breakthrough green technologies that could replace oil — including, believe it or not, algae.

Algae absorbs atmospheric carbon dioxide, like plants. It can survive in saltwater and wastewater, saving freshwater resources for human needs. It can be cultivated in shallow pools built and maintained in regions spare of farmable land. It grows quickly, needs little fertilizer and requires no pesticides.

Critically, algae can provide climate-friendly alternatives to other sources of energy, whether fueling airplanes or feeding cattle.

Microalgae, a microscopic form of algae, can be made into biofuel–just like corn, sugarcane and sorghum. It is nearly carbon-neutral, meaning that it adds little additional carbon to the atmosphere. During photosynthesis, algae fixes atmospheric CO2 into fuel. Burning that fuel returns the stored carbon to the skies.

That’s significant because jet fuel remains a huge source of carbon pollution. Soon, algae could be cheap enough to compete with fossil fuels. Boeing is currently working with Japanese airlines and the Japanese government to provide algae-fueled flights to the 2020 Olympic Games in Tokyo.

Algae can feed animals (and people)

Once the oils needed to make biofuel are squeezed from microalgae, producers are left with a protein- and carbohydrate-rich byproduct. That substance can be dried and turned into feed for livestock, replacing soy as a source of protein for chickens, cows and pigs. This will ease demand for arable land, which is crucial. In the next few decades the global population will round the corner on 9 billion souls just as climate change renders fertile regions dry and barren.

A 2015 study showed cows could live on a diet of up to 45 percent algae meal. Cows didn’t object to the taste (as judged by watching them chow down), and algae didn’t harm the health of the animals or degrade the flavor of the meat.

Brian Walsh, a researcher at the International Institute for Applied Systems Analysis in Austria, and his colleagues modeled the effect of replacing 35 percent of animal feed in the United States with algae. The move would free up millions of acres of farmland that could be converted to forests or used to grow biofuels — both of which would help combat climate change.

Humans can also cut out the middleman (livestock), turning algae into a protein supplement. Similarly, the oily component of algae used in biofuels can be turned into a replacement for butter, oil and egg yolks. Solazyme produces a butter replacement that contains less saturated fat than the real thing. Sold under the brand AlgaVia, the lipid powder can be used in bread, pasta sauce and all manner of baked desserts.

Before long, algae foodstuffs could be cheap enough to compete with eggs, milk and vegetable oil. To the extent algae displaces animal products and palm oil, it would be a win for the climate. Animal agriculture is a huge source of carbon pollution, much of it from cows and other large mammals belching heat-trapping methane. Palm oil is driving deforestation in Malaysia and Indonesia, where growers are burning forests to clear land for palm tree plantations.

Once growers surmount the technological challenges of growing algae, it could prove a game changer for everything from food to flight, giving new meaning to the term “going green.”

Jeremy Deaton writes about the science, policy, and politics of climate and energy for Nexus Media. You can follow him at @deaton_jeremy.