The Green New Deal is more feasible than you think

Though that may depend on how we define "clean" and "renewable." 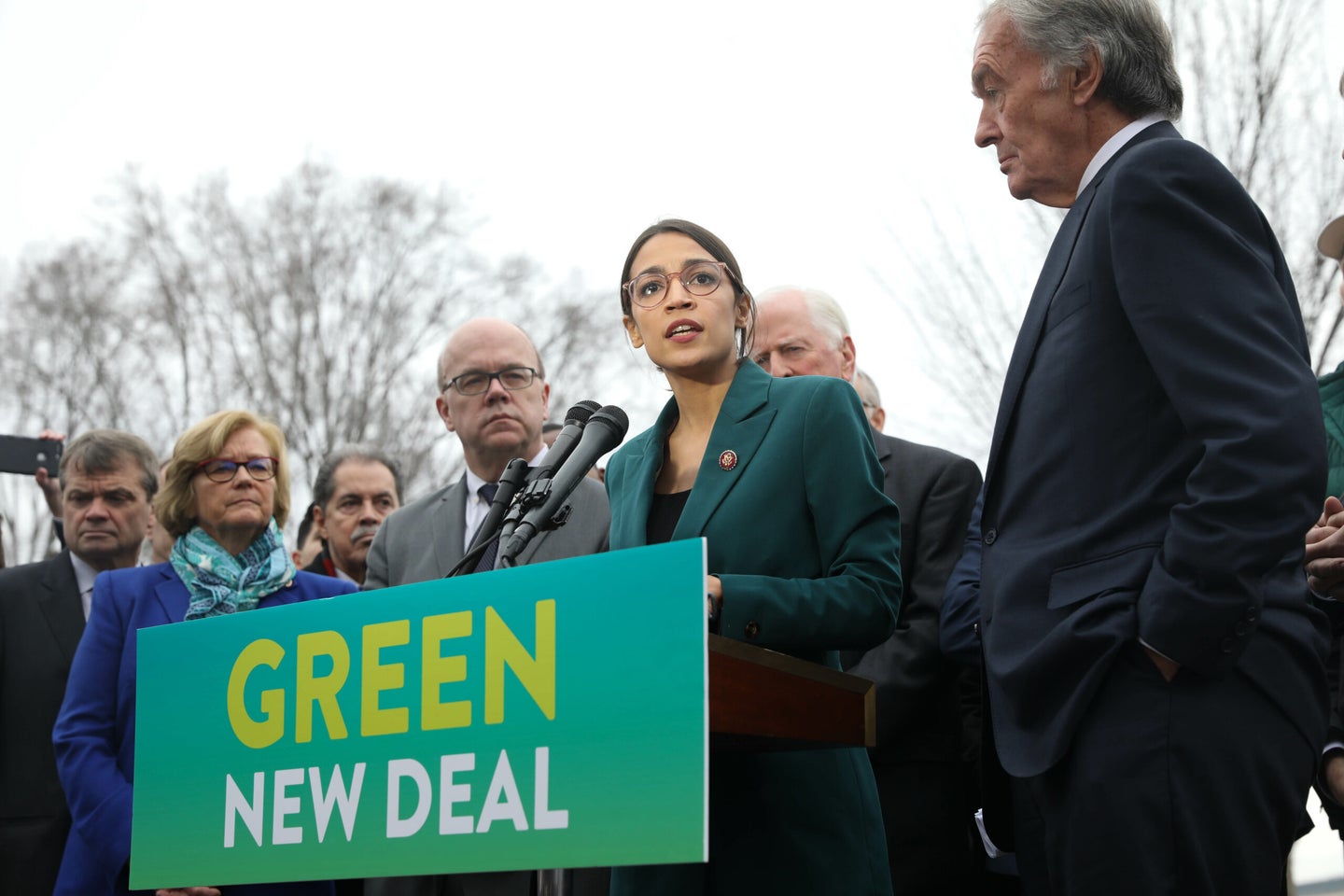 There’s no question that we need fast and far-reaching action to curb our emissions if we’re to stop the catastrophic effects of impending climate change. That’s why a number of policies—at local, state and national levels—are advancing new goals to meet our energy demands from clean and renewable sources.

The Green New Deal, a resolution introduced by Congress members Alexandria Ocasio-Cortez and Ed Markey, is the most recent national proposal to transform our energy system. As part of its 10-year plan, the text includes the goal of “meeting 100 percent of the power demand in the United States through clean, renewable, and zero-emission energy sources, including— (i) by dramatically expanding and upgrading renewable power sources; and (ii) by deploying new capacity.”

It’s an ambitious target that some have called politically or economically infeasible, but the idea is not new. In fact, scientists have been exploring roadmaps for a carbon-neutral near-future for at least a decade. Most of the technological means are already here. Now it’s a matter of how to achieve our carbon-cutting goals.

Where we are now

Currently, petroleum, natural gas, and coal supply 80 percent of our energy, according to 2017 numbers from the U.S. Energy Information Administration. The remainder comes from nuclear and renewable sources, with nine and 11 percent respectively.

Even our current renewable mix doesn’t exactly square well with goals for “clean” renewables. Biomass—a category that includes sources like burning wood, plant wastes, and ethanol—makes up 45 percent of U.S. renewables, even though all of those sources pollute and emit CO2. Biofuel crops, largely corn, will re-absorb these emissions, making it closer to carbon-neutral from a life cycle perspective than fossil fuels, but farming and processing the corn into fuel releases a lot of greenhouse gases—an improvement, overall, from burning gasoline, but still a net gain in carbon.

That’s why the use of terms like “clean,” “renewable,” and “zero-emission” is so important, and something scientists and lobbyists fight over. Specifying clean and renewable as a goal cuts out biofuels and nuclear, leaving our options as mostly wind, solar, and hydropower.

Where we’re trying to go

Though our current mix of energy is dominated by fossil fuels, that doesn’t mean 100% renewable goals are infeasible. “It’s technically and economically possible to do it by 2030,” says Mark Z. Jacobson, Stanford University civil and environmental engineering professor, about a transition to 100% clean, renewable energy. “But for social and political reasons, it will probably take longer, maybe up to 2050.”

In 2017, Jacobson expanded this analysis to 139 countries, concluding that the 2050 power demands of these nations could be met fully with energy the wind, sun, and water. And in 2018, he further demonstrated that power demands could be met despite the intermittent, fluctuating nature of renewable energy sources.

These findings may seem out there, but they’re not limited to just Jacobson’s team. His studies are among 37 that have found that nearly-all to all power needs could be met by renewables by 2050. These studies include findings from 11 independent research groups, including scientists in Denmark, Colombia, Japan, and Australia. “Of the people who actually analyze 100 renewable systems,” says Jacobson, “they’re virtually unanimous that it’s possible.”

To make 100% clean and renewable by 2050 a reality, we’d need to close all existing coal and natural gas power plants and replace them with electric plants fed by renewable sources. All homes would need to retrofitted with electric appliances, and gas-powered heating replaced by heat pumps. Our cars, buses, and trains would need to switch to electric- or hydrogen-power analogues. Right now, we haven’t developed electric aircraft or ships and that might not happen until after 2030, says Jacobson, which is one of the challenges for a fully renewable system.

Massively expanding our currently-meager renewable infrastructure sounds daunting, but Jacobson points to existing carbon-neutral-committed cities and states as examples. Earlier this month in Los Angeles, for example, Mayor Eric Garcetti scrapped plans for three natural gas power plants, nudging the city’s power department to pursue clean and renewable infrastructure. That move came shortly after California adopted its goal of using fully zero-emission energy by 2045 (although the wording of the measure allows for nuclear technology). Overall, Jacobson says a combination of federal mandates, such as stricter emissions laws, and financial incentives could fuel similar changes across the country.

Costs of a new energy system

In total, a nation-wide energy transition would cost $15 trillion, says Jacobson. But, he adds, “It’s much cheaper than the current system—it’s like one-eighth the social cost and one-half the direct energy cost, so it’s really foolish not to do so.”

When it comes to bringing down energy costs, consider that electric power is more efficient than combustion. In a gas-burning car, only about 20 percent of the energy from fuel goes to turning the tires—the rest is lost as heat. In an electric car, around 80 percent of energy is used in moving. “So if you electrify transportation, you have one-fourth the energy required,” says Jacobson. That reduction—along with switching out gas-heating for more-efficient heat pumps, cutting out the energy needed to refine and transport fossil fuels, and other efficiency upgrades—would reduce energy costs by about one-half in coming years.

As for Jacobson’s “social costs,” they include healthcare costs—such as the 62,000 deaths annually from air pollution—and the costs of climate change-related damages, both of which would be cut if we got rid of our fossil fuel emissions.

Plus, the government wouldn’t spend those trillions all at one time. Instead, the money would be likely spent over a couple decades, and “you’ll get it back over 30 years,” says Jacobson. And “when I say it costs 15 trillion, this is not what the government’s going to outlay,” adds Jacobson. “It’s going to put out a small fraction of that, to incentivize, because these things make money on their own.”

Sunshine and wind speeds vary by time and place, making a steady energy supply harder to secure. In his work, Jacobson has accounted for this issue with different options, including building extra panels and turbines to keep up with demand when supplies are low, and building storage capacity with batteries. In some countries, geothermal and hydropower energy could provide a steady, consistent backup to more fickle fuel sources.

Researchers studying U.S. energy roadmaps tend to agree that rapid, large-scale changes to our supply are possible, moving us toward a carbon-neutral future. But some are skeptical of plans heavy in renewables and battery storage. “Some argue that batteries or other energy storage can solve this problem,” write Stephen Brick and Armond Cohen, senior advisor and executive director of the nonprofit Clean Air Task Force, respectively, in a recent op-ed in The Hill. “But batteries typically store and discharge power over periods of 4-10 hours, not the weeks and months that are needed.”

The variability aspect is one reason why researchers argue about the wording of zero-emission goals like the Green New Deal, and how words like “clean” and “renewable” are used. Renewable excludes two key zero-emission technologies, nuclear power and fossil fuel burning with carbon capture. Clean excludes polluting renewables like biofuels. “Balancing wind and sun with firmer technologies such as nuclear, carbon-scrubbed fossil plants, and “firm” renewables such as hydroelectric, geothermal and biomass – can avoid the high cost of wasted excess, or massive storage,” Brick and Cohen write. The authors also argue that the text of the Green New Deal, as well as Senator Markey’s own words, indicate being open to various technologies that help speed us toward a zero-carbon future (the text itself makes no mention of nuclear or carbon capture).

John Bistline, principle technical leader at the Electric Power Research Institute, says that building a lot of wind and solar would push prices so far down that these industries wouldn’t make much money, thus making them difficult to sustain. “One conclusion from a lot of our work is that it’s hard to see scenarios where the economics themselves drive renewables,” says Bistline, adding that EPRI’s findings support using “technology-inclusive” options like nuclear energy and carbon capture.

Jacobson, on the other hand, doesn’t include nuclear in the mix because of how long it takes to construct plants, saying it takes 15 years, on average, to build and launch a new nuclear plant. Relying on such technology, therefore, would prolong fossil fuel use in the interim time: “If you planned on [building nuclear power plants] today it won’t be ready until 2034, so it’s impossible for it to even help the 2030 goal of the Green New Deal.” He adds that both nuclear and carbon capture technologies are more expensive than renewables. Also, the think tanks promoting nuclear and technological fixes tend to have financial ties to those industries, Jacobson says. Indeed, a 2016 tax form from the Electric Power Research Institute indicated that most of the organization’s highest-paid independent contractors were nuclear-focused energy companies.

If the Green New Deal goals continue to gain traction, it seems the debate will be less about if we can greatly reduce our emissions and more about how we should reach those targets.