Here’s a plan to turn bullfighting arenas into drone hubs 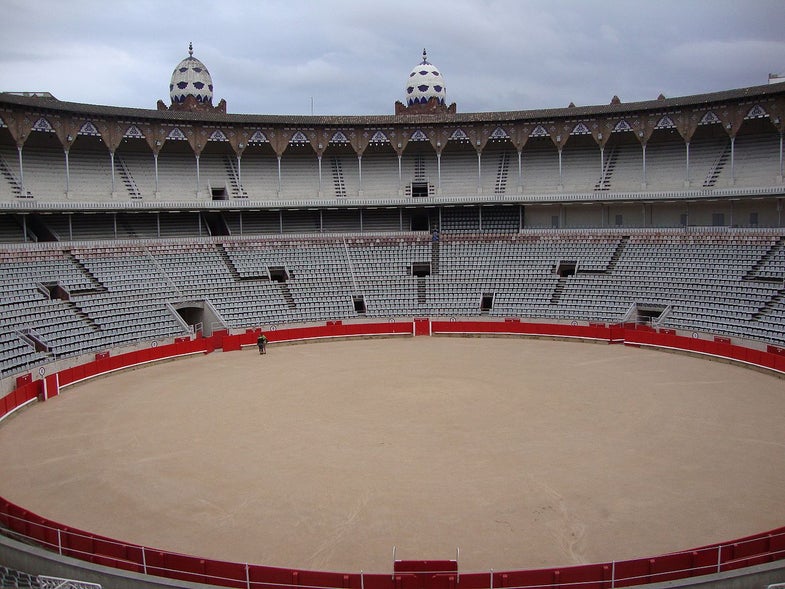 The Plaza Monumental de Barcelona, built in 1914, held bullfighting until they were outlawed in 2012. Maurizio Ceo, via Wikimedia Commons CC BY 3.0
SHARE

A bullfight is a deadly sort of acrobatics, a slaughter as spectacle. Catalonia outlawed the practice in 2011, which left Barcelona with a monumental problem: what, exactly, should the city do with its iconic La Monumental bullfighting arena, now that there would be no bullfights? An architecture student’s concept reimagines La Monumental as not just a relic of the past but a beacon of the future: he wants to turn it into a drone hub.

Frederick Ajjoub, who is currently working toward an Architect Masters at the Institute for Advanced Architecture of Catalonia, posted an open-source concept for his reimagination of La Monumental, centered around flying unmanned vehicles. To preserve the historic building, Ajjoub’s concept leaves the existing structure itself intact, and balances a multi-story apparatus on the causeway around the arena. Fitting the ambition of the concept, this mostly free-standing drone hub is designed to be a standard model, to put in parks or fields wherever a country might want to replicate the drone infrastructure.

The first layer of the hub is the bullfighting arena itself, this time repurposed, in Ajjoub’s words, for “drone shows, drone racing, prototype tests, workshops and competitions,” which he imagines as built and tested in the repurposed “Drone Fight Arena.”

Above the arena sit multiple rings and landing pads, linked by ramps and walkways. Partially covered rotating rings serve as launchpads and hangars for smaller machines, possibly resting and recharging between deliveries. With storage in the rest of the arena and road access to the building, cargo drones could be stocked and reloaded from the hub before flying out for last-mile deliveries. Hypothetical partners for the concept include Amazon, Uber, and DHL, so Ajjoub is envisioning a shared infrastructure as he is plotting a specific drone hub.

Explore the 3D model for the drone hub below, and check out Ajjoub’s full concept post, complete with Creative Commons-licensed files, over at LinkedIn. And, if the drone hub concept never materializes, last October Spain’s Constitutional Court overruled Catalonia’s ban on bullfighting. As a compromise sport, may I suggest replacing lethal matadors with nonlethal drone bullfighters instead?