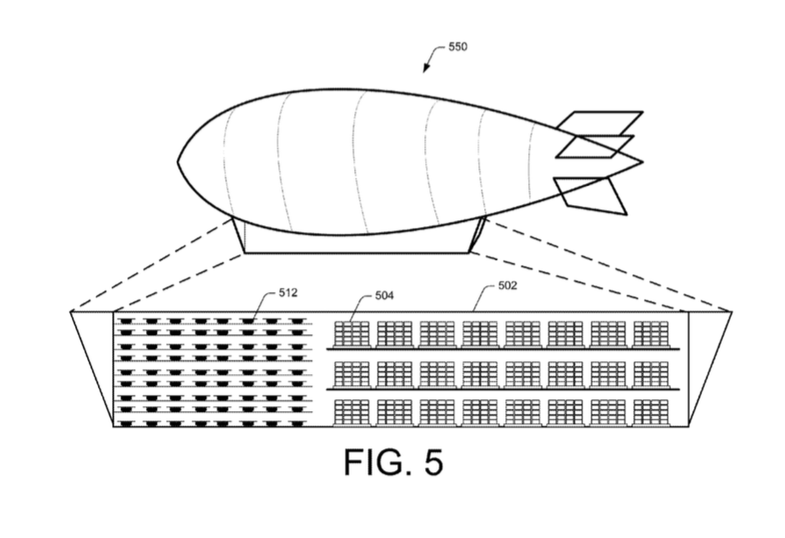 There is a structure hovering silently above the city. Buoyant and robotic, it’s the store where everyone shops—and a store that no one ever visits. Summoned by the press of a button and a signal sent through the air, merchandise is prepared for flight and delivered to the ground gently, by drone.

Such is the future promised in a patent granted to Amazon under the jargon-filled title “Airborne fulfillment center utilizing unmanned aerial vehicles for item delivery.” A “fulfillment center” is Amazon’s preferred term for warehouse, framing the larger storage facilities as only temporary destinations for the cargo between manufacturer and consumer. The unmanned aerial vehicles are, of course, drones. And the blimp? That’s everything put together, a floating body housing a warehouse and delivery robots. 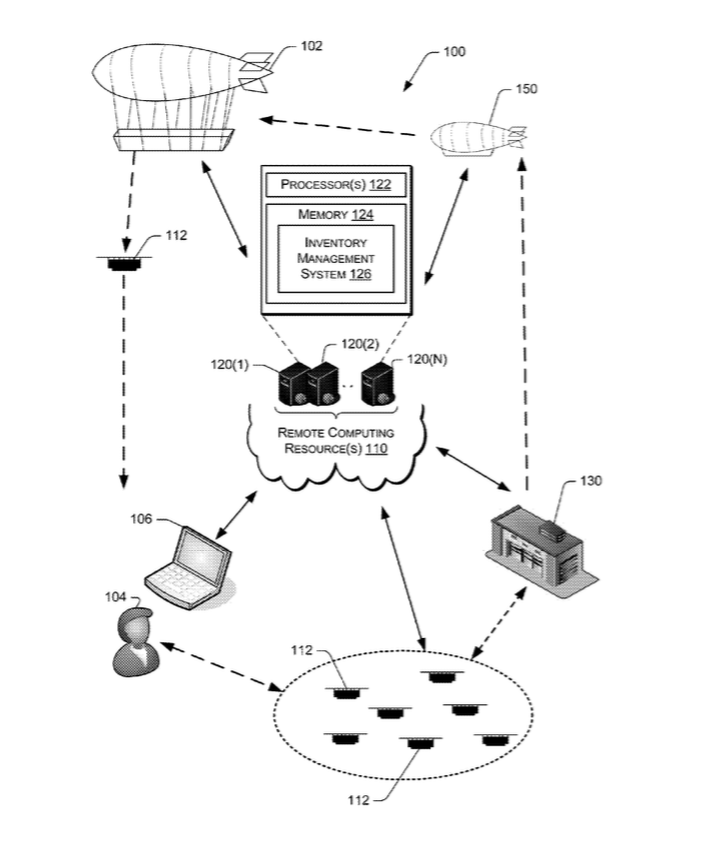 The system involves one human customer and a lot of machines talking to each other.

A complex network of automated logistics would support this flying warehouse and drone delivery system. Sensors within would keep track of inventory in real-time, allowing shoppers on the ground to browse and make purchases. Drones, once loaded with packages, would glide to their destinations below, using power only for slight steering adjustments. After delivery, they’d flitter off to a ground station to recharge or be loaded onto shuttles bound for their home in the sky.

The airship would float at high altitude—up to 45,000 feet above ground, according to the patent—but with the lighter-than-air interior of the airship doing most of the lifting, there is no mention of the power it would need to operate or stay afloat. Solar panels are a safe assumption, but in a document so concerned with turning an airship into a warehouse, it seems odd that “how the airship powers itself” isn’t addressed.

As with all speculative patents, this is the early stage of a possible future, a heavily-refined version of an outline on a napkin for a technology that might someday enter into being. What’s notable is the vision it promises: near-instantaneous, doorstep delivery, in a world where the only people explicitly mentioned are customers. Engineers and technicians exist behind the scenes, recharging drones and making the communication relays work. Human delivery people? They’re mentioned only as the status quo that this patent would replace.

Unlike other delivery drones, which must power themselves, this concept uses mostly gliders, gently steering themselves into position as they descend from the sky.

Right now, Amazon operates on top of existing infrastructure, an online market that can supplement existing delivery services with its own commercial air fleet during peak season. This is generally good news for delivery companies like FedEx and UPS, as well as their combined workforce of over 800,000. Yet when Amazon itself is responsible for providing the service, it does everything it can to minimize the human presence needed. Just look at its grocery stores without grocers.

Amazon’s airship warehouses won’t need human security guards, janitors, or laborers of any kind on the inside. Robots will ferry merchandise in and ferry it back out. It’s a pie-in-the-sky dream, but it promises something many technology companies are aiming for: a world where employees monitor machines, and machines interact with customers.

Oh, the lack of humanity.