Exoskeletons of the future look like high-tech workout clothes 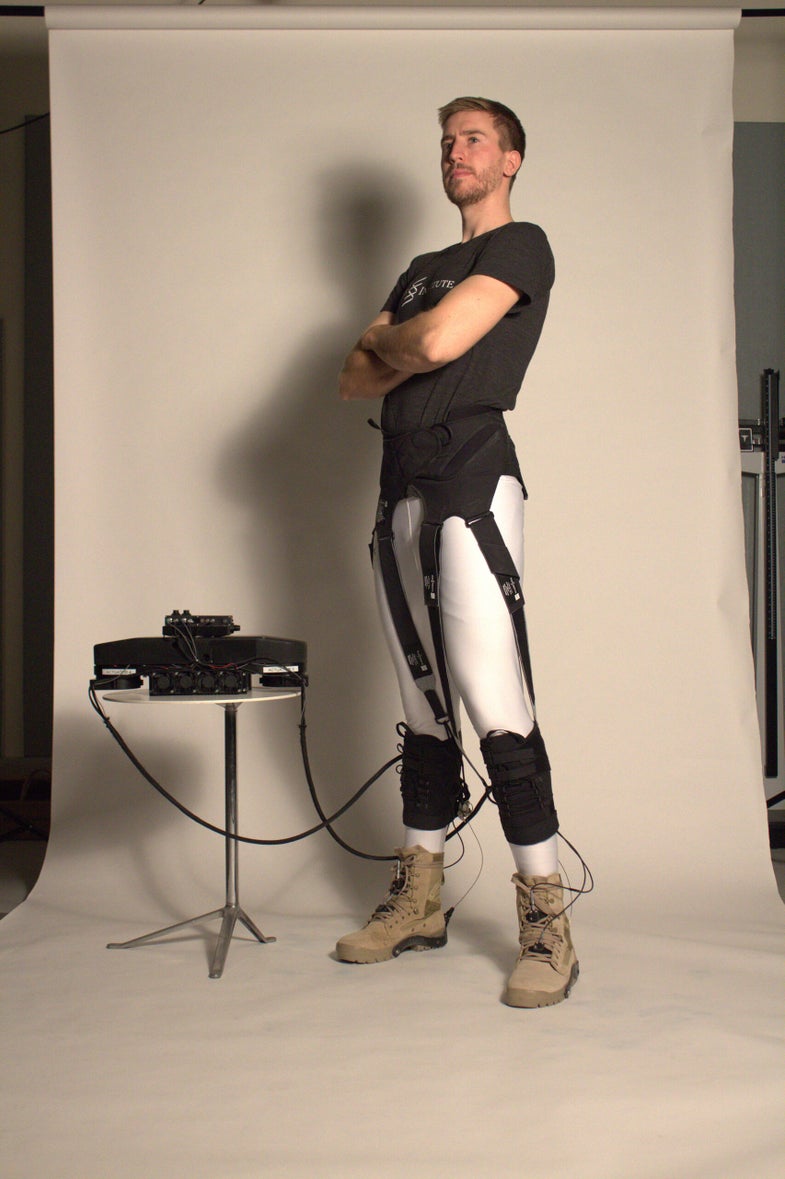 The word exosuit has become all but synonymous with a hard-shelled suit that imbues its wearer with superhuman abilities—leap tall buildings, lift multi-ton items, and make the paralyzed walk—thanks to some awesome looking robotics. But some exosuit researchers in a recent study published in Science Robotics, are taking a softer approach to exosuits. These rigs have more in common with high-tech workout gear than a robotic sci-fi suit, and they could help improve human mobility.

To see if spandex exosuits could give users a boost, researchers strapped seven subjects into the fancy workout gear—what they call functional apparel.

“These are textile components that allow us to anchor the wearer and attach components comfortably and securely to the human body,” said study author Conor Walsh, a researcher at Harvard University’s John A. Paulson School of Engineering and Applied Sciences.

The researchers attached these fabric components to the ankle and calf to apply force and assist with plantar flexion or bending, and to the hip to help with hip flexion. Once they anchored the body, they attached a cable connected to a pulley motor. The cable spans across the ankle joint to the back of the calf and “shoots” energy into the ankle, boosting the walker’s natural gait.

To test the system, suited subjects walked on a treadmill while researchers measured their metabolic output—how many calories their bodies were consuming. An effective system would mean that the wearer burned fewer calories with the suit powered on than they did with it powered down. And how: subjects consumed 23-percent less energy when assisted by the suit, which is the most boost a tethered exosuit has ever demonstrated.

This might not sound like a flashy result. But at their core, exosuits make the body move more efficiently. Take, arguably the most famous fictional exosuit, the one worn by Tony Stark’s Iron Man. It might boast jet propulsion and lasers, but when Iron Man punches someone the suit is simply taking Tony’s energy and magnifying it. Put a 9-year-old in the Iron Man suit and he’d be a very strong 9-year old—but not as strong as Tony, a grown man, wearing the same device.

For a long time it was thought to be impossible to improve the human machine. When functioning well, the human body is incredibly efficient. Millennia of evolution have refined our walking rhythms, step length, and even our swing into patterns designed to conserve the body’s energy. But diseases like cerebral palsy and Parkinson’s that affect a person’s gait do so in part by making them use as much as 70 percent more energy. Rigid exosuits can help them walk better—but at an energetic cost. You have to be strong to carry the weight of an Iron Man suit. That’s why softer options like the one in the new study are so promising.

“A big part of quality of life is moving,” said Greg Sawicki, an exosuit researcher at the University of North Carolina at Chapel Hill who was not involved with the study. “For people who have disabilities, and also people who are just naturally aging like baby boomers, these sorts of devices would give them a little extra in the tank.”

Both Sawicki and Walsh caution that this research is still in its early stages.

“It’s a minimum of ten more likely 15 years before we see people going to REI to buy them for recreational use,” said Sawicki, though the timeline for clinical use may be shorter.

But this kind of basic science can inform better exosuit design moving forward.

“It’s a study that helps us understand the relationships and the tradeoffs between the systems you give and the benefits that a person can get,” said Walsh.