This Valentine’s Day, Elon Musk wants you to know that machines will take over the world and make you obsolete 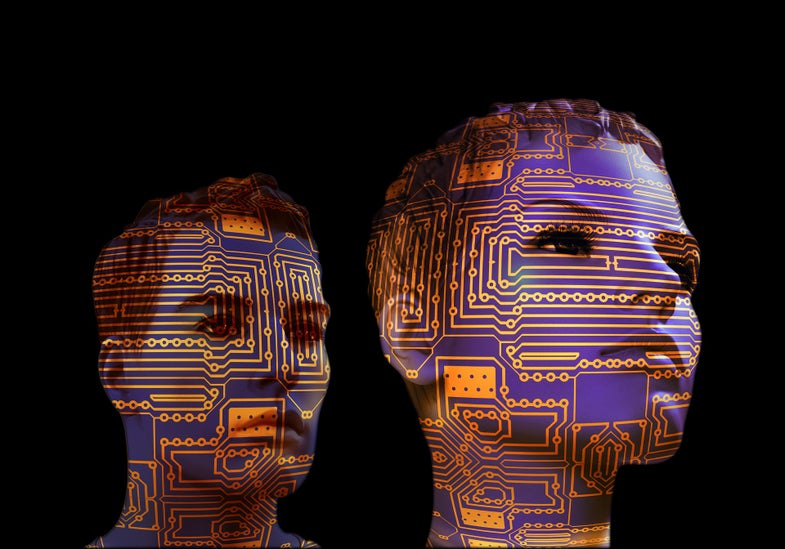 Apparently “Battlestar Galactica” had it right all along. Technology mogul Elon Musk says the way to deal with advancing artificial intelligence is to merge with machines—or risk being made redundant.

At the 2017 World Government Summit in Dubai on Monday, Musk commented that “some kind of high-bandwidth interface to the brain will be something that helps us achieve symbiosis between human and machine intelligence.” The statement came during a question and answer session in which Musk had already articulated that, “There will be fewer and fewer jobs that a robot can’t do better.”

His argument is essentially that because computers, well, compute much faster than our sluggish cerebrums, we’ll need to somehow supercharge our brains to stay relevant in the age of artificial intelligence. It’s a pretty ambitious solution, given the current limitations of brain-computer interfaces, though it’s in line with the sort of fanciful ideas that media outlets love to quote Musk on.

Let’s be clear here: What Musk is proposing may be far-fetched, but it’s a response to a very real problem that’s going to affect a lot of people in the near future. Jobs that involve predictable manual labor are in danger of becoming obsolete. McKinsey & Company estimates that about 78 percent of those types of jobs (along with 69 percent of data processing and 64 percent of data collecting) could become completely automated. Driving-related jobs are likely to become increasingly automated as self-driving technology improves, and given that those were the most common jobs in 29 states as of 2014, we should absolutely be focused on finding a solution.

But Musk has also floated a much simpler—and more realistic—solution. And you won’t hear about in the headlines.

“What are we going to do about mass unemployment? That’s going to be a massive social challenge,” Musk told the crowd in Dubai. “Ultimately I think people will have to have some kind of universal basic income.”

Universal basic income is a minimum income that a state or municipality gives to each of its citizens or residents to ensure everyone’s basic needs are met. The idea dates back to at least the 1970s, when the Canadian province of Manitoba briefly sent out checks as part of a program called Mincome. The idea has gotten more attention as fears around automation—and artificial intelligence—have made the spectre of mass unemployment more corporeal.

Switzerland recently toyed with a universal basic income, and though it was voted down the idea has still tempted plenty of world leaders. President Obama told Wired that “Whether a universal income is the right model—is it gonna be accepted by a broad base of people?—that’s a debate that we’ll be having over the next 10 or 20 years.”

Universal basic income isn’t necessarily the best solution to the rise of automation. A federal report entitled “Artificial Intelligence, Automation, and the Economy” from December 2016 argues that a better solution would be to simply prepare workers for an AI-dependent world. That means training low-skill employees to perform tasks that mesh well with automation. But universal income isn’t a crazy idea. It could be realistically implemented in the next decade or so, it offers solutions to some of the problems we’re likely to face in an automated future, and it’s a policy decision rather than a technical breakthrough. And as the founder and CEO of two companies that rely heavily on manufacturing, Musk is smart to be thinking ahead about how he’s going to deal with an AI-dominated world.

As for Musk’s human-brain symbiosis, even he admits that stuff is “really getting into the science fiction world,” and he concluded his discussion on the topic with “this is esoteric.” Brain-computer interfaces show promise—especially when tackling issues like paralysis. But there’s little to suggest that they’d solve the bottom line issue of AI taking jobs, especially in the timeframe that we’d need to preempt the coming automation revolution. As Musk alludes, we need social and economic fixes—not just technical ones.

This whole discussion also assumes that there will be some kind of unemployment crisis. As that AI and the Economy report said, “The economy has repeatedly proven itself capable of handling this scale of change, although it would depend on how rapidly the changes happen and how concentrated the losses are in specific occupations that are hard to shift from.” We could very well be facing a future that will require drastic adaptations, but we just don’t know yet. And that’s exactly why we need reasonable solutions, not science-fiction based ones. It’s easy to make headlines by talking about crazy ideas with no real plan to implement them. It’s harder to address the complex social, economic, and technological issues that companies like Tesla and SpaceX will face in the coming decades. But the hardest thing—per usual—is also the right thing.

Maybe we should spend a little more time covering Musk’s more thoughtful ideas. He’s also talked at length about the psychological issues we’ll be faced with. In an automated future, humans will face perhaps the greatest challenge of all: boredom. And we’ll have to find a way to occupy our time. Or, as Musk puts it: “Life just can’t be about solving problems, or what’s the point?”