Watch a snake robot wriggle through a Norwegian fjord

New tests put the industrial Eelume robot through its paces 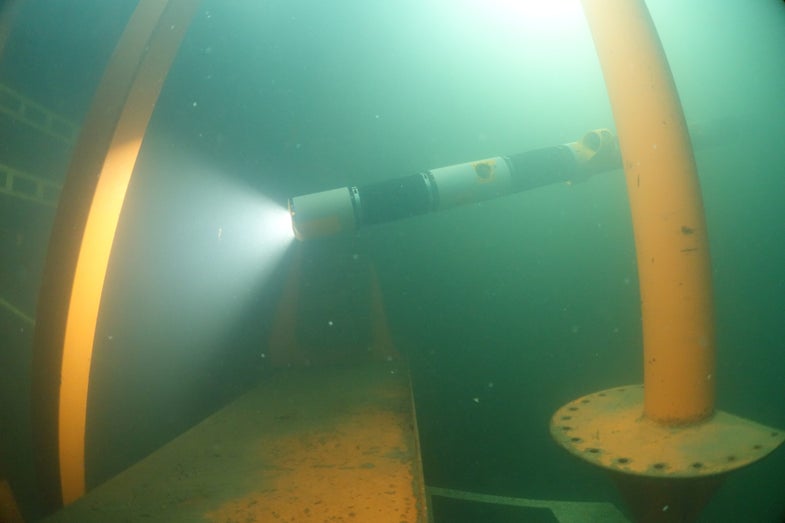 The hole on the side of the robot's body is a lateral thruster, allowing it to move side-to-side. Eelume AS
SHARE

A snake is a tube that eats, a wriggling cylinder that carries a stomach and not much else. So it was a natural inspiration for Eelume AS, a Norwegian underwater robotics company, when they needed to design an efficient, minimalist robot. They decided to replicate a snake’s bendy body, creating a compact form adorned only with small sideboard motors and cameras.

We first saw the Eelume remotely operated vehicle last year, when a prototype writhed around obstacles in a testing tank. Today, Eelume released the first footage of a robot undergoing trials in ocean water, at the PREZIOSO Linjebygg Subsea Test Center in the Trondheimsfjord. With a face full of lights and cameras, and a flexible body carrying engines and side-facing cameras, the Eelume looks like quite the minimalist submarine.

Unlike snakes, the Eelume has a modular structure. That lets users attach various tools to its front end, adding or subtracting engines, cameras, joint sections, and other tools. People can also reconfigure the robot at different lengths for different functions.

Once outfitted, the robots can settle into their watery home: Eelume AS designed them to stay underwater permanently, in a little docking station on the bottom of the sea. From there, they can swim out to inspect and repair undersea infrastructure, like pipelines or oil rigs, without any concern about the weather above the ocean’s surface.

Watch the Eelume robot in action below: