Bitcoin is bonkers right now. Here’s why you shouldn’t count it out.

Better security and smart regulation is a good start. 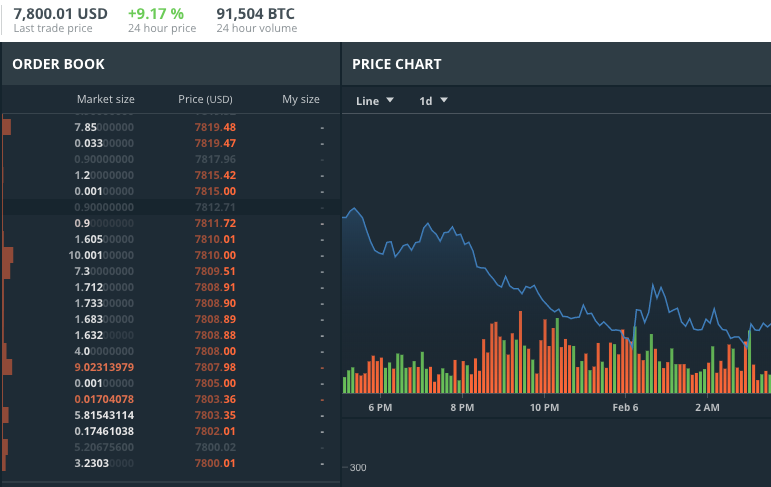 A view of the GDAX exchange on Tuesday. GDAX
SHARE

Bitcoin’s price is a moving target. In the short term, the cryptocurrency is plunging in value: from north of $17,000 a month ago, it crashed down to around $7,500 today. The fluctuations are enough to make anyone wonder: What’s going on?

In the simplest sense, Bitcoin’s price is determined through a process of price discovery on exchanges, like GDAX, where it and other cryptocurrencies are bought and sold. But the bigger picture is more complex. Many factors, like regulation, possible regulation, or comments from a government official can affect whether people want to buy in on the crypto game. And that affects the price.

One thing is clear, though. It’s been a “wild ride,” says Christian Catalini, an assistant professor at MIT Sloan School of Management who focuses on cryptocurrencies. After all, this time last year, the price of Bitcoin was around $1,000. It eventually shot up to over $19,000 before dropping down to its current value.

What fueled that giant spike? “It’s not clear how much of that was enthusiasm, hype, maybe even market manipulation,” says Catalini.

By market manipulation, Catalini was referring to doubts surrounding a cryptocurrency called Tether, which is ostensibly pegged to the U.S. dollar, and a related exchange, Bitfinex; both Tether and Bitfinex have been subpoened by the CFTC, or Commodity Futures Trading Commission, Bloomberg reported. The key question at hand with Tether is this: does it actually back each Tether token with a U.S. dollar, as it says it does?

But Tether isn’t the only issue. What follows isn’t a comprehensive list, but instead a look at some events that have transpired with Bitcoin and other cryptocurrencies lately that affect how people think about them—and whether or not they give into the animal spirits of the Bitcoin frenzy and make a buy. And, if some of these issues can be ironed out, the currency may just become stable.

Bitcoin is the most prominent cryptocurrency, but it is not the only one—others include Ethereum and Litecoin. Startups offer new coins, or tokens, in events known as ICOs, or initial coin offerings. One of the most prominent ICOs involved a token called Filecoin, for example.

But some ICOs are fraudulent. In an effort to figure out just how common those frauds are, Catalini led a research team that analyzed around 1,500 ICOs. He says that a conservative estimate is that somewhere in the range of 14 to 30 percent of those were “very likely to be scams.”

The Securities and Exchange Commission has taken notice of ICOs too, and its chairman has written about their risks to investors.

But at the end of the day, more regulations and protections for investors could actually make the cryptocurrency world more stable. “What’s useful is that as regulation will become more clear,” Catalini says, “that will actually allow the space overall to thrive.”

Like the SEC, Facebook also has had its eye on ICOs and cryptocurrencies. On January 30, it announced that it would not allow ads that hawked either of those two types of products on its platform. That’s because some of the companies behind those ads are “not currently operating in good faith,” Rob Leathern, a product management director at Facebook, wrote.

“One cheap way [that] these scammers and fraudsters can pump these coins is by pushing ads,” Catalini ads. “You see an ad, and you think, ‘Oh, I missed on Bitcoin, and this is the next great thing.’ That’s exactly what we don’t need.”

Your credit cards are no good here

Don’t put your big Bitcoin purchases on plastic—that’s the new rule from big banks like Citigroup, Bank of America, and Chase; they will no longer allow people to purchase cryptocurrency with credit cards. A spokesperson from JP Morgan Chase told CNBC that the move was because of the “volatility and risk involved.”

After all, buying Bitcoin with cash you don’t have is “extremely dangerous,” Catalini says. The banks are “trying to stop people from buying cryptocurrency on borrowed money, which I think is a very good idea.”

Ensuring the exchanges are secure

Hackers reportedly stole hundreds of millions of dollars from a cryptocurrency exchange in Japan called Coincheck, and security breaches like that can also contribute to the market’s volatility—how good would you feel about your bank if it got robbed?

In fact, that’s a key issue that the cryptocurrency world needs to figure out, says Tyler Moore, an assistant professor of cybersecurity and information assurance at the University of Tulsa. He’s concerned about the “operational security risks of the platforms,” he says, referring to exchanges that either go out of business or get hacked, like Coincheck. He’d like to know what happens to customer money in these kinds of cases.

As for Bitcoin’s recent drop in value, and its steep rise before that, Moore says it’s unclear to him what caused either event. “There was a lot of hyped-up interest,” he says. “You have this classic bubble behavior where people start buying because they expect the price to keep going up.” That in itself can actually cause the price to keep rising—until it doesn’t any longer.