Protesting? There's a map for that. 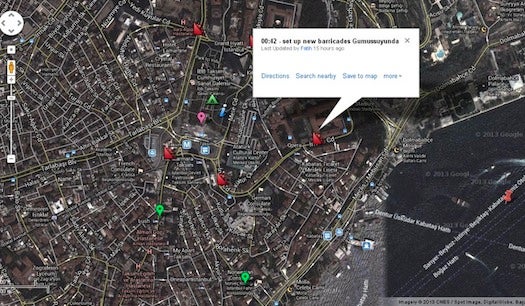 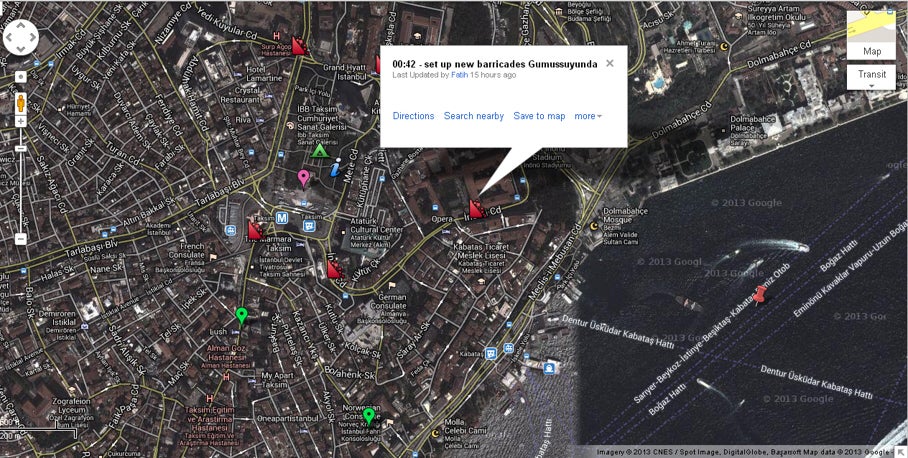 Consider it civilian reconnaissance. Protesters in Turkey are using Google Maps to track police movement, plot out barricades, and rally together.

Created Saturday, the map of Istanbul Police Movements centers on Taksim square, the heart of recent (and ongoing) protests against the Prime Minister Recep Tayyip Erdogan’s government. It began last week with trees and a barracks. Erdogan’s government plans to renovate an Ottoman barracks, a structure dating back at least a century, near the square. To get construction equipment to the barracks, officials wanted to raze trees from the nearby Gezi Park. Protesters prevented this, demonstrating in defense of the green space for over a week. Since then, protests expanded, evolving into a critique of the current ruling party.

Mapping protests and police response in real-time is a relatively new phenomena. In 2010, students protesting in London used a Google Map to track police action, documenting riot vans and helicopters moving against the protesters. But some features of the Turkish protests are straight out of Les Misérables, or indeed any number of historical protests. Barricades keep vehicles, police, and even horses away from the protesters, take time to tear down, and protect against thrown objects or gunfire, should the police response turn violent. In centuries past, governments brought in armies to quell protesters, and used cannons to knock down barricades. Paris, the site of so many protests, even underwent a major urban redesign with wider streets to make barricades more difficult.

In addition to the red triangle markers of barricades, here are some features of the map: