We the Best: Bill Nye Hangs with DJ Khaled

"They" didn't want the two to meet 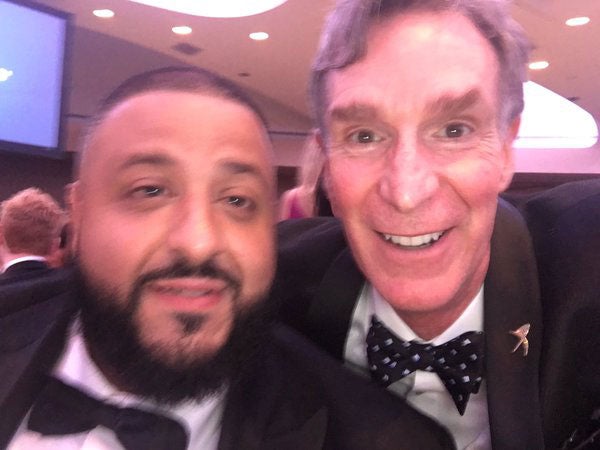 For years, DJ Khaled was known ostensibly for his music DJ-ing skills, his consistency (there has never been a Khaled track without the phrases “we the best!” or “another one”), and his ability to pull off matching T shirt-short combos in all sorts of color palettes. But in the past year or so, people began to pay attention to Khaled’s Snapchat account, which he uses to post video selfies and nuggets of cryptic, almost poetic spoken word wisdom. With over 6 million Snapchat followers to his name these days, the DJ-rapper found a new level of fame as a living meme, an oft-quoted character who might as well be one step away from taking all of his inspirational “snaps” and turning them into a self-help book titled They Don’t Want You to Win.

Nobody should be surprised then, that Khaled was a guest at the 2016 White House Correspondents Dinner, courtesy of The Huffington Post, and that he ran into none other than another celebrity guest: beloved scientist and entertainer Bill Nye, a perennial Popular Science subject who’s no stranger to memes in his own right. What happened when the scientist and the DJ crossed paths? Climate change real-talk, that’s what happened. Nye posted a selfie of the both of them on his Twitter account with the message: “”They” don’t want you to be concerned about climate change, but @djkhaled & I want you to be,” followed by a few relevant emoji.

It’s surprising the two would be seated next to each other, considering how “they” don’t Khaled to succeed, and likely don’t want Nye to either. We can only hope Khaled graced Nye with some of his catchphrases, and that Nye dropped some knowledge on the DJ (and vice-versa).