Now You Can Control Someone Else’s Arm Over The Internet

Hope your WiFi doesn't cut out. 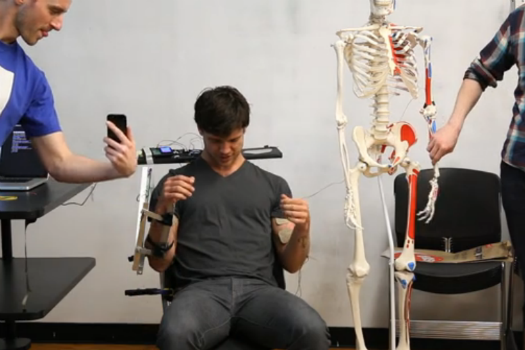 A group of graduate students in NYU’s Interactive Telecommunications Program have developed an open-source API that can allows you to move someone else’s arm remotely using a keyboard, a joystick or even an iPhone.

Open Limbs, “a platform for controlling human arms over the internet,” uses electric pulses to fire the nerves connected to muscles, making them contract, in conjunction with the Wilmington Robotic Exoskeleton (WREX), an orthopedic device designed to help people with weak muscles move their arms.

For their demonstration at the ITP annual spring show, Will Canine, one of the creators, attached electrodes to his arm to cede control over his nerves to a computer. When someone moved a model skeleton’s arm nearby, the electrodes caused his muscles to contract and his arm to mimic the movement of the skeleton. Alternately, the electrodes were attached to an infrared finger-tracking sensor, so that Canine’s arm could be moved just by moving a hand up in down in front of the sensor.

“We’ve been really interested in non-autonomous body control, so other people controlling your body,” Canine told Yahoo! News. “Usually people are really scared of this idea but we think it has some really interesting implications for people with paralysis or who can’t control their own bodies.”

Right now, the system is only effective at curling forearms and biceps–legs are too heavy–but the students hope it can be further developed to help people who can’t move their limbs autonomously.

See a demonstration below: