This fall, use weather data to see when birds are migrating near you

BirdCast's free online maps are like weather forecasts, but for avian migration. 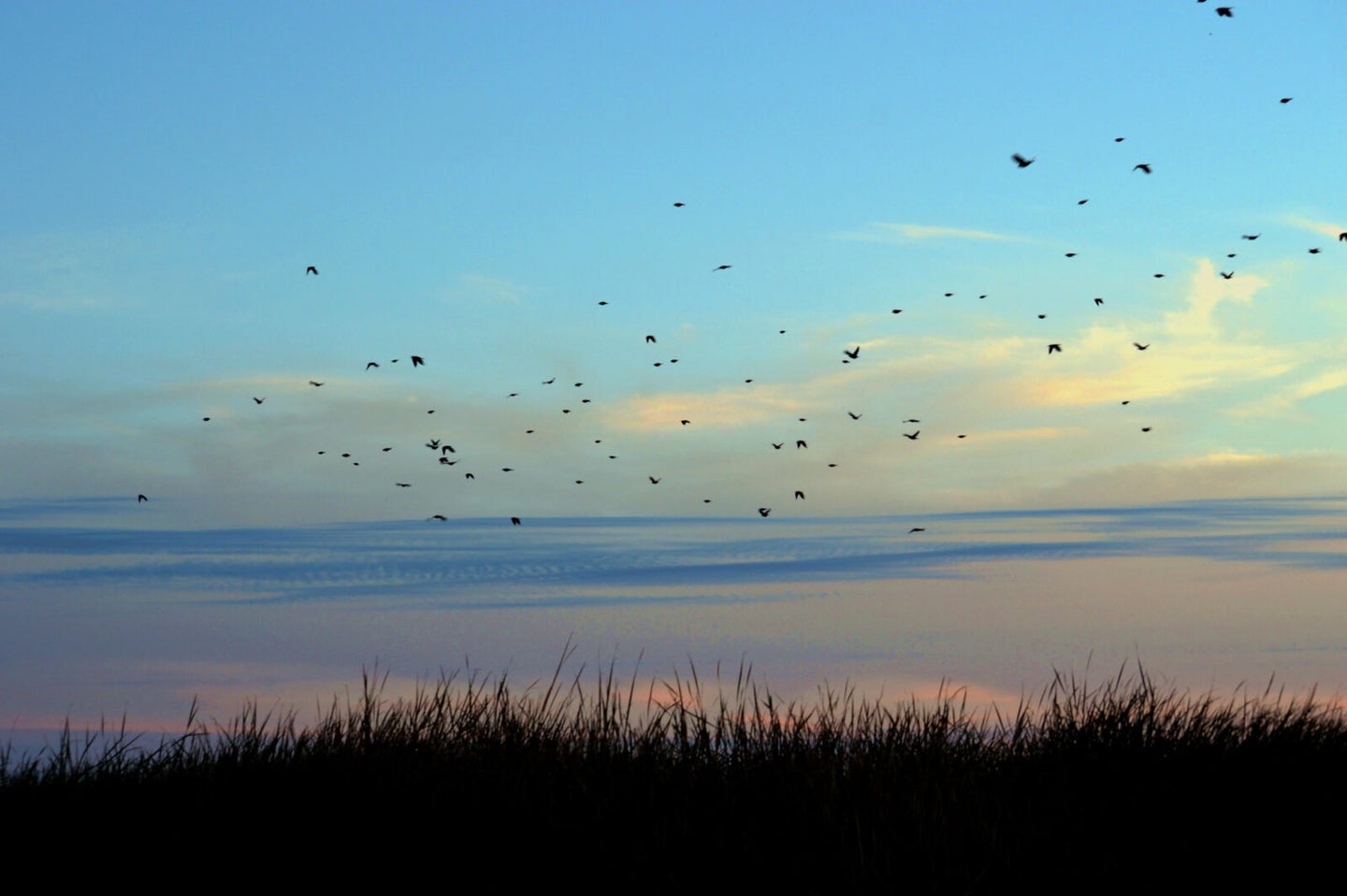 Millions of birds migrate overhead at night in the US. If you know when and where to look, you can catch the spectacle. Ryan Moehring / USFWS
SHARE

Over the next two months, hundreds of millions of birds will fly down the continental US on their way to winter nesting grounds. Some fall migrants will journey the length of Mexico, while others will cross the Gulf of Mexico to reach South America.

For the most part, birds take on their migration at night, nearly invisible far up in the air. But BirdCast, real-time software produced by ornithologists at Colorado State University and Cornell University, takes the nocturnal passage of those animals and turns it into maps that can guide you through the seasonal spectacle.

Birdcast uses a combination of radar from National Oceanic and Atmospheric Administration  weather stations—which detects bats, birds, and mayfly hatches, in addition to clods—and federal weather forecasts to predict migration hotspots. “Songbirds in general move in really broad fronts,” says Kyle Horton, an ornithologist at Colorado State University and one of the programs developers. Radar can spot individual flocks as they flap away from a roost, but from a continent-wide perspective, “you will see birds lifting off the landscape basically everywhere except big bodies of water.”

By pairing data on which conditions have favored migrations in previous seasons, BirdCast shows the swathes of North America where wind, rain, and temperature have made it possible for millions of birds to head south together all at once.

How it tracks birds

BirdCast offers both a retrospective on past fall and spring migrations and rapidly updated tools that look into the future.

The live map gives you a night-by-night view of how many birds were in the air across the country and where they were headed, stretching back to the spring of 2018. (Brighter and warmer colors mean more birds.) It also lets you compare a specific date to nocturnal flights from earlier years, and points out when your region is experiencing peak migration.

To see what’s in store, BirdCast’s developers recommend that you start with their three-day forecast maps. These offer a nationwide view of predicted migration hotspots—where birds will take off a few hours after sunset—over the next 72 hours.

“Being able to say however many millions of birds went over your state last night is a pretty cool thing,” says Mikko Jimenez, a PhD student in Horton’s lab. This isn’t just useful for ornithologists or birders, but helps explain migrations to everyday people: Recently, the Fox 10 news station in Phoenix used BirdCast data to depict migrations alongside its weather forecast.

After that, you can zoom in on your state or county on the Migration Dashboard. This tool shows how many birds crossed a county the previous night, based on radar readings, and how many there were in the air at the night’s most crowded moment. And if you’re interested in knowing exactly which species might be traveling through, the dashboard is integrated with Cornell’s eBird database, which reveals common avian sightings from the same time in previous years.

How it helps save birds

Jimenez, whose research focuses on how BirdCast can help protect migrating flocks, says the data is being used by conservation groups to direct campaigns that aim to reduce light pollution that hurts birds. Night-flying birds are easily confused by artificial light, especially from glass buildings, which can kill thousands of songbirds in a single night.

“You can focus ‘lights out’ campaigns on those big nights of migration, which I think is a huge game changer,” Jimenez says. BirdCast has formed partnerships with local nonprofits across the country, like Lights Out Texas, which convinced dozens of buildings in Dallas, Houston, and Fort Worth to turn off lights on key nights.

And while skyscrapers and other big reflective buildings present the most significant dangers to migrating birds, recent research suggests that turning off even some small fixtures measurably decreases the number of dead animals. If BirdCast indicates a heavy migration night in your area, you can help by, say, turning off your outdoor lights. “Individual action really does matter at a local scale,” Jimenez says.

“Light pollution is a simple fix, and if we change tonight, we’d have an immediate impact,” Horton says.

How to see bird migration up close

BirdCast can help you experience the thrills of fall and spring migration, Jimenez says, whether you’re a birder or not.

Just because birds mostly migrate at night doesn’t mean they’re impossible to spot. “I could be on my roof in Brooklyn … and literally hear birds migrating overhead,” Jimenez says. Think of it like an avian meteor shower, except you’re listening for the soft, high-pitched chirps flocks make as they pass overhead.

“You can also see the aftermath of that if you go out to your local park,” where the birds might stop over before taking off again the next evening, Jimenez says. “You can almost feel that it’s birdier.”

The maps can also show that migrating birds are probably relying on more habitats around you than expected. “I think migration is such a cool conservation topic, because a lot of conservation issues are far from home,” Jimenez explains. “This is one that’s literally flying over your house, over cities, over rural areas. Everyone weirdly plays a part.”