The Bed Bug: A Musical Muse

The bloodsuckers have infiltrated not just our bedrooms, but also our songs 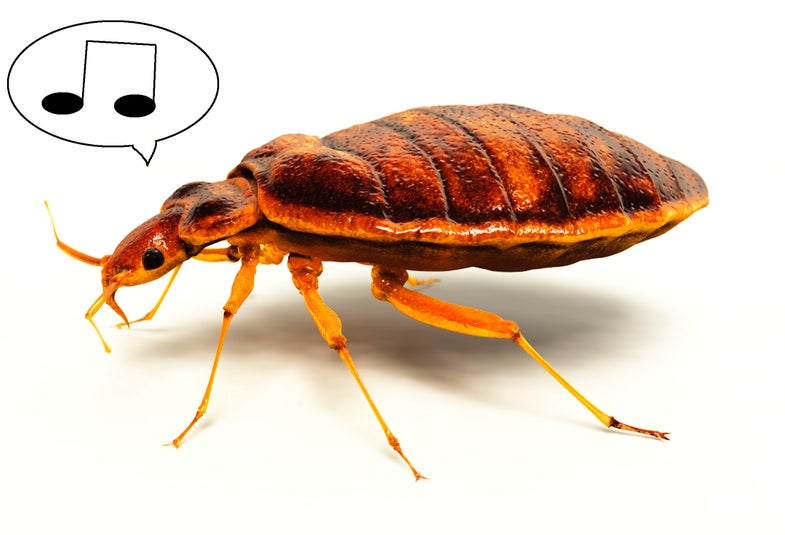 Over the past fifteen years or so, bed bug infestations surged worldwide. The bed bug’s return was, in part, thanks to an increase in global travel, insecticide resistance, and the fact that more of us than ever before are living in cities—a particularly good setting for bed bugs to thrive. But the pest also made a comeback in a less publicized way through our music.

Music, like all art, is a way to express emotion, and it can also be a vehicle to exorcise demons or obtain some sort of catharsis. Bed bug infestations cause substantial problems financially, physically, and emotionally, as well as spark or exacerbate mental illness. It’s no surprise that the bed bug has increasingly served as a musical muse in recent years.

What’s interesting about the bed bug’s presence in music is how it waxes and wanes over time—songs provide one more set of data to trace how the bed bug reigned, then faded, then bounced back. Over the several years that I worked on my new book Infested, I scoured music databases for songs about bed bugs. It’s an incomplete dataset, for certain. But it still provides intriguing hints at the bug’s presence through our songs.

In 1927, Furry Lewis recorded “Mean Old Bed Bug Blues,” which would become a classic also sung by Lonnie Johnson, Fats Waller, Bessie Smith and many others. Bed bugs were common during this era, and the misery they caused was a good topic for the blues. The song had such staying power that it persisted in different forms for many years, including a 1936 version by the Texas Troubadour Ernest Tubb. Other early bed bug tunes include popular calypso hits, such as the racy “Muriel and the Bug” and “Reincarnation“.

In the years following World War II, mainly thanks to DDT and other newly discovered synthetic insecticides, bed bug populations crashed in the U.S. and beyond. Soon the bugs were so rare that even urban entomologists and pest controllers didn’t typically encounter them in training or in work.

Of course, the bugs were still there—they just existed in pockets around the world, and thus didn’t play a major role in our collective consciousness. As you can probably guess, the bug wasn’t a popular musical topic during this time either, but it was still hiding in the occasional song. Updated tributes to old bed bug blues songs like this one by David Bromberg from 1975, popped up every now and again, and the bugs also appeared in the 1987 “Bed Bugs and Ballyhoo” by Echo and the Bunnymen, and lurked in the lyrics of the Rolling Stones 1978 “Shattered” (You got rats on the west side, bed bugs uptown…)

When the pest resurged in recent years, there followed a bed bug music explosion. Not only that, these were original bed bug songs, not tributes or covers, and the bug didn’t appear in the occasional lyric but were instead the featured star. The bugs have been a muse for hip hop, reggae, pop, punk rock, rhythm and blues, country, German synthpop, swing, jam bands, and indie rock. There are even bed bug show tunes, specifically from the recently Off Broadway rock opera BEDBUGS!!! (which I have seen twice, once when it was Off Off Broadway and again last year). At the height of my own obsession with bed bug music, I collected my favorites on a Tumblr, where I posted a new song every week for more than a year.

A song won’t get rid of your bed bugs, but it may help you laugh about them. I, for one, think they are wonderful.

Brooke Borel: Infested: How the Bed Bug Infiltrated Our Bedrooms and Took Over the World, University of Chicago Press 2015