In 1926, a young Salvador Dalí was lying in a Paris hotel room staring at an insect crawling on the... 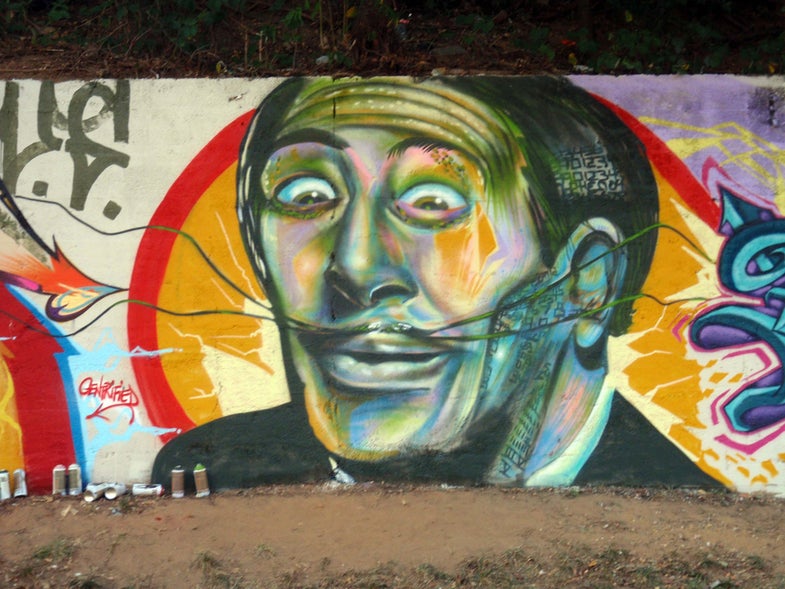 In 1926, a young Salvador Dalí was lying in a Paris hotel room staring at an insect crawling on the ceiling. This bothered him. Before he had fallen asleep, he had counted two, or maybe three, insects above him. If only one was left, where had the others gone?

Convinced that the crawling specks were bed bugs (or roaches or lice or ticks), Dalí frantically checked his sheets and his body to see if he’d been attacked during his nap. He found a small bump attached to his back and ran to a mirror to see if he could get a glimpse. He squeezed the bump with his fingernails to pull it off, but it wouldn’t move. He dug in, drawing blood. Still nothing. As as he writes in his autobiography:

It was as if it was formed of my own flesh, as if it constituted an inherent and already inseparable part of my own body; as if, suddenly, instead of an insect it had become a terrifying germ of a tiny embryo of a Siamese twin-brother that was in the process of growing out of my back, like the most apocalyptic and infernal disease.

And so, he did what anyone would do. Just kidding. He didn’t:

I made a drastic decision, and with the savagery proportionate to my frantic condition and my horror I seized a razor blade, held the tick tightly between my nails and began to cut the interstice between the tick and the skin, which offered an unbelievable resistance. But in a frenzy I cut and cut and cut, blinded by the blood which was already streaming. The tick finally yielded, and half-fainting, I fell to the floor in my own blood.

(At this point in the story, he’s decided it is a tick, although he switches back to a bed bug later).

Dalí collapsed on the bed, where the chambermaid found him wrapped in a bloody sheet. She called the hotel manager, who called the doctor:

The doctor arrived. But everything had become clear to me before he came. It was neither a bed bug nor a tick nor a cockroach nor a Siamese-twin that had been stuck to my skin—all this had existed only in my imagination.

Rather than a biting arthropod, Dalí had chopped off a piece of his own skin, a raised birthmark. Cringing yet? Good. I picked this story in time for Halloween. So, you’re welcome.

What exactly happened here? Although the disorder hadn’t been named yet, Dalí, an entomophobe, was likely suffering from delusory parasitosis or Ekbom syndrome, named for the Swedish neurologist Karl Ekbom, who first published accounts of it in the late thirties. People with the disorder think insects, worms, parasites, or mites are biting them or burrowing into their skin. Sometimes, they actually have a medical condition causing the itching or tingling, which could be anything from an allergic reaction to skin cancer to hypothyroidism. Here, a simple visit to a doctor can help with a correct diagnosis.

But in cases where there is no apparent medical condition, people with Ekbom’s have been known to bounce from one expert to another—doctors, entomologists, parasitologists—mailing or delivering envelopes or plastic baggies full of lint and dust, convinced the debris contains pieces of their tormentors. When one expert finds no evidence in the dirty offerings, Ekbom sufferers just move to the next one.

Sadly, many people with Ekbom syndrome never seek psychiatric relief. They also often take the same route as Dalí, using tweezers, scissors, or knives to dig or cut the perceived insects out of their skin. Or, they may turn such instruments onto others, including pets. At the 2012 National Conference on Urban Entomology (yes, I go to such gatherings), I heard a story from Nancy Hinkle, a veterinary entomologist, about a man who brought his dog into the clinic on account of a tick infestation. The man had unsuccessfully tried to remove the ticks with pliers. The entomologist informed him that the “ticks” were actually nipples, to which he responded: But it’s a boy dog.

And now, having no better kicker, I leave you with the trailer for Bug, a 2006 horror flick directed by William Friedkin of The Exorcist fame and starring Ashley Judd and Michael Shannon. It’s almost as if the movie were made to torture poor souls with Ekbom syndrome, and I wonder if cases shot up when it was out. To be honest, I kind of want to watch it but also keep putting it off because, even as a person without Ekbom syndrome, it terrifies me (They live in your blood…and they feed on your brains!!!).

Ekbom Syndrome: A Delusional Condition of “Bugs in the Skin,” by Nancy Hinkle (2011)

The Infested Mind: Why Humans Fear, Loathe and Love Insects, by Jeffrey Lockwood (I’ll have a Q&A with this author up next week)