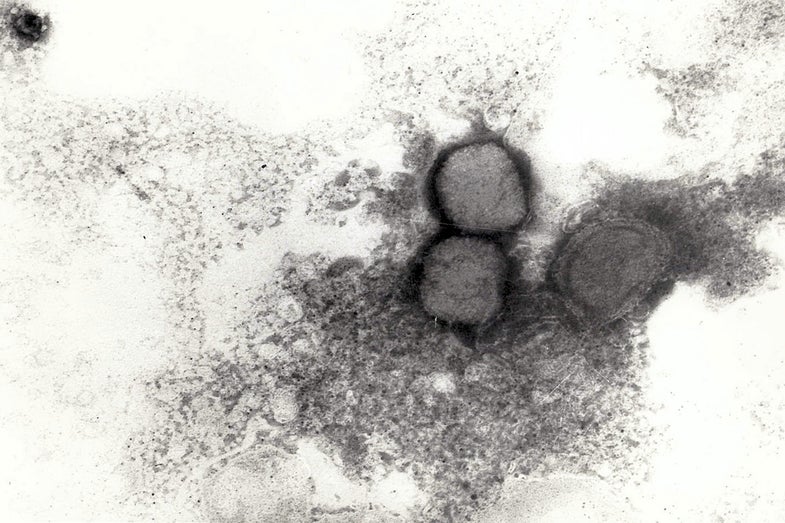 When my book Infested published last month and I started revisiting some of its stories during interviews, I was reminded of those I didn’t include in the final version. Some just didn’t pan out, and others didn’t fit into the overall theme—a popular science, cultural history, and adventure tale exploring where the bed bug came from and why it surged back in recent years. I’ve thought of one of these cast-aside stories—a tale of bed bugs and smallpox—on and off for months, particularly as the measles outbreaks in California and elsewhere ramped up national discussions about the vaccine-skeptic movement.

What do bed bugs have to do with vaccines? Not too much, in reality. But in the early 1900s, at least one doctor thought bed bugs were the sole source of smallpox and that vaccination was overblown at best and a dangerous boondoggle at worst. And although his evidence was flimsy, his claims live on in their own way in the form of shadowy Internet conspiracy theories.

The Half Million-Dollar Bed Bug

During my early bed bug research, I came across a small book called Bacteria, Inc. In Which is Told the Story of New York’s Half Million Dollar Bedbug by Cash Asher, which first published in 1949. Intrigued, I ordered it. The book is long out of print, and when my copy arrived it was musty and had a homemade cover of brown construction paper.

The pricey bed bug in the title, according to Asher, was from a 1948 article in Hearst’s International-Cosmopolitan Magazine: “Smallpox, the Killer that Stalked New York.” The article chronicled a smallpox scare in the city the year before. A man returning from a trip to Mexico came down with smallpox despite the fact that he had been vaccinated as a child, and his diagnosis prompted the vaccination of millions of New Yorkers at a cost of around half a million dollars. (Not everyone agrees on the number of vaccines administered at the time.)

In Asher’s account, the wife of the man with smallpox found an insect in his clothing and, thinking it may be related to his illness, brought it to his doctors. They told her it was only “the common and harmless bed bug.”

Asher insinuates the bed bug wasn’t at all harmless, citing a doctor named Charles Campbell who had allegedly proven, a half a century prior, that the only way smallpox could spread was through the bug’s bite. Asher wrote that Campbell “stated the disease is neither infectious nor contagious, and declared that vaccination does not prevent smallpox.” Asher also referred to vaccinations as “pollution in the needle” and tried to link them to the “lucrative part” of doctors’ practices. He also authored such books as Your Life Is In Their Hands and The Doctor Could Be Wrong. So there’s that.

I dug up Campbell’s original bed bug and smallpox papers, which are mostly contained in a 1925 book called Bats, Mosquitoes, and Dollars. (In addition to bats and bed bugs, the book covers dragonflies and the functions of the spleen. The April 1926 issue of Science magazine gave it a skeptical and tepid review.)

In his book, Campbell is indeed wary of the smallpox vaccine, and although he is careful not to rail too strongly against the practice, the colleague who wrote the book’s forward is more frank. The latter calls vaccines “objectionable” and asks: “While the great mass of humanity may have benefited by that practice, many individuals have suffered greatly and even died from the poisons vaccine sometimes introduces into the blood. The writer has long felt that he would far rather risk catching the smallpox than undermining his health by taking into his system a poison that might have much worse effects than those of la petite vérole.” (This sounds familiar. Modern vaccine skeptic Jenny McCarthy, for example, once infamously said: “If you ask a parent of an autistic child if they want the measles or the autism, we will stand in line for the f–king measles.)

Campbell may not have written as adamantly against vaccines as his peer, but he did chronicle what he claimed was vaccination’s ineffectiveness and potential danger. And his attempts to connect bed bugs to smallpox were both dubious and highly unethical.

In the early 1900s, Campbell tried to raise money to travel to Mexico and test his smallpox hypotheses on prisoners. No one would fund him, in part because of the thorny ethics of experimenting on humans, and so he eventually ended up at the Pest House in San Antonio—essentially quarantined living quarters for smallpox victims and their families. There, he proceeded to expose his family, friends, and patients to smallpox, sometimes without their knowledge, in an attempt to prove that the virus did not spread from person to person or through contact with contaminated clothing or objects, as was commonly believed.

In one experiment, Campbell helped day workers tear down an outhouse that had been used solely by smallpox patients, and secretly contaminated the workers’ drinking water with dust and debris from the structure. In another, he allowed an unvaccinated four-year-old to interact with a pox-covered infant for an entire day. And he also observed a girl with smallpox play with a new doll, which her father then returned—unwashed—to the shop. The men kept the clerk who handled the doll “under secret observation for a long time, but nothing developed from the exchange.”

In all of these cases and many others, Campbell claimed no one was infected by smallpox. And in other observations, he alleged that the illness was only spread from person to person when their living quarters were infested with bed bugs.

Not only are these methods disturbing, the experiments don’t really amount to much—they are basically a collection of poorly designed case studies, with no control and no follow up research that might more definitively tie the insect to the disease. If Campbell ever experimented directly on bed bugs—opening them up to find the smallpox virus inside or attempting to observe the spread the disease through, say, animal studies—he didn’t write about it.

In a separate 1936 study, researchers did try to explore this connection. They let bed bugs feed on rabbits infected with smallpox. A summary of the research suggests that the virus survived in the bugs’ saliva and hemolymph—the insect equivalent of blood—for a maximum of 12 days, where it was able to multiply and then transmit to an uninfected rabbit. Still, whether the bed bug can transmit smallpox to humans is unknown—a rabbit isn’t a person, and a controlled laboratory setting isn’t a bedroom. There have been dozens of similar studies over the past many decades attempting to connect bed bugs to a range of pathogens—leprosy, anthrax, plague, hepatitis B, HIV, and many more—and so far, none have definitively shown that the bugs can pass any illness to people.

Still, even if a bed bug might be capable of spreading smallpox to animals or even to humans, Campbell’s claim that people with smallpox weren’t contagious isn’t true. In 1988, the virologist Frank Fenner, an expert on the genus of viruses called orthopoxviruses, which includes smallpox and similar pathogens that strike a range of animals, co-published a definitive text “Smallpox and its Eradication” for the World Health Organization. The work spanned 31 chapters and discussed data-backed research on how smallpox spreads, including tissue and fluid samples from actual smallpox patients and animal models infected with analogous viruses. The book also traced, among other things, epidemiological and historical smallpox accounts. These studies compellingly laid out the evidence that smallpox passes directly from infected people, either through the respiratory tract or contact with bodily fluids. (There are, of course, many other papers on smallpox, how it spreads, how the smallpox vaccine works, and so on.)

Campbell also wasn’t right about the smallpox vaccine. By 1977, health officials had wiped out the last of the virus in the wild—that is, naturally-occurring smallpox in people—through a massive global vaccination effort, a world’s first. Scientists continued to study the virus in the lab, however, and a year after its eradication it took one last life in an unfortunate accident. In that case, researchers working with smallpox weren’t cautious enough, and the virus may have escaped the lab and worked its way into the ventilation system, infecting and ultimately killing a woman on another floor. (Following Campbell’s logic: Could a bed bug have snuck into the smallpox lab, ingested the virus even though it only eats blood usually from living animals, and then traveled to a separate floor to bite the woman in her office? Unlikely.)

Today, smallpox survives only in high-security labs in the U.S. and Russia (and, perhaps, elsewhere, like the forgotten corners of FDA research storage).

The bed bug, of course, lives on unchecked.

You know what else lives on? Campbell’s research. His work may not be widely known, but when I went online to find his papers, I found references to him scattered across the Internet, both in bizarre conspiracy theories and on vaccine-skeptic websites, where he is offered as an unsung hero against vaccination.

Asher, Bacteria Inc: In Which is Told the Story of New York’s Half Million Dollar Bedbug, (Bruce Humphries Inc Publishers, 1949)