Bed bug infestations exploded over the past 15 years or so, opening a relatively new market for all kinds of... 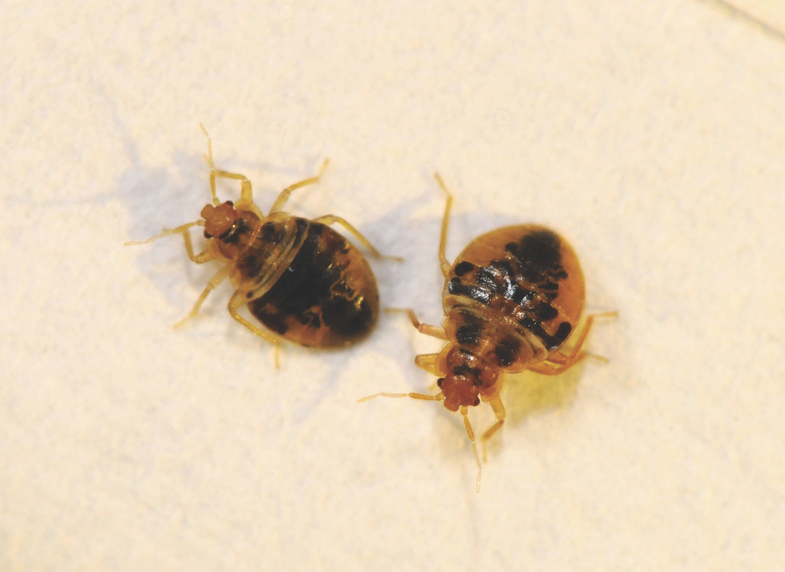 Bed bug infestations exploded over the past 15 years or so, opening a relatively new market for all kinds of products. There are bed bug traps, so-called all-natural sprays, mattress encasements—thousands of options of varying worth. There are also chemical insecticides, including both over-the-counter and professional grade products. The most common class of insecticides used on bed bugs are pyrethtroids, a synthetic version of an ancient remedy made from crushed chrysanthemums.

Today, new research on one of these bed bug products—a mattress and box spring liner impregnated with a pyrethroid called permethrin—published in the Journal of Medical Entomology. The study showed that the cover, called ActiveGuard, may cause some unusual behavior in bed bugs that could curb their eating habits and lead to lower numbers of eggs. But there are some caveats to consider.

First, though, let’s talk about the study. A team at the Ohio State University, led by entomologist Susan Jones, tested five populations of adult virgin female bed bugs on the ActiveGuard fabric. The researchers weighed the bugs, put them in a petri dish with either treated or untreated fabric (the latter as a control), kept them on the fabric for one or 10 minutes, and then took them off and offered them blood from an artificial feeder for half an hour. The researchers then weighed the bugs to see how much blood they’d eaten and put them into an enclosure with a male and watched to confirm whether they’d get busy with some traumatic insemination. Then, the researchers monitored the females to see if they’d lay any eggs.

The bugs that were on the treated fabric for 10 minutes were significantly less likely to feed compared to those that sat on it for one minute, and when they did feed it was a significantly smaller amount of blood (there was no difference in the control set). And out of the females that sat for 10 minutes on the ActiveGuard, only one out of 52 laid any eggs.

The results suggest that exposing a bed bug to an amount of insecticide that doesn’t kill them outright might have some positive effects on the bug’s behavior, at least from our perspective. “Sublethal effects are something that is extremely important,” says Jones. “We usually use death as the final outcome in our laboratory trials, but this suggests we that we should be looking at other things as well.”

But here’s the caveat. Exposing a population of insects to sublethal amounts of insecticide may be akin to stopping an antibiotic treatment too early, which leads to drug-resistant bacteria. “Exposing bed bugs regularly to sublethal concentrations could promote greater levels of resistance,” says Rick Cooper, an entomologist at Rutgers University.

Bed bug insecticide resistance is already a problem worldwide, in part because of the overuse of pyrethroids and, when it was still legal, DDT. Adding more of the same insecticides to the already overflowing pot will likely lead to more of the same, although the exact effect of sublethal pyrethroid exposure on bed bugs over time is unknown. If sublethal exposure does exacerbate resistance, though, even the lone female to lay eggs in the OSU study could pose a problem. Previous research has show that it only takes a single mated female to spark a new bed bug infestation.

And, if the covers were used regularly used in badly infested homes, there would be a higher chance of driving resistance, because a larger population of bed bugs would be exposed to insecticide.

According to Stephen Doggett, a medical entomologist at Westmead Hospital in Australia, permethrin-impregnated mattress covers are “one of the most controversial devices in the marketplace today for the management of bed bugs.” Doggett adds that permethrin is one of the oldest pyrethroids, which means bed bugs have had more of an opportunity to build resistance over time.

Joe Latino, the president of Allergy Technologies, which sells ActiveGuard and also funded the OSU study, says the liners are not intended for large infestations, but for either prevention or for the latest stage of a treatment, when there are very few bed bugs. “We can’t mitigate against off-label use, what can I say, it is clearly not labeled as a frontline tool,” says Latino. “Now does that mean to suggest that people haven’t used it to test in the field that way? I’d be foolish to believe that isn’t the case.”

This underscores the importance of reading product labels: if a product says it isn’t for use in a big infestation, don’t do it.

In the meantime, it’d be helpful to test permethrin-impregnated covers over time to make sure sublethal exposures don’t contribute to resistance. “These are certainly promising results,” says Ed Vargo, a molecular ecologist and entomologist at Texas A&M. “Ideally, I would want to see studies carried out over several generations on a number of populations to make sure that populations don’t develop resistance to this treatment method.”