Here, I unveil an Our Modern Plagues series, which was inspired by Stephen Colbert’s recurring segment Better Know a District.... 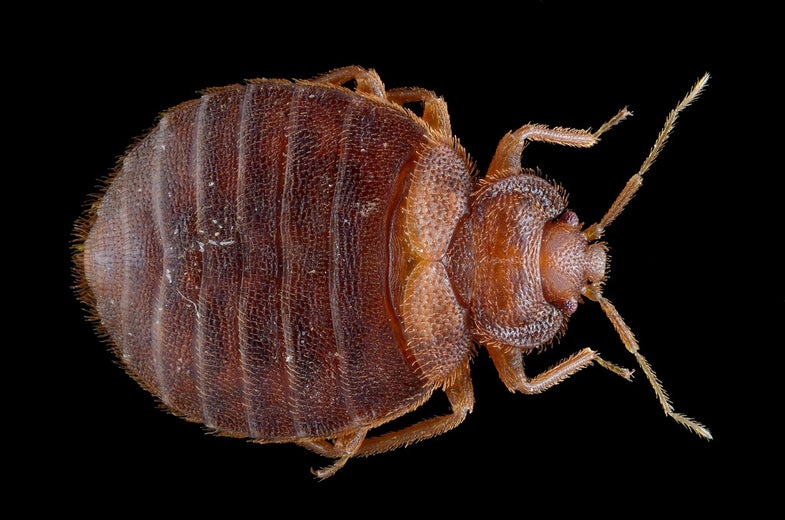 Here, I unveil an Our Modern Plagues series, which was inspired by Stephen Colbert’s recurring segment Better Know a District. My version—Better Know a Plague—will introduce you to a plague-like critter every month or two, whether it is something we really need to worry about or whether it’s just a bug or parasite that makes us squirm psychologically. A complementary series called Better Know a Fix will explore some of the interventions we use to combat these plagues.

To start the series, I present the common bed bug, Cimex lectularius. I picked the bed bug for two reasons. First, it’s an age-old pest with a recent widespread resurgence. Second, I am writing a book about bed bugs, which makes it an easy target.

The bed bug is a temporary ectoparasite. “Parasite” means that it makes its living by leeching nutrients from another organism. In this case, that organism is you or, occasionally, birds or bats or house pets. The nutrients come from blood. Ecto- means “on the outside,” so this is a parasite that lives outside of its host’s body. Temporary means that, unlike lice or other permanent ectoparasites, bed bugs don’t live on their host, instead only dropping in to feed.

Bed bugs are also called obligate parasites because to make it through each step of their five-stage lifecycle, they require a blood meal (actual scientific term and awesome potential band name). Female bed bugs also must have a blood meal before they are able to lay eggs; the more blood they eat, the more eggs they can make. Usually, they will lay around 100 or 200 in their lifetime. Bed bugs also appear to be immune to inbreeding, which usually amplifies genetic defects. This means a bed bug infestation can arise from a single fecund female.

The bed bug carries out a secretive life. When it isn’t feeding, it hides in tight spaces. It’s true that these spaces are often the seams of a mattress or the corners of a bedframe, but the bugs will also hide in any available crack—the head of a screw, a picture frame, or even a clock radio. Or, perhaps, a suitcase or a purse, which is how they spread between homes, hotels, and virtually any other place where people hang out.

Bed bugs usually feed at night and hide during the day, but they aren’t truly nocturnal. If their host’s sleeping patterns change, so will the bugs’ feeding schedule.

We thought we wiped out the bed bug in the US after World War II and the advent of DDT. In the UK, experts credit a similar dip to the demolition of infested public housing in the 1930s (DDT probably contributed in the following decades). The precise reason why bed bugs resurged over a decade ago isn’t entirely known, but it is likely a combination of insecticide resistance, an increase in travel, and changes in pest management tactics.

Although the bed bug’s comeback was a shock to many, we actually share a long history. In 1999, a team of paleoecologicists and archaeologists published a paper describing preserved bed bug remains found at an Egyptian site that dates to 1352 BCE. Specialists theorize the bugs have been with us far longer, possibly first feeding on our ancient relatives 100,000 years ago during the Pleistocene. The hypothesis suggests that when early hominids started living in caves in the modern-day Middle East, bat bugs feeding off those bats shifted attention from one host to the other, and then followed us ever since.

However long we’ve lived with bed bugs, their resurgence over the past 15 years or so is more of a return to normal than an anomaly. Today, the bugs are in every state in the US and 99% of American exterminators treated for them over the past year, up from 95 percent in 2010, 25 percent a decade before, and 11 percent before that. In Australia, the bugs jumped an estimated 4500% between 2000 and 2006. Similar trends are seen in Europe and in parts of Asia, and although some argue the bug’s spread is slowing down, it is still moving from large coastal and cosmopolitan centers to smaller cities and towns further inland.

Bed bugs aren’t known to spread disease, although the possibility hasn’t been entirely ruled out. Still, even if they’re capable of spreading pathogens, it isn’t likely a disease would spread very far. Even though they’re good hitchhikers, most individual bugs spend their entire life in a single room or home feeding on a small number of people, which isn’t the ideal environment for a pathogen to spill over into the population.

I could go on (and on and on). I won’t. But if you’d like to even better know the bed bug, I leave you with the terrifying details of bed bug sex (including a self-penned limerick), new research on how hairy bean leaves might lead to new traps, how researchers are using DNA to track the bug resurgence, a dubious bed bug pill, how to feed bed bugs on blood in the lab, why they are so hard to kill, and why, despite all these efforts, we’ll probably never get rid of this particular modern plague.

After coming up with this series and writing the first post, I realized that there is already a Better Know a Fish blog by Ben Young Landis. So if you’d like to better know any fish, please do go check out his work.

For more on the bed bug’s lifecycle and what it looks like, see the bed bug fact sheets from the University of Kentucky or Virginia Tech (also available in Spanish)

For the fascinating history of how we’ve tried to kill bed bugs, check out “The History of Bed Bug Management—With Lessons from the Past,” by Mike Potter.

If you think you might have bed bugs and are seeking advice, I recommend searching or posting at Bedbugger.com