Meet the marine geologist mapping the deepest point on Earth 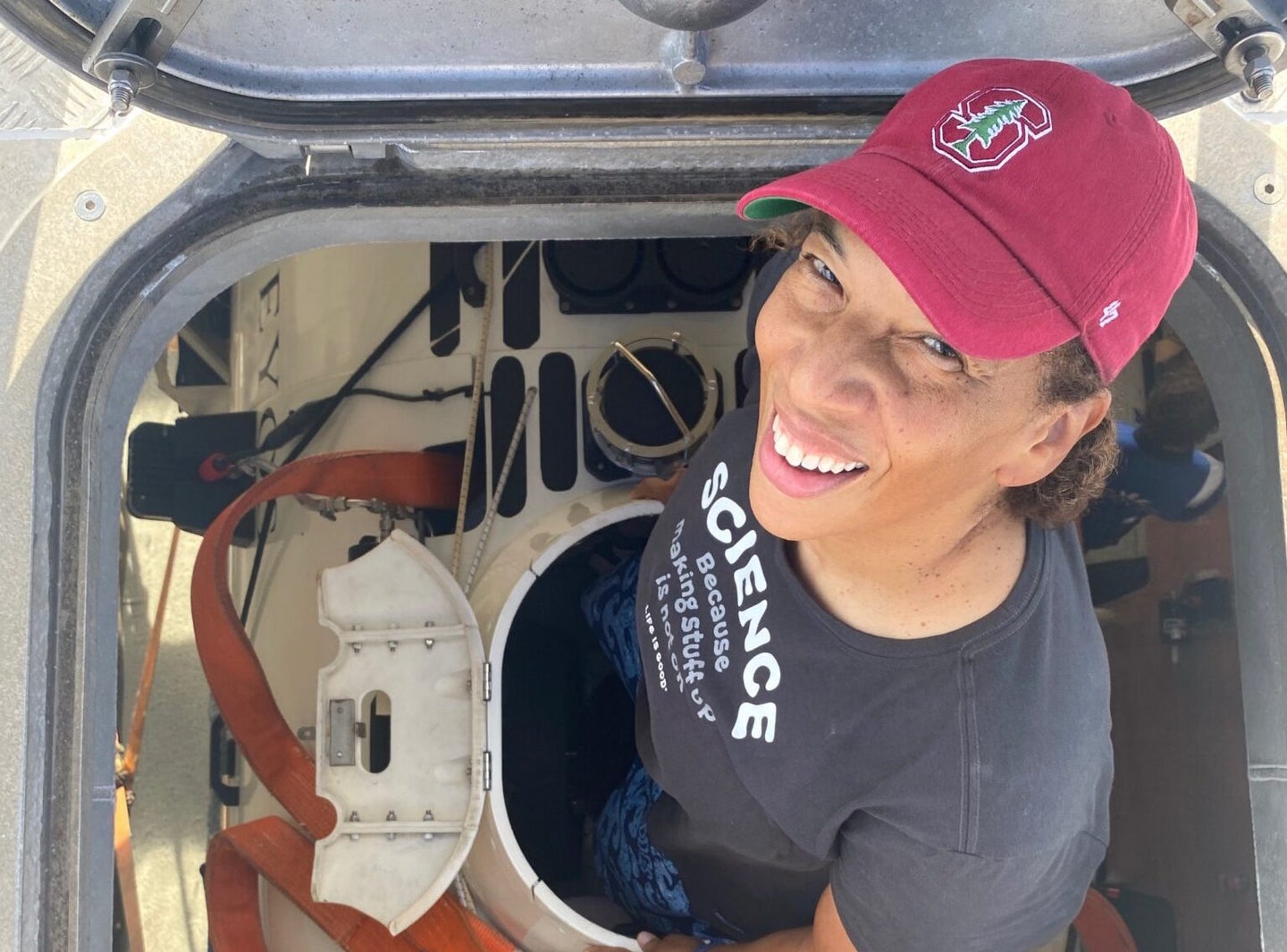 Dawn Wright, marine geologist and Esri chief scientist, embarked on a mission into the deep. Courtesy of Dawn Wright
SHARE

When Dawn Wright plummeted to the bottom of the world in a nearly indestructible chamber, the sable abyss of the ocean reminded her of the vast darkness of space. Deep in the middle of the Pacific Ocean, Wright dove to a point on the Earth few humans have ever dared to lay eyes on. Her mission: to map a slice of the mysterious Mariana Trench.

“These are places that are extremely hostile, that are not where humans are made to inhabit,” says Wright, a marine geologist and the chief scientist of Esri, a mapping-software company based in Redlands, California. “But we now have the technology to explore these spaces.”

[Related: Inside Five Deeps’ record-setting quest to reach the bottom of each ocean]

In July, Wright made history as she became the first Black woman to descend more than 35,000 feet down to Challenger Deep, a region of the Mariana Trench in the western Pacific Ocean and the deepest known point on the planet. Marine scientists like Wright have spent decades trying to chart its dark, strange depths, with varying degrees of success. Yet the quest to conquer Earth’s watery void has the potential to unveil secrets about our own planet’s well-being, and shed light on the secrets of other worlds. That’s why Wright chose to embark into the ocean’s uncharted universe. Every new discovery found during the mission to Challenger Deep will contribute to the Seabed 2030 project, a United Nations initiative that aims to produce a publicly available map of the entire world’s ocean floor by the year 2030.

“It’s like a postage stamp or a piece of a puzzle,” Wright says. “The puzzle is not complete until all of the pieces are found and put into place.”

Discovered in 1875 by the HMS Challenger, Challenger Deep lies on the southern end of Mariana Trench. The curved shape of this ocean canyon is considered a structural marvel: The entirety of the trench is located in a place where the Pacific tectonic plate subducts, or bends and sinks below the Philippine plate. The recent mission narrowed in on a relatively unexplored area of Challenger Deep called the Western Pool. Its geology, which has seldom been scouted compared to other areas of the trench, was surveyed to discern how its structure differs from the rest of the seascape.

Journey into the dark

The pressure at the bottom of the ocean is about 16,000 pounds per square inch, about the equivalent of 25 jumbo jets flying at full weight capacity, Wright says. Typical submersibles usually descend very slowly to reach their objective, but because it would take too long to reach their destination far beneath the surface at a normal pace, Limiting Factor descended rather quickly, at a rate of about one to three knots, or one to three nautical miles per hour. That’s equivalent to an elevator dropping down about 100 to 300 feet per minute in a residential building. (In other words, it’s a pretty smooth ride.) Trunk pumps churn water into an empty chamber above its titanium hatch, and as the water constantly pushes the air out, the submarine descends into darkness. But it isn’t an uncontrolled fall: Thrusters on each side of the craft allow the pilot to move in any direction needed to scour the seafloor.

Once below, the submersible used sonar to take grayscale topographical images of the area. Normal sonar instruments don’t operate well more than four miles deep, which until about 330 feet deep, is still considered the surface ocean. But Wright, who was responsible for operating the tool as the mission specialist, says the side-scan sonar system they utilized was specifically designed for their submarine. Compared to ordinary sonar, side-scan sonar uses two beams of sound to create a higher resolution picture of its surroundings, unlike the singular cone-shaped beam of sound a typical sonar uses. Earlier this year, the same system was used to discover the sunken USS Destroyer Escort Samuel B. Roberts, the deepest shipwreck ever found and properly identified. Wright’s expedition was the first to operate the system at full-ocean depth, or as deep as humans have ever gone.

Down in Western Pool, the craft, along with a small lander, spent hours shooting video of the cavern, taking water samples, and even made observations of local biology like jellyfish, shrimp-like crustaceans known as amphipods, as well as plant-like colonies of animals called hydroids. During this micro-survey, Wright was able to create detailed contour maps of the area that will eventually be used to help scientists understand our planet’s health.

The sea, the sky, and beyond

Today, less than 25 percent of the ocean has been surveyed to modern standards, meaning with the most up to date ocean-scanning technologies. Having such a definitive, data-intensive map helps scientists learn more about how climate change is affecting Earth’s marine bodies. “Extremes in our weather all over the world are being moderated by the ocean,” Wright says.

[Related: How a two-person sub and a repurposed Navy ship discovered the deepest shipwreck yet]

The sea absorbs about 25 percent of all the world’s carbon dioxide—and without these essential carbon sinks climate scientists say global warming would be infinitely worse. That’s why the health of the ocean—especially its furthest reaches—are important indicators of irreversible global damage, like climate change.

“The more than we know about these deep places, the more that we’ll know the details of how these processes are indeed cycling,” Wright says.

From space, it’s easy to see that Earth is primarily a water planet. Data gleaned from the deep ocean is helping scientists explore alien oceans and other Earth-like environments on nearby planets. For instance, Lia Siegelman, an oceanographer at Scripps Institution of Oceanography at UC San Diego says that using the laws of the ocean to study the physics of other worlds offers a unique perspective to understanding our place in the cosmos. For example, using imagery captured by NASA’s Juno mission, Siegelman recently discovered how Jupiter’s polar energy system resembles cyclones on Earth.

“By linking two geophysical bodies, you can ask questions about our planet,“ she says. “This universality of things is something that I find very rewarding and fascinating.” As space and ocean technologies continue to develop in the future, Siegelman hopes to one day have the opportunity to use her knowledge to study and compare the ocean habitats of distant icy moons, like Europa or Callisto. Finding connections to faraway oceans in our solar system and galaxies beyond could also help researchers better understand the intricacies of our universe. “It’s a great time to be an oceanographer when you could probably, hopefully soon, look at the ocean circulation on other planets or other moons,” Siegelman says.

But back home, the vast ocean remains one of the most important habitats to be explored. Wright hopes her journey into Earth’s maw motivates others to follow in her footsteps, and beyond. “They can look to me as someone who has paved the way for them.”