Scientists wanted to understand how baobab trees live for thousands of years. Then the ancient trees started dying.

The culprit is still unknown—and at large. 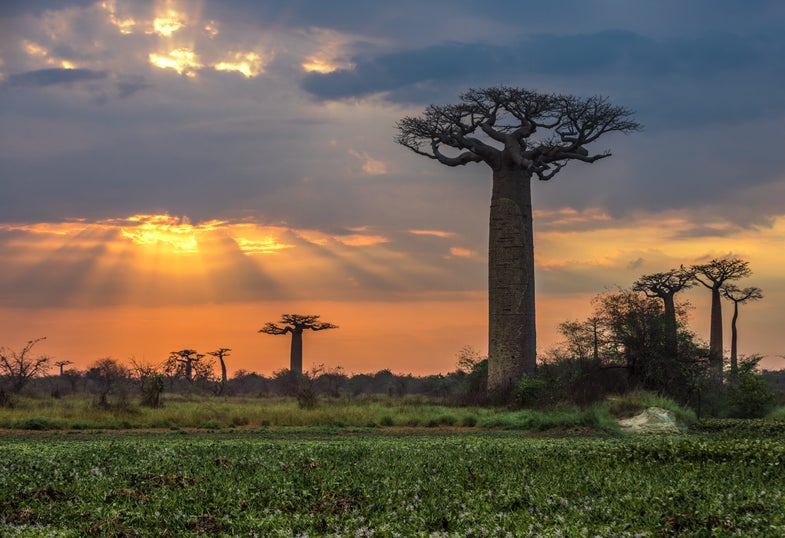 Baobabs are an iconic part of the sub-Saharan landscape in Africa. Wielding gnarled branches that can spiral up to nearly 100 feet into the air, and with bloated trunks that send out branches spanning an average of 65 feet all together, the baobab is a vital part of the region’s ecology and a celebrated staple Africa’s culture. And like most celebrated parts of the natural world, the baobab suddenly finds itself threatened in modern times.

The oldest African baobabs (between 1,100 and 2,500 years old) are dying abruptly, according to a new survey of the species published Monday in Nature Plants. The numbers are grim: 8 of the 13 oldest and 5 of the 6 largest trees on record have died or experienced deterioration over the past 12 years.

The culprit is still unknown—and at large.

“Baobabs are peculiar trees, with unique architectures, remarkable regeneration properties and high cultural and historic value,” says lead author Adrian Patrut, a chemist Babes-Bolyai University in Romania. “They’re the oldest and largest angiosperms. The impact of their loss would have profound consequences on many levels.”

Baobab age has always been a difficult thing to tabulate, since the trunks produce only faint growth rings. Recent breakthroughs in radiocarbon dating suggests they can live about 3,000 years. The Panke Baobab in Zimbabwe was estimated to be around 2,500 years old—the oldest on record—before it died in during 2010 and 2011. Nothing lives forever, but the latest spate of deterioration and death among the species’ oldest members is unprecedented.

Between 2005 and 2017, the research team identified and dated more than 60 of the oldest and largest known individual baobab trees throughout southern Africa, initially in a quest to understand how and why they grow so big. The team probed each tree and assessed girth, height, volume, age, and relative health. That’s when they noticed the oldest were dying off surprisingly quickly during the survey’s run, sans any sign of disease.

The biggest suspect, of course, is climate change. “Paleoclimate evidence suggests that baobabs are adapted to wetter, drier, and colder conditions, but possibly not to hotter conditions,” says Patrut. Large trees need more water, and when that water isn’t available, the wood gets weaker, especially in larger and older specimens. “We suspect that an unprecedented combination of temperature increase and extreme drought stress were responsible for these demises.” And in other cases climate change may have induced extreme weather events. For instance, Botswana’s Chapman’s Baobab, which died in 2016, flushed leaves and produced flowers well before the rainy season started. “Having depleted its water resources, it was no longer able to stay erect, and collapsed,” he says. “That year, the rainy season was several months late and many animals died. Witnesses claim that birds even dropped dead out of the sky.”

The new findings, troubling as they are, are unsurprising. “Southern Africa is one of the fastest warming places on the planet,” says Patrut. “Since our article was published, we have received feedback from other parts of the world where monumental trees are dying.”

However, he is quick to note there’s still not enough proof to indict climate change outright. “Since there are relatively few millennial baobabs throughout southern Africa,” he says, “it is impossible to make a statistical analysis. Also there aren’t any climate records in some areas where the demises were recorded.”

It’s easy to understand the ecological value of the baobab tree. “These trees keep soil conditions humid and stymie soil erosion, which is very important in the dry savanna,” says Aida Cuni-Sanchez, a tropical forest ecologist at the University of York in the UK, who has previously studied climate change effects on baobab trees. “They also act as an important source of food, water, and shelter for a wide range of animals, including birds, monkeys, and even elephants, which eat their bark.”

But baobabs are also incredibly useful to humans. “These trees have more than 300 uses,” says Cuni-Sanchez. The seeds, leaves, and fruit are all edible, and can also be used for medicines, dyes, and rope materials. Humans have sometimes even turned the trees into makeshift homes and shops. The Sunland Baobab, located in the Limpopo Province of South Africa, had a gargantuan tree trunk circumference stretching out to 150 feet, with a cavern-like hollow center that was home to an entire cocktail bar before the collapse of several major stems in 2016 and 2017.

Ghislain Vieilledent, an ecologist at the CIRAD French research center who has previously studied tropical forest loss and baobab mortality on Madagascar, thinks the new findings show “concretely that something abnormal is happening regarding baobab tree mortality. Using an emblematic species, it alerts once again on the potential negative effects of climate change on tree species and forests in general. Other types of disturbances, like insect attacks, fires, or storms are less likely in this case.”

“Nonetheless,” he emphasizes, “it does not mean that the African baobab is threatened with extinction. Mature but younger and more vigorous individuals of the same species might not be as vulnerable to climate change as old individuals.”

More research is needed to properly figure out how grave the situation is and what conservationists ought to do, but if climate change really is to blame, the clock is ticking fast. “The baobabs are a natural wonder, like the Giant Sequoias or the Grand Canyon,” says Cuni-Sanchez. “It is a sad to think that the next generations won’t be able to admire them.”

Correction: A previous version of this article mentioned the diameter of a baobab’s “trunk” when the measurement in fact referred to the span of the tree’s canopy. This has been corrected.