When an internet-famous Steller’s sea eagle turned up roughly 11,000 kilometers from home in late 2021, birders flocked to catch a glimpse. 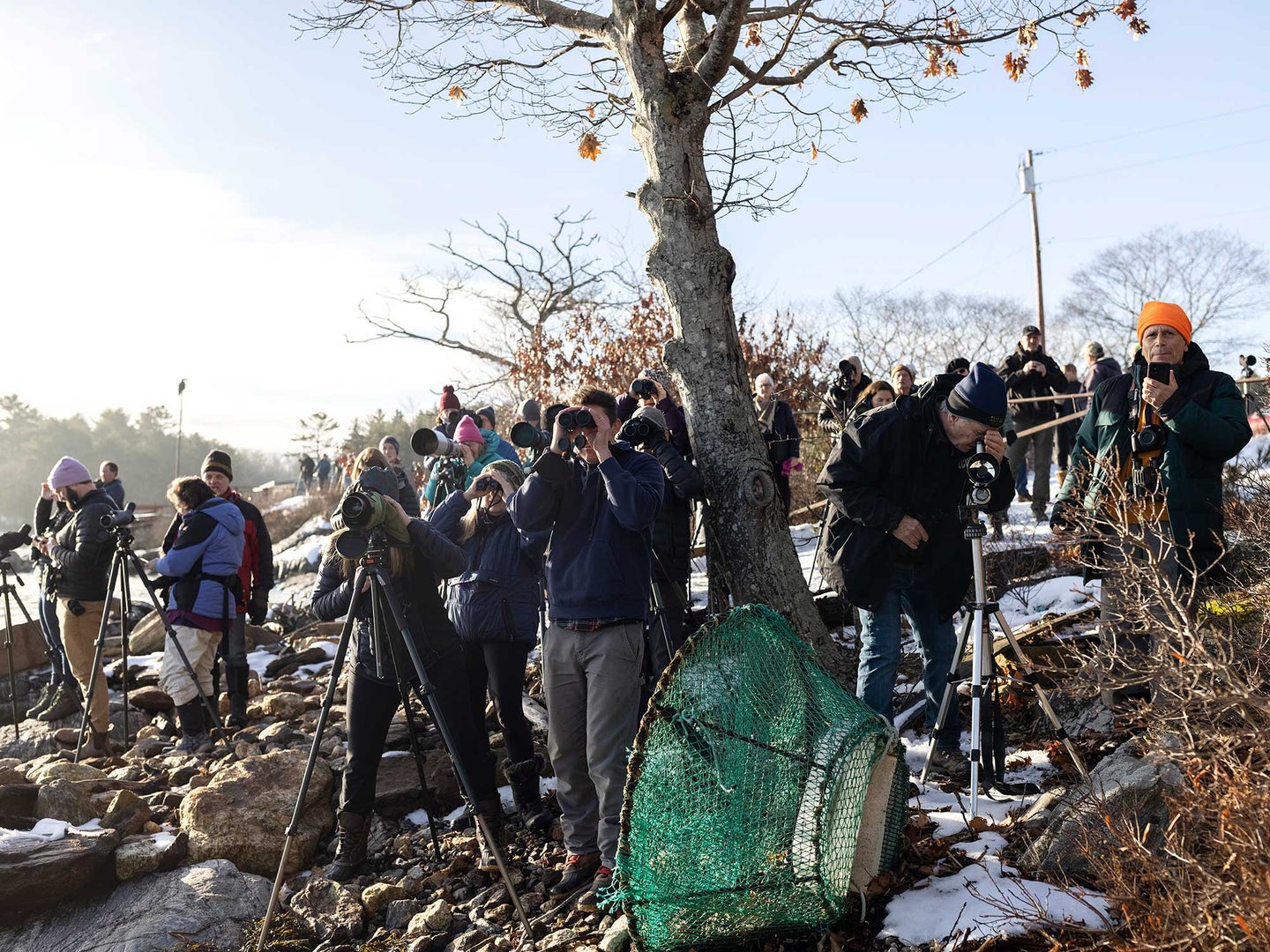 It was a frigid January morning when Liz Pusch, a biologist and avid birder, finally got to see Stella, the Steller’s sea eagle. Pusch had traveled all the way from Stone Mountain, Georgia, for her once-in-a-lifetime chance to glimpse the bird, and as she pulled over by the side of the road near Boothbay, Maine, where Stella had been sighted, she found she was one in a crowd. “There were at least 150 people,” says Pusch. “It was the craziest thing I’ve ever seen.”

Stella, who bears a bright-tangerine beak, striking white shoulders, and a wingspan the width of a king-sized bed, is a minor avian celebrity. The raptor is not only impressively large, it is rare and terribly lost. Steller’s sea eagles typically live around the Sea of Okhotsk and the Bering Sea, in China, Korea, Japan, and eastern Russia, where the declining population numbers 4,000-odd birds. Stella—whose sex is still unknown—was first spotted in Alaska in August 2020 before making its way to Texas in March 2021 and to eastern Canada later that year. Media caught wind of the surprising journey, and Facebook groups and a Twitter account popped up to track Stella sightings. By December 2021, the sea eagle had settled in Massachusetts and Maine, about 11,000 kilometers from home, and Pusch decided to make the trip to see the bird. In April 2022, several months after Pusch’s visit, Stella moved north to Nova Scotia and was most recently seen in Newfoundland.

Birds wandering out of their home range is a fairly common occurrence. Hurricanes and other extreme weather events may blow some birds off course, while other individuals could simply be born with a wonky GPS. Alternatively, some scientists think vagrant birds like Stella could be the pioneers of a species exploring new habitats. Regardless of why birds stray, vagrants can be a surprising source of revenue for local economies as birders flock for their chance to add an exclusive avian to their lifetime lists of birds. In research that is not yet published, Brent Pease, an ecologist at Southern Illinois University, estimated that more than 2,000 people traveled to Maine and Massachusetts to see Stella during the month the sea eagle was there, spending nearly US $500,000. “We’ve never seen such a buzz for a bird before,” he says.

To assess the sea eagle’s economic impact, Pease released a survey asking birders where they had come from, how much money they spent to see Stella, and whether they posted about their sighting online. Like Pusch, most people who came to see the bird traveled from outside their home zip codes, some from as far away as California or Washington State. Study participants spent $181 on average, though Pusch’s trip cost $1,500, including flights.

She says the expense was worth it. “I was super excited to get such a close, beautiful view. That was really amazing.”

Corey T. Callaghan, a biologist at the German Centre for Integrative Biodiversity Research in Germany, who studies vagrant birds, says that given Stella’s popularity, he’s not surprised the bird generated so much revenue.

Callaghan previously studied a lost black-backed oriole in Pennsylvania that generated $223,000 in just over two months and vagrant Aleutian terns in New South Wales, Australia, that generated a similar amount over four months.

Because vagrant birds pop up so unpredictably, Callaghan says it can be challenging to evaluate their economic impact, but placing a dollar value on wildlife can help politicians and policymakers make conservation decisions. When it comes to nature, he says, “these studies show quite clearly we value rarity.”

Beyond the initial rush of birders packing restaurants and accommodations, the draw of vagrant birds could turn avian enthusiasts into repeat visitors, with long-term economic benefits. Pease says the lost sea eagle drew tourists who may have never visited before.

Pusch, for one, was charmed by the location. “I would go back to that part of Maine just for vacation,” says Pusch. “I don’t know if I would’ve chosen that spot just off the top of my head if I hadn’t been there to see the bird.”