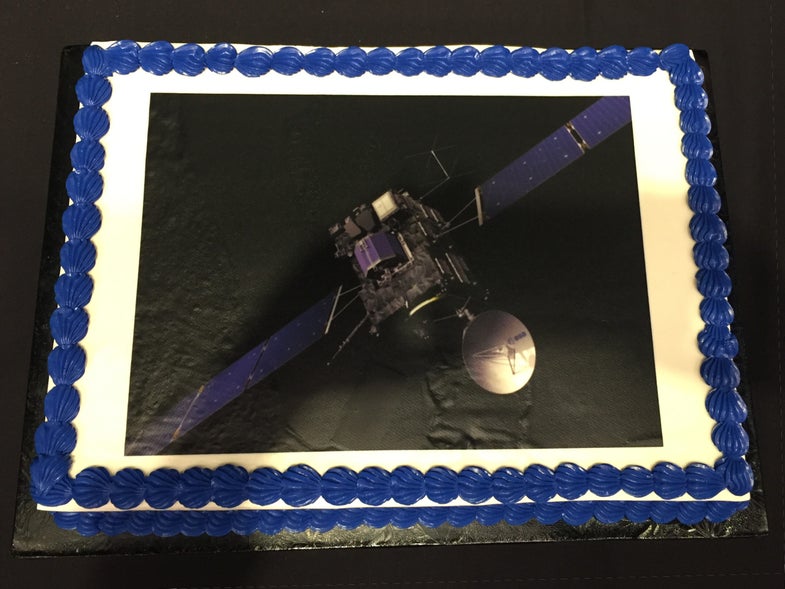 After traveling 4.9 billion miles, the first spacecraft to orbit a comet ended its mission today by softly “landing” onto Churyumov-Gerasimenko or 67/P. At 4:19 am Pacific time, the team here at Jet Propulsion Laboratory in California received confirmation that Rosetta had carried out its final command, to end its life by crashing into the surface of the comet.

“The whole process of landing was perfect,” says Project Scientist Bonnie Buratti. “We weren’t sure about the gravity field of the comet or the off-gassing, but it went flawlessly.”

Spectacular new photos that Rosetta took during its final descent show the comet in a new perspective, only achievable by crashing the craft into the surface. Buratti and JPL Project Manager Art Chmielewski are connected via Skype from Germany to walk the team at JPL through the new close-up images, which show small boulders and pebbles up close. “We got to take these images with unprecedented resolution,” says Chmielewski. “When the spacecraft went for its suicidal landing, we got confirmation that it’s there, and upon touching the surface, it disconnected itself.”

“These are the tiny little building blocks that made up the planet. We are answering the most fundamental questions of how we got here,” says Buratti.

It’s a bittersweet day. Many people here on the JPL Rosetta team have spent over a decade planning the mission and studying 67/P. The beginning and end of this mission mark a lifetime of planning, sequencing and scientific research for dozens of people around the world. The mission was first proposed back in the 1970s but wasn’t accepted by the European Space Agency until 1993. Rosetta launched in 2004, and finally entered orbit around the comet in 2014. It’s been conducting research for the last two years, providing scientists with a surplus of data.

It’s a sad day when we lose a spacecraft that’s delivered so much important science to researchers, but, here at JPL, there’s cake.