Ever since Japan’s asteroid exploring spacecraft Hyabusa crash-landed in the Australian outback this summer after a seven year round trip... 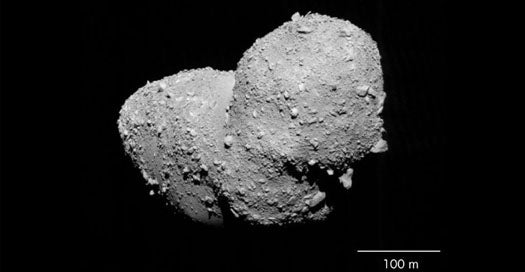 Ever since Japan’s asteroid exploring spacecraft Hyabusa crash-landed in the Australian outback this summer after a seven year round trip through space, astronomers and space geeks the world over have been waiting to hear confirmation from JAXA (the Japanese space agency) that the troubled mission did indeed bring back samples of asteroid dust. Today they got it. For the first time, scientists have collected dust from an extraterrestrial asteroid and returned it to Earth for study.

So far, JAXA scientists have collected about 1,500 particles of asteroid dust from Hayabusa’s sample return capsule, which was jettisoned to Earth before the larger Hayabusa craft incinerated upon re-entry. JAXA announced back in July that the sample capsule did indeed contain some dust, but at that point it was unclear whether those particles were actually from the asteroid Itokawa where Hayabusa landed in 2005 or contamination from Earth.

Using a scanning electron microscope, JAXA scientists found iron-rich olivine and pyroxene particles, most of which are less than 10 microns across, consistent with our understanding of the asteroid’s composition and ruling out the possibility they came from Earth. They also confirmed that Itokawa is an S-type asteroid – a sedimentary collection of rocks and rubble held together by gravity – another earth-based observation confirmed by Hayabusa.

The success of Hayabusa, which launched back in 2003, was very much up in the air. The first-of-its-kind mission to visit an asteroid, collect physical samples, and return them to Earth was beset by Murphy’s law. A fuel leak, communications issues, and propulsion malfunctions all struck at various points during the journey, adding three years to the trip. An attempt to drop a landing craft on Itokawa also failed, missing the asteroid completely. Mission handlers finally decided to land the Hayabusa craft itself on the asteroid in an attempt to scoop some asteroid dust into its sample capsule.

Miraculously, JAXA’s seat-of-the-pants mission handling worked. Proving not only that we can send spacecraft to extraterrestrial bodies far from Earth and bring them home again, but that in a pinch we have the technology to rendezvous with and land upon an asteroid. But practice makes perfect – JAXA is already working on Hayabusa 2, which aims to land a spacecraft on a carbon-rich asteroid in 2018.