Why DARPA Wants An Experimental Spaceplane

An ambitious DARPA project seeks to get satellites into space cheaper and on demand. 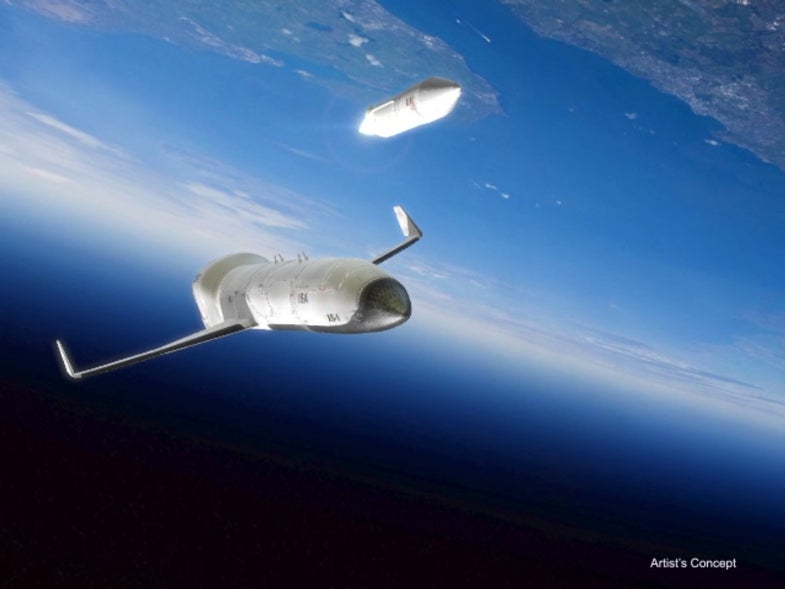 So DARPA wants a reusable spaceplane. I mean, who doesn’t? For decades, space experts have tried to design quick-turnover, reusable launch systems. So far, however, no one has made one that works. “There really isn’t any kind of vehicle today that does exactly what they’re asking people to do,” Micah Walter-Range, director of research and analysis at the Space Foundation, tells Popular Science. “You can certainly compare it to existing vehicles, but it seems to be a new class.”

Here’s how the dream goes: Our fictional rocket would blast off at hypersonic speeds. Once it reached the right altitude, it would release any upper stages (and payload) it might have. Then it would turn back toward the Earth and land gently someplace where engineers would be able to fetch it, polish it up, and stick it back on the launch pad. Theoretically, reusable rockets should cut the costs of launches enough to open up space to more groups, such as students and startups, and ease NASA’s financial burdens.

It’d be like having a jumbo jet for getting to space. Just load, unload, and repeat.

A few different groups have been working toward this goal recently. Last week, the U.S. Defense Advanced Research Projects Agency announced it awarded three teams contracts to make initial designs for just such a reusable small-satellite shuttle. One team is led by the Boeing Company, working with Blue Origin; Masten Space Systems, working with XCOR Aerospace, leads another; and Northrop Grumman Corporation, working with Virgin Galactic, make up the last. Meanwhile, SpaceX announced yesterday it completed a successful test on its way to making a reusable Falcon 9 rocket.

“There really isn’t any kind of vehicle today that does exactly what they’re asking people to do.”

DARPA calls its version of this project Experimental Spaceplane 1, or XS-1. What the agency wants for XS-1 is unique. The craft should launch 3,000-pound to 5,000-pound unmanned payloads to low-Earth orbit for less than $5 million per flight. The whole launch process needs to be streamlined, too: DARPA wants to see 10 flights in 10 days.

For one thing, humans have never made launch vehicles with reusable rockets. Reusable passenger spaceships, like the vehicles Virgin Galactic is developing, are supposed to reach suborbital altitudes, not low-Earth orbit. NASA’s Space Shuttles were reusable, but required days of refurbishing in between flights. Even among the one-time-use satellite launchers available today, none have quite the carrying capacity or price of Experimental Spaceplane 1. For example, Orbital Sciences’ Pegasus XL carries just 1,000 pounds and costs an estimated $30 million to $40 million for a low-Earth-orbit flight. SpaceX’s (current, non-reusable) Falcon 9 carries about 20,000 pounds, at a cost of $54 million per flight.

“This is a DARPA-hard kind of problem.”

In addition, a vehicle that could launch quickly could be helpful for military objectives. “Let’s say you’re planning a raid to find the next Osama bin Laden, something like that, and due to the timing of it, you don’t have a satellite in the right place,” Walter-Range says. “You have a small satellite on the ground and you just need to get it up tomorrow.”

Right now, you would need to schedule a flight like that years in advance. With the XS-1’s more frequent flying schedule, however, “you would just bump the next payload, put your satellite on there, and off you go,” Wilhite says.

So why has nobody been able to make an XS-1 before? Different experts cited different reasons. Wilhite, who headed the Vehicle Analysis Branch at NASA Langley in the 1980s, points to technologies, such as hypersonic vehicles, that didn’t previously exist. Getting an aircraft that’s just rocketed up to the edge of space to come back down again—Gently! No crashes that would render the rocket unusable—is another tough problem.

Mitchell Walker, also an aerospace engineer at Georgia Tech, thinks XS-1’s toughest hurdles would happen between its back-to-back flights. Once its reusable first stage reaches the ground, engineers would have make sure it’s good to go again within 24 hours. “Anybody can get the engine back,” Walker says. “The question is, can you convince yourself that it’s okay to put your next multi-million-dollar asset on top of it?”

Of course, the Space Shuttles carried astronauts, a load more precious than any multi-million-dollar NASA project. XS-1 would not only carry unmanned satellites, its 5,000-pound limit means those satellites would be small and likely not too expensive. No James Webb Space Telescopes here. So XS-1’s customers might be satisfied with fewer, shorter safety checks, if that meant cheaper, more frequent flights.

Engineering-wise, there are a lot of variables to balance in the XS-1. “It’s a really neat problem because it’s got a lot of dynamics. Where are you hauling? What are you hauling?” Walker says. “This is a DARPA-hard kind of problem.”