The Phoenix program is building a robot that can repurpose dead satellites into new ones in space. 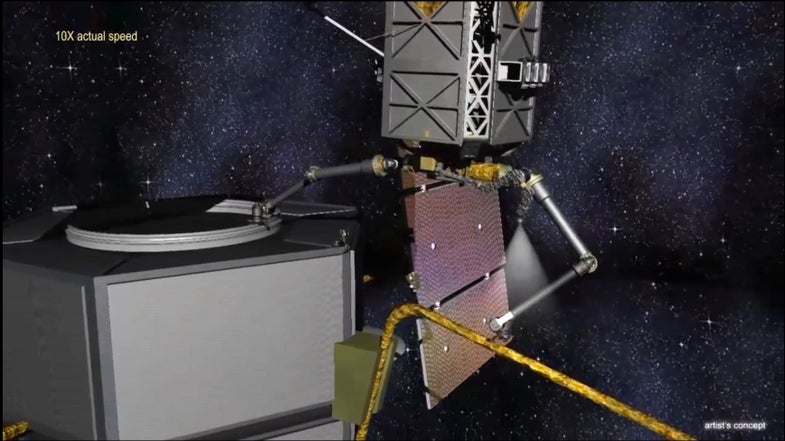 DARPA’s vision for scavenging and salvaging dead satellites in orbit continues its trudge toward technologic feasibility. DARPA launched its Phoenix initiative in summer of last year hoping to cobble together a robot capable of intercepting, dismantling, and rebuilding defunct satellites even as they whip through space some 22,000 miles above the Earth. It’s a tall order, requiring all kinds of capabilities that are less-than-fully mature, things like robotic autonomy/artificial intelligence, machine vision, and on-orbit satellite refueling. But if a new video released by DARPA is any indication, work on the Phoenix satellite scavenger is progressing.

That’s not to say a vehicle launch is in the immediate offing, but the video above–illustrated by an animation of how each technology piece would work within the larger concept–shows piece by piece how the project is moving forward. And there are a lot of pieces to consider.

Phoenix will need to be able to rendezvous in space with newly launched satellites, on which smaller “satlets” will hitch rides into orbit. Phoenix will then remove those satlets (without damaging whatever multimillion-dollar satellite they are riding on) and carry them to dead satellites in other orbits. It will then attach the new satlet–which carries the electronic brains of a new satellite–to the dead satellite’s antenna before severing the antenna from its now-defunct satellite body. The new satlet now has a perfectly good piece of legacy hardware it can use to communicate with ground stations or other satellites, and after placing it in the proper orbit the Phoenix vehicle can move on to its next salvage job.

None of that is going to be easy, but DARPA clearly isn’t deterred by the challenge. Another Proposer’s Day is slated for Feb. 8 in which the agency will ask for even more technologies related to the vehicles software, hardware, and satlet launch capabilities.