Wait, What? The Most Amazing Ideas From DARPA’s Tech Conference 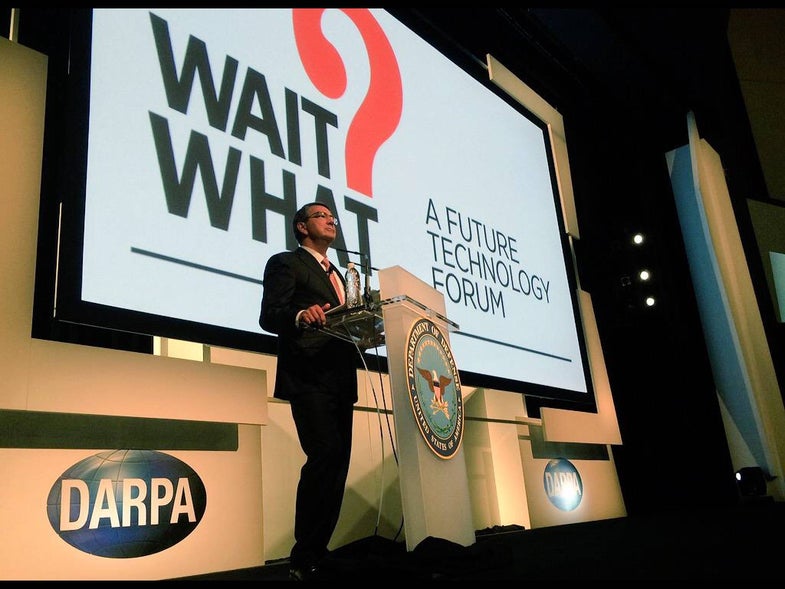 ST. LOUIS — The housecat-sized robot that brought me a granola bar may not have been exactly what Dwight Eisenhower had in mind when he founded the Defense Advanced Research Projects Agency. Rolling around on four skateboard wheels, the little delivery bot was a far cry from the first thing you imagine when you think about Pentagon technology.

But that little robot was more advanced than you might think. It used a sonic localization system to find the iPad that ordered the granola bar. Then it used sensors and navigation software to figure out how to cruise over to the iPad, without running into other delivery bots or human legs. After only a few seconds, it made its way across the convention center carpet and arrived at my feet, proffering a snack.

Imagine this robot instead carrying water to a wounded warrior, or a message to a command post under fire, and you recognize the appeal.

That title just about summed up the entire thing: As robots delivered your snacks, you could high-five a bionic arm while reading about brain-machine interfaces. You could take a selfie with BigDog, the terrifying four-legged robotic pack animal of the future, and pet his smaller counterpart, Spot. You could watch Hubo and other humanoid robots drill holes in plaster and climb through uneven terrain.

Later, you could listen to scientists talk about searching for aliens; dosing people with genetic material to give us disease immunity; measuring the fabric of spacetime with lasers; and debating the ethics of synthetic life.

“We’re here to change what’s possible,” said DARPA Director Arati Prabhakar, introducing the conference to assembled scientists, engineers and students. It was her idea to host the conference in St. Louis, with the goal of meeting people outside the Beltway and who don’t all work closely with DARPA.

The agency (originally ARPA, without Defense) was founded in response to the Sputnik launch, which caught pretty much everyone in the U.S. government by surprise in 1957. Eisenhower wanted the agency to ensure we wouldn’t be caught off guard again, Prabhakar said.

“We very quickly learned the best way to prevent that kind of surprise is to go create some surprises of our own,” she said. During the next five decades, DARPA projects led to the first stealth aircraft, the first precision-guided missiles and other military breakthroughs. Today, the agency helps the military deal with “a world of kaleidoscopic uncertainty,” Prabhakar added. “It’s this noxious stew of violent extremism, cross border criminal activity, and terrorism. All of that has to be managed.”

But the military’s blue-sky wing also has a firm hand in the civilian world, she noted. DARPA’s micro-scale inventions have also revolutionized semiconductors, artificial intelligence, and of course the Internet — it evolved from the ARPAnet, the first computer network, devised in 1969.

The 200-odd people who work in DARPA’s headquarters are tasked with coming up with similar things, the type of stuff our grandkids will take for granted but that we can’t even imagine. So that’s why DARPA program managers listened eagerly to discussions of how to search for intelligent aliens. And how to manage the ethical quandaries posed by creating synthetic life, or by interfering with the human genome. And how to fight biological threats, which Defense Secretary Ash Carter told PopSci is likely the future’s greatest challenge.

“There’s a lot of attention to tech, meaning in the sense of IT as the game-changing technology. I actually believe in the era to come, it will be the biosciences that will be most consequential for humankind,” he said. “Like all technologies, they will be used for good or for ill, and our job is to make sure that the uses for good outweigh the uses for ill. But I think if you had to pick a frontier, that is the one we would look back on — future secretaries of defense, future generations, and say, were we part of that awakening and part of that revolution? I hope the answer to that is yes.”

DARPA people work on some huge and strange programs, yet even they are surprised by some of the mind-blowing stuff their colleagues do each day. Brad Tousley directs DARPA’s Tactical Technology Office, which comes up with stuff like BigDog, the explosives program known as MAHEM (Magneto Hydrodynamic Explosive Munition), and Phoenix, a project that aims to send robotic arms to geosynchronous orbit to work in space garages 36,000 kilometers up. He was enthralled by a talk from Justin Sanchez, program manager of the Biological Technologies Office, who works on neural interfaces and other brain matters.

“We’re at the infancy of understanding the brain. If we can understand how the brain works, maybe it changes how you educate people,” Tousley said. “We know more about the cosmos than we do about the three pounds between our ears.”

Mark Gustafson, a program manager in the Tactical Technology Office who worked on the F-35 Joint Strike Fighter’s propulsion system, said he was impressed by a talk about light and time. Jun Ye, a physicist at the National Institute of Standards and Technology, explained how ultra-sensitive lasers can measure the very nature of time, and can be used to gauge the distance between the Earth and the moon, which is constantly changing. The lasers can detect differences in that distance down to the size of a bacterium.

What is the point of something so precise? As Ye put it, people like NASA would like to measure the distance to their priceless satellites, so that’s something. But maybe the larger point is just … because. Because there are things to be known, and some of them are known unknowns, and others are unknown unknowns (as a different defense secretary once put it). DARPA is tasked with making them all knowns.

Carter said he still worries about losing the nation’s military edge, and that the people of DARPA are crucial for preventing that.

“I think anybody who is technologically aware in defense has to be concerned. My predecessors generations back were concerned, too. It’s part of the requirement for those whose mission it is to protect people to stay ahead of those who would threaten people,” he told reporters. “Since the march of technology carries even the evil and nefarious forward, we need to stay well out in front of anybody who could harm our people.”

Carter served in the Pentagon in the 1990s, too, and noted that much has changed since his prior tenure. Today, the companies making our military technology are also doing it for others across the globe, and almost everyone has access to the ideas and technology that we do. That means the U.S. needs its own special toolkit, he said.

“You can’t just do your own thing, in your own box, and know you’re going to be best by doing that. You have to be out there with the wider world of technology,” he said. “That’s why DARPA is so important and why this conference is so important.”