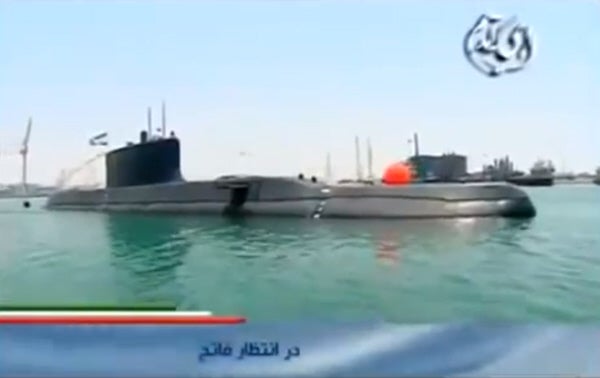 During a montage of military achievements broadcast February 3rd on Iranian television, something new slipped in with tributes to the past and present. It was the first footage of Fateh, an Iranian submarine so new it hasn’t officially launched yet.

While the Fateh hasn’t officially been unveiled, the world has known about its existence since at least October 2013, thanks to satellite images. The Fateh is, at approximately 130 feet long and 20 feet wide and 500 tons displacement when submerged, Iran’s biggest native-built submarine so far. (Iran has three larger submarines, the Russian-built Kilo-class subs.)

Fateh is Iran’s third native-built submarine design. The first is the Ghadir-class midget sub, which as the name suggests is not a terribly fearsome weapon of war. The Ghadirs are based on a North Korean design, displace about 123 tons, and estimates range that there are between 10 and 19 in Iranian service. According to Michael Connell, director of the Iranian Proogram at the Center for Naval Analysis, In 2007, Iran launched a demonstrator submarine called the Nahang, which is still in service. The Fateh is larger than both of these, which means it can carry more torpedoes or underwater mines, and can venture further away from coastal waters and home ports, making it deadlier and more useful for the Iranian navy.

Michael Connell, director of the Iranian Program at the Center for Naval Analysis, explained the functional difference between the Iranian submarines to Popular Science:

Watch the footage of the Fateh submarine below: