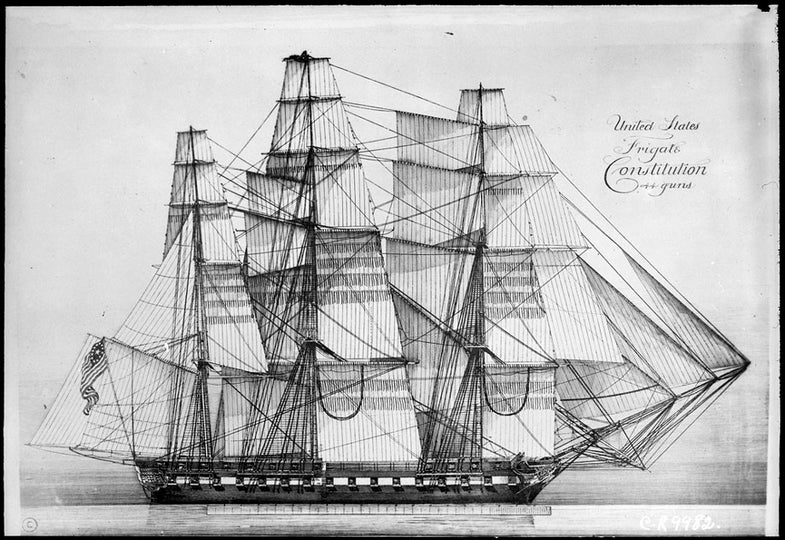 On the afternoon of August 19, 1812, about 400 miles southeast of Halifax, Nova Scotia, the USS Constitution knocked the masts off the British warship HMS Guerriere. The battle earned the U.S. ship the nickname “Old Ironsides,” in no small part due to the density of American oak, which repelled cannon shots better than the less-dense oak from Europe. Today the USS Constitution, with 215 years of service, is the longest-serving warship in the U.S. Navy.

Pictured above is the original sail plan for the USS Constitution from 1797. Pretty majestic, right?

Back in the 1790s, the U.S. faced an uncertain world of revolutions, rising superpowers, and piracy off the coasts of Africa. The Naval Act of 1794 created the first U.S. Navy ships since the Revolutionary War, including the USS Constitution.

Two very important and competing threats influenced the construction of the USS Constitution. The first was pirate attacks against American merchant ships in the Mediterranean. To outgun these pirates, the ship carried 44 heavy cannons.

The second challenge was the threat of the more-established European navies, which maintained much larger warships than those of the U.S. Called “ships of the line,” they were massive, heavily armed, and held hundreds of crewmen and marines. The USS Constitution was built to outgun any ship the same size or smaller, and at the same time to sail faster than any bigger ship.

Crucial to those goals was a narrow body and a lot of sails: 42,710 square feet of sail on three masts, to be exact.

Today, the USS Constitution is both a commissioned naval vessel and a living museum in Boston Harbor.

_GlobalFlyer might go nonstop around the world, a feat Voyager accomplished in 1986. But that’s where the similarities end. With new aerodynamics, materials and design, Burt Rutan’s new craft is significantly more sophisticated than the old record breaker. Aerodynamics: The GlobalFlyer team is using advanced computer technology–specifically, computational fluid dynamics–to vastly reduce the airplane’s drag and optimize the structure for long-range, exceptionally high-fuel-load flying. Materials: The thousands of pounds of fuel in Voyager’s four-section wings made them droop down to the runway, where they scraped against the ground during takeoff. In order to avoid the same problem, GlobalFlyer’s wings are constructed of a single 100-foot-long piece of reinforced composite. Design: Without horizontal tails to stabilize it, Voyager flexed and twisted in ways that made it hard to control. GlobalFlyer has complete tail assemblies, which dampen unwanted up-and-down movement._

Sixteen fuel tanks inside the plane’s wings feed fuel into the header tank beneath the engine. The tanks require constant monitoring to maintain the plane’s balance in flight.

The carbon-fiber seat can be upright or reclined. For takeoff and landing, the pilot sits on cushions to see out the canopy; he’ll use instruments to navigate at other times.

_Stretching structural integrity and aerodynamic performance to new limits, GlobalFlyer Looks for the long way home. Wing shape
The sailplane-like airfoil design of the 114-foot-long, 400-square-foot wings gives the GlobalFlyer outstanding glide performance. Boom and tail
Each 40-foot-long boom holds landing gear and 5,454 pounds of fuel. Designers streamlined the tail assembly, because too much weight so far behind the plane’s center of gravity would create instability. Jet engine
The Williams FJ44-3 business-jet engine is modified to use military-grade JP-4 fuel, which has a lower freezing point than normal jet fuel. Drogue Chutes
Undetachable chutes that add 20 square feet of equivalent drag can initiate a final descent or stabilize the aircraft in an emergency. Main fuselage
The center fuselage holds the header fuel tank, cockpit, engine mount and landing gear. Unlike Voyager, which flew at 11,000 feet, GlobalFlyer cruises at 45,000 feet and so requires a pressurized cabin._ 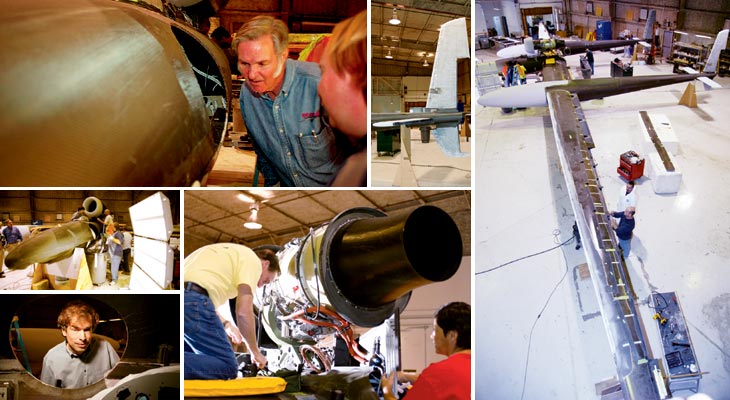 Clockwise from above: Burt Rutan inspects the GlobalFlyer cockpit. Tail assemblies will dampen movement better than Voyager’s (1986). Engineers prepare wings for aileron attachment. The engine’s exhaust nozzle is made entirely from carbon-fiber composite–a particular challenge given the high temperatures. Project engineer Jon Karkow framed by the cockpit entry, which will be filled with a pressure-sealed plug-style door. Other engineers affix epoxy-soaked strips of carbon-fiber fabric inside the fuselage.
Kelsey D. Atherton