Light Graffiti Made With The Wave Of A Magic Wand

Get your tickets to this light show. 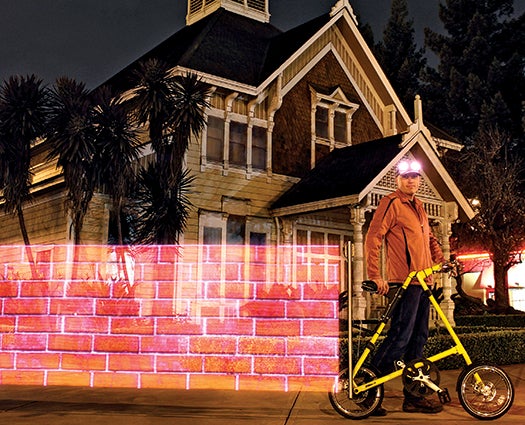 A computer-controlled strip of LEDs attached to Phillip Burgess's bike created this eerie brick wall as he rode by. Justin Ellis
SHARE

After bright lights fade in the dark, our eyes can still see them as streaks, smears, and dots. Engineer Phillip Burgess drew inspiration from this “bug” of human vision to build the NeoPixel Painter: a meter-long strip of multicolor LEDs controlled by a palm-size computer. When swept across a camera’s view during a long exposure, the device rapidly blinks out an image, one column of pixels at a time, to create art in midair. So far Burgess has painted twisted rainbows, flying dragons, a map of Earth, and other complex digital graffiti using a customized bicycle.

Download a PDF of instructions to build the NeoPixel Painter here.