An Oregon startup has developed a pocket-size device that uses tiny sponges to stop bleeding fast. 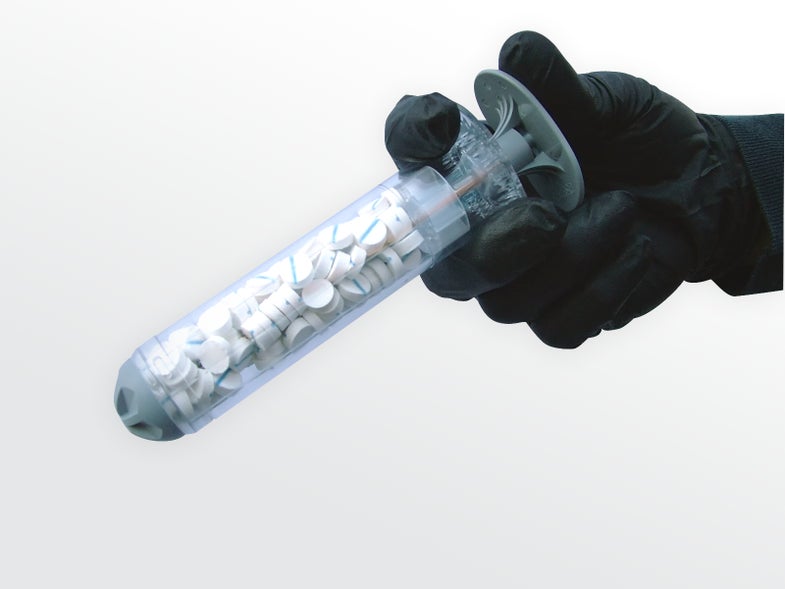 When a soldier is shot on the battlefield, the emergency treatment can seem as brutal as the injury itself. A medic must pack gauze directly into the wound cavity, sometimes as deep as 5 inches into the body, to stop bleeding from an artery. It’s an agonizing process that doesn’t always work–if bleeding hasn’t stopped after three minutes of applying direct pressure, the medic must pull out all the gauze and start over again. It’s so painful, “you take the guy’s gun away first,” says former U.S. Army Special Operations medic John Steinbaugh.

Even with this emergency treatment, many soldiers still bleed to death; hemorrhage is a leading cause of death on the battlefield. “Gauze bandages just don’t work for anything serious,” says Steinbaugh, who tended to injured soldiers during more than a dozen deployments to Iraq and Afghanistan. When Steinbaugh retired in April 2012 after a head injury, he joined an Oregon-based startup called RevMedx, a small group of veterans, scientists, and engineers who were working on a better way to stop bleeding.

XStat, before and after

RevMedx recently asked the FDA to approve a pocket-size invention: a modified syringe that injects specially coated sponges into wounds. Called XStat, the device could boost survival and spare injured soldiers from additional pain by plugging wounds faster and more efficiently than gauze.

The team’s early efforts were inspired by Fix-a-Flat foam for repairing tires. “That’s what we pictured as the perfect solution: something you could spray in, it would expand, and bleeding stops,” says Steinbaugh. “But we found that blood pressure is so high, blood would wash the foam right out.”

So the team tried a new idea: sponges. They bought some ordinary sponges from a hardware store and cut them into 1-centimeter circles, a size and shape they chose on a whim but later would discover were ideal for filling wounds. Then, they injected the bits of sponge into an animal injury. “The bleeding stopped,” says Steinbaugh. “Our eyes lit up. We knew we were onto something.” After seeing early prototypes, the U.S. Army gave the team $5 million to develop a finished product.

But kitchen sponges aren’t exactly safe to inject into the body. The final material would need to be sterile, biocompatible, and fast-expanding. The team settled on a sponge made from wood pulp and coated with chitosan, a blood-clotting, antimicrobial substance that comes from shrimp shells. To ensure that no sponges would be left inside the body accidentally, they added X-shaped markers that make each sponge visible on an x-ray image.

“By the time you put a bandage over the wound, the bleeding has already stopped.”

The sponges work fast: In just 15 seconds, they expand to fill the entire wound cavity, creating enough pressure to stop heavy bleeding. And because the sponges cling to moist surfaces, they aren’t pushed back out of the body by gushing blood. “By the time you even put a bandage over the wound, the bleeding has already stopped,” Steinbaugh says.

Getting the sponges into a wound, however, proved to be tricky. On the battlefield, medics must carry all their gear with them, along with heavy body armor. RevMedx needed a lightweight, compact way to get the sponges deep into an injury. The team worked with Portland-based design firm Ziba to create a 30 millimeter-diameter, polycarbonate syringe that stores with the handle inside to save space. To use the applicator, a medic pulls out the handle, inserts the cylinder into the wound, and then pushes the plunger back down to inject the sponges as close to the artery as possible. 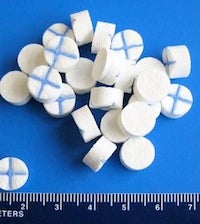 Three single-use XStat applicators would replace five bulky rolls of gauze in a medic’s kit. RevMedx also designed a smaller version of the applicator, with a diameter of 12 millimeters, for narrower injuries. Each XStat will likely cost about $100, Steinbaugh says, but the price may go down as RevMedx boosts manufacturing.

If the FDA approves XStat, it will be the first battlefield dressing created specifically for deep, narrow wounds. Gauze, the standard treatment for gunshot and shrapnel injuries, is only approved by the FDA for external use, but “everyone knows that if you get shot, you have to pack gauze into the wound,” says Steinbaugh. When RevMedx submitted its application to the FDA, the U.S. Army attached a cover letter requesting expedited approval. According to Steinbaugh, RevMedx and the military are now in final discussions with the FDA.

Last summer, RevMedx and Oregon Health and Science University won a seed grant, sponsored by The Bill & Melinda Gates Foundation, to develop a version of XStat to stop postpartum bleeding. In the future, RevMedx hopes to create biodegradable sponges that don’t have to be removed from the body. To cover large injuries, like those caused by land mines, the team is working on an expanding gauze made of the same material as XStat sponges.

“I spent the whole war on terror in the Middle East, so I know what a medic needs when someone has been shot, ” Steinbaugh says. “I’ve treated lots of guys who would have benefitted from this product. That’s what drives me.”