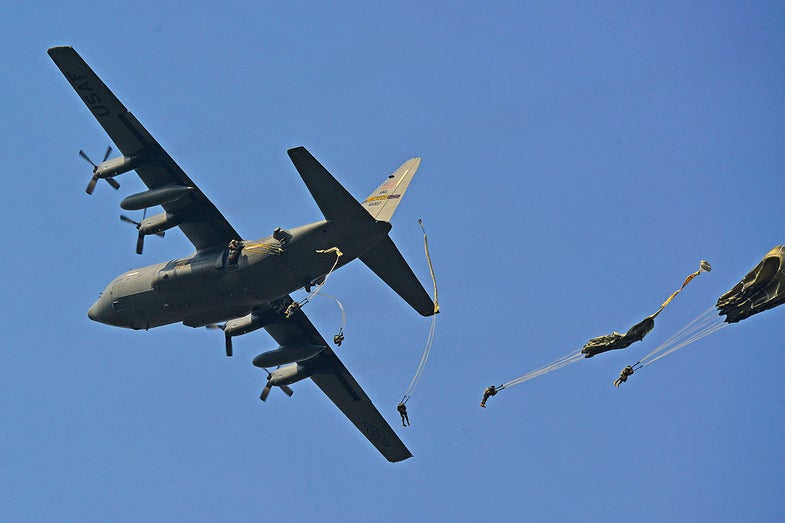 Every parachute is a promise between humanity and the laws of physics. Make the parachute right, and the falling object glides gently to Earth, cloth and rope gently guiding a path down from the sky to the ground. Mess up, and gravity will punish that failure, sometimes to the tune of $200,000, as is the case with these U.S. Army Humvees, which crashed to the ground over Germany during a training mission last week in Hohenfels, Germany.

Captured on video, three of the humvees during the drop straight to the ground, their flawed parachutes trailing behind them. A spokesman for the Army’s 173rd Airborne told Stripes that no one was injured as a result of the mishap.

Most of the time, parachutes work, and when they don’t, it’s almost always user error. And they’ve been perfected over a century of military use, so the challenge is usually not “bringing things to ground safely,” but “landing them exactly where intended“.

Parachutes aren’t the only way down: on Mars, where the atmosphere is too thin to use parachutes, vehicles land with airbags and rockets slowing their descent. For vehicles on earth, despite some attempts at winged tanks in the 1930s, parachutes remain the most cost-effective way to fall from an airplane and land on the ground intact.

Which is why it’s all the more remarkable when they fail. Watch the video, complete with adult language and cackling laughter, below: