A new three-finger "extensor" will help divers manipulate objects as easily in water as in air. Just like a Teenage Mutant Ninja Turtle. A new remote-controlled robotic hand will allow deep-sea divers to handle and feel objects underwater almost as easily as they can in air. This could transform deep-water operations, from marine biology to pipeline repair.

Atmospheric Dive Suits (ADS) are required for dives below three hundred feet. The ADS is a human-shaped hard shell enclosing diver so they can breathe air at normal pressure. ADS have become more sophisticated in some ways over the last century, but they still have primitive lobster-like claws called prehensors rather than hands.

The tremendous pressure at great depths makes gloves impractical, but prehensors are clumsy and awkward. One operator compares them to using chopsticks. Considerable practice is needed to achieve any expertise, and even then, there is only one possible movement or ‘degree of freedom,’ opening or closing the claw. The lack of contact makes it hard to pick up irregularly-shaped objects, and prehensors cannot hold ordinary tools like drills and hammers. Everything is a lot of work, and some jobs are impossible.

Until now. Vishwa Robotics of Cambridge, Mass., has developed a human-like deep-sea robotic hand called the Vishwa Extensor for the US Navy. CEO Bhargav Gajjar says the Extensor so called because it extends human manipulation in extreme environments. Unlike prehensors, it is highly intuitive to use, operated by a glove-like controller with force-feedback so the user can grip as firmly as needed.

“Hydrostatic pressure is the devil of it all.”

Gajjar points out that the Extensor is not an Iron Man-type exoskeleton, because it is remote from the operator’s hand; nor is it a prosthetic, though it has something in common with both. It is a dextrous, remotely operated robotic hand. The Extensor resembles a human hand on the outside, although inside is a complex arrangement of actuators and robotic mechanisms adapted to the pressures of the deep.

“Hydrostatic pressure is the devil of it all. It crumples every single surface,” says Gajjar. “How to get around it and still have a working human-shaped grasper is one of the main challenges.”

The Extensor currently has two fingers and a thumb. Gajjar the last three fingers on humans hands tend to move together, and extra fingers do little to improve performance. The fingers themselves are far more flexible than prehensors, each finger and thumb having four degrees of freedom, aided by three degrees in the wrist, providing the dexterity to grasp and operate hand tools.

The operator can a use a wrench or pick up a nut and attach it to a bolt, fiendishly difficult with prehensors. Challenging tasks, such as working the hatch on a submarine during an underwater rescue, become straightforward. The Extensor can even work the trigger on a drill or other powered device, impossible with a prehensor due to its lack of multiple fingers and opposing thumb.

As well as fitting them to diving suits, the Navy plans to attach giant pairs of robotic arms and Vishwa Extensors to unmanned submarines to reach even greater depths. The operator stays on board ship, touching and manipulating objects deep underwater via a video and haptic (touch) link. This will aid Navy missions such as mine clearance, crash retrievals and salvage.

The Vishwa Extensor will get its first underwater tests in a test tank at Vishwa Robotics over the next few months, preparatory to deep water testing. Latest tests are planned in the deep ocean simulation chambers of the Navy’s Experimental Diving Unit.

The technology will be benefit commercial divers involved in construction, inspection and salvage. Adding Vishwa Extensors to existing ADS will make routine jobs like underwater welding or operating chipping hammers quicker and safer. In marine archaeology and biology, the delicate handling of the Vishwa Extensor is a big step forward. At the moment it is impossible to pick up fragile sea creatures from the ocean floor.

Gajjar says that the underlying technology could prove equally valuable out of the water. Any detailed work on the ISS requires astronauts to undertake laborious and potentially risky EVA (Extra Vehicular Activity); a remote-controlled spacesuit could be ready quicker and work longer. Disaster disputations involving radiation or chemical spills could also benefit from the effective remote handling. But the hands will debut underwater.

“The problem of teleoperation in the Last Frontier is finally solved,” says Gajjar. “Swimming human avatars, underwater vehicles with human-like fingers and the tactility of the human hands, will finally reach the extreme depths of our planet and make amazing discoveries.” 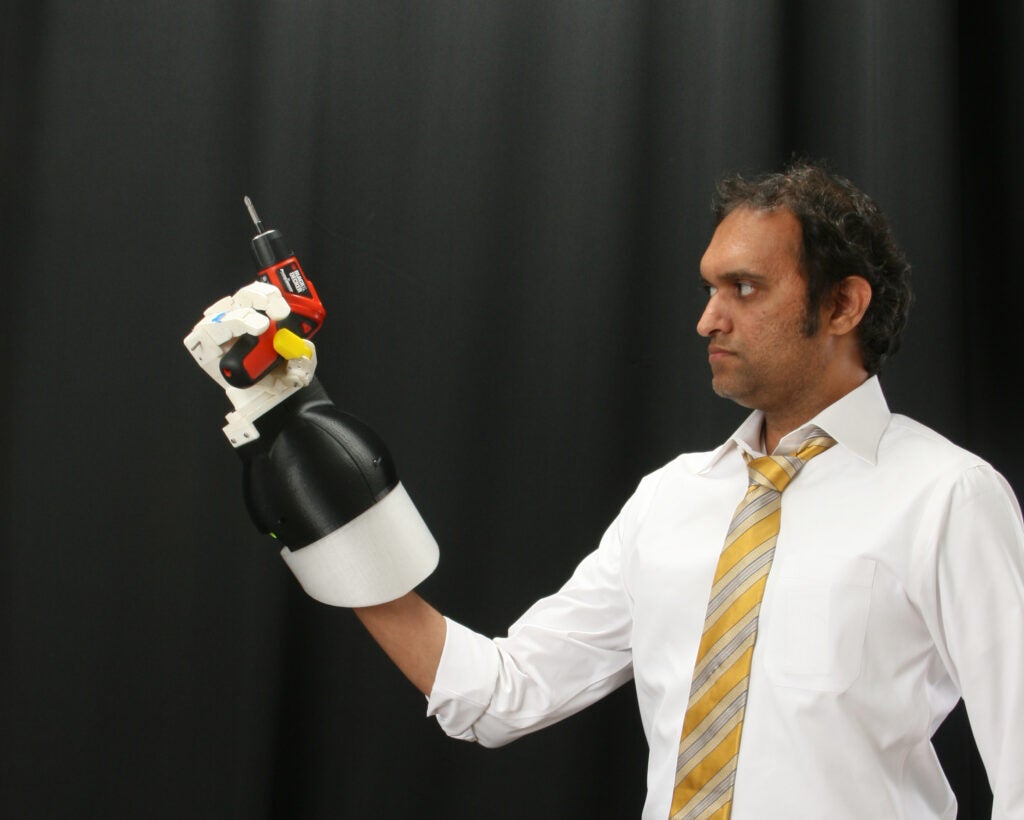