Police Will Throw This Camera Ball Into Rooms 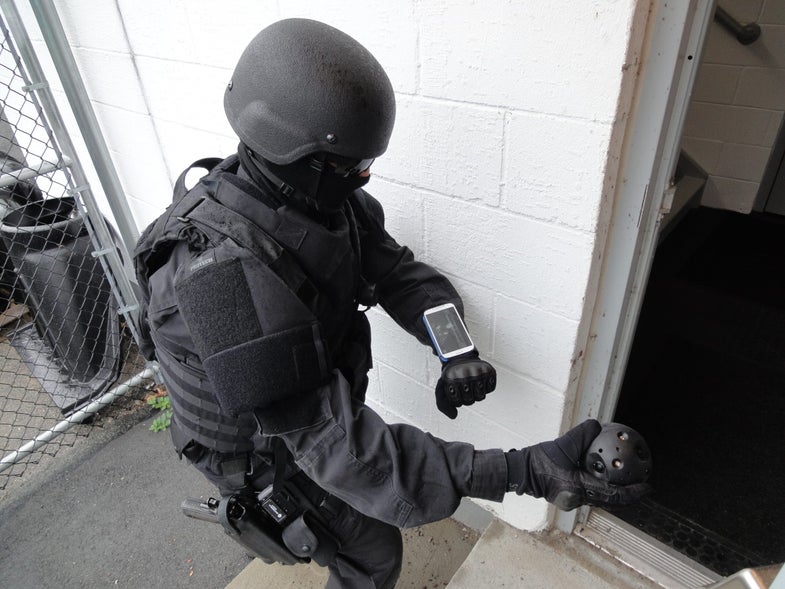 “Camera in the hole!” police officers soon shout, as they toss the new Explorer camera orb into a dangerous room before entering. Made by MIT alumnus at Bounce Imaging, the Explorer is a small, grenade-sized sphere full of cameras that first responders can throw into a space ahead of them, and when remotely activated, it assembles a panoramic image of what’s inside said space. Now, there are plans to get 100 Explorers into police departments. See them in action below:

We gave the Explorer and Invention Award in 2013. The rubber-coated ball has a camera inside with six lenses, to capture the scene inside a room, and it can transmit those photos remotely to a tablet or smartphone (Bounce Imaging’s website says it works with both Android and iOS). The basic version sells for about $1,500 and uses white LEDs lights to illuminate the room it’s thrown into. A “tactical” version, aimed at police, uses near-infrared LEDs instead, and goes for just shy of $2,500. Both versions can be attached to a $20 pole, and they create a 360 degree panorama every second for the full 30 minutes of run-time.

The Explorer isn’t the first thrown scouting robot. The aptly named “throwbot” is also grenade sized, can be hand tossed, and even features wheels and a remote control to drive it around. Throwbot is aimed at a military customer, and has a microphone so that troops can listen to the people inside a room as they freak out about a tiny rolling robot.

Unlike the Throwbot, Explorer doesn’t move on its own power, which tailors it for different purposes. Rescue workers could drop Ex[;prers into nooks and crannies that are otherwise inaccessible for larger tools but perfectly fine at accommodating a rolling ball, its lights and camera finding stuck people. And for police work, it provides a nice alternative to flash-bang grenades, letting the officers know what is inside the room without any accidental burning of toddler faces.