The Helmet That Could Change Football

It's flexible, but it can really take a beating. 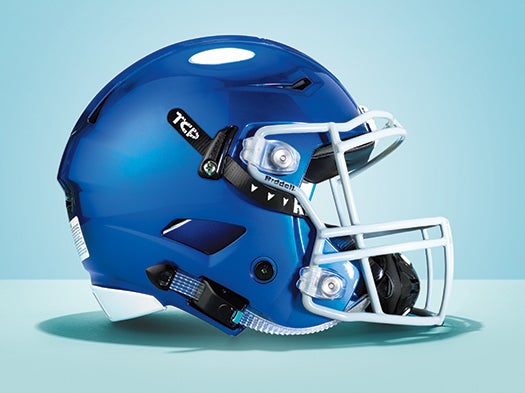 This gamechanger can take a beating. Photograph by Brian Klutch
SHARE

For decades, football players have worn rigid, unyielding helmets that protected the skull but did little to prevent concussions. To address this shortcoming, Riddell built a smarter helmet. Available to NFL and college teams, and soon youth and high school players, the new SpeedFlex is designed to diminish the impact forces of a hard hit. It will also alert coaches on the sideline if a blow was powerful enough to potentially cause a head injury. At a time when the sport has been hammered with bad news, this might be a game changer.

At the crown of the helmet, a flexible panel that has a polycarbonate shell attaches with a living hinge. It is padded with polyurethane and synthetic rubber and can depress up to a quarter of an inch, dispersing the force of an impact.

Most face masks attach to the helmet at a player’s brow, but SpeedFlex’s attaches at the sides. The configuration diffuses any force around the helmet, away from one central area. The stainless-steel mask is also designed to flex.

If a high school player loses his helmet, rules require him to sit out a play. Riddell’s ratchet-lock will make such incidents almost impossible. Unlike buckles or snaps, its guided tooth mechanism works more like snowboard bindings.

Sensors in the helmet collect data on impact force, linear or rotational acceleration, and location. If the hit put the player at risk of a concussion, the information is sent to a handheld device that alerts the trainer on the sidelines.