How plagues help scientists puzzle out the past 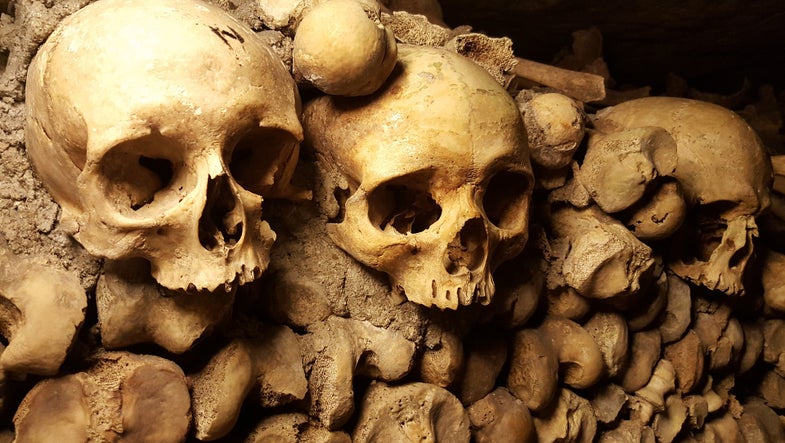 The following is adapted from Built on Bones by Brenna Hassett

Like many bioarchaeologists, I have a fondness for plagues. They upend the natural order of things, cutting across the normal risk factors for ending up in archaeological samples and giving a snapshot, captured in death, of not just the old and the infirm but also a sample of the whole (unlucky) population. The tragedy of mass causalities exposes lives that would, statistically, rarely be unearthed, including the adolescents and adults who form the bulk of a living population, so rarely represented in a cemetery. Calamities such as plague that knock everyone into the grave with one indiscriminate sweep are one of the few chances bioarchaeologists have to overcome something known as the Osteological Paradox, a term coined by researcher James Wood and colleagues to cover the very awkward point that, in studying past lives, the evidence bioarchaeologists actually have to go on are past deaths. Without access to modern medical care, the greatest potential for mortality comes in old age and in infancy and early childhood. Death is less of a risk for adolescents and reproductive-age adults, until something comes along to level those odds.

A giant, sweeping epidemic disease that carries away huge swaths of population, respecting neither rank nor righteousness, the phenomenon of plague holds a particular cultural fascination. The death’s heads and dancing skeletons of fourteenth-century European art reflect the macabre upending of order in the European world in the wake of the Black Death, with death itself brought front and centre in the narrative of European civilization. Indeed, the after-effects of the incredible loss of life seen during the Black Death had far-reaching consequences, whose scope and scale researchers are only now beginning to unravel.1 The Black Death didn’t just fell kings; it felled kingship and the entire medieval way of life in the parts of Europe that it devastated. Increasingly, scholars are seeing the influence of plague in other areas as well—lesser-known consequences of the catastrophic mortality that rippled out from epicenters in Asia and Africa. But why should any one particular disease have such a virulent effect? What circumstances conspired to kill uncounted millions on three continents? What, exactly, is plague, and how did we get it?

Plague is not one disease, even though most people’s first association might be the bubonic plague caused by Yersinia pestis, popularly known as the Black Death. Plague can be any disease2 that strikes enough people with sufficient virulence to kill in large numbers. Your definition of ‘large’ might understandably vary depending on whether those numbers are made up of your friends and family, but it’s another one of those things where you would know it if you saw it. Epidemic diseases require large numbers in order to succeed in the way the Black Death did. It does the bacteria or virus no good if the host organism keels over all alone in an isolated field without transferring the infection first. Some infections have a sufficiently long incubation period, or can hang about for long enough in nearby animals, that they can bridge the gaps between little clusters of people, forming a chain of infection that can rapidly spread across the landscape. The two requisite conditions for a local epidemic disease to become a pandemic are then very much the conditions bred in cities: dense populations, and well-worn roads between them. What we still don’t perfectly understand, however, is why some infections make that jump–infectious disease is nothing new, so why does it sometimes take us so much by surprise?

The real contribution of the invention of the city to the epidemiological transition is the shift from infection to epidemic. Infections are a nuisance, maybe even fatal; epidemics will kill you and leave no one left to bury the body. You cannot have an epidemic without a large, vulnerable population to infect: that’s what makes it an urban disease. It’s not that the diseases that cause epidemics don’t strike outside cities—most of our modern epidemic diseases are actually rural infections direct from the rustic goodness of the soil. They would stay there, too, but in a networked world of roads, buses, cars and people, they now reach the dense urban populations they need to explode. It’s the ready transmission of infection that makes a disease into a plague; the networks of roads, trade and the people who link an increasingly urban world. It’s the susceptibilities of unequal city lives, however, that allow plagues to flourish.

It’s possible to break the infectious diseases that kill humans down into different categories; these might be dependent on transmission vector (what you get it from), disease agent (bacteria or virus) or even climate and geography (it’s difficult to get malaria if malarial mosquitoes aren’t around). People (lots of people) offer a great opportunity for a disease on the make to become a full-fledged plague. What makes a plague? Dead people–and lots of them–in unusual places. As we go wandering back in time, there are few candidates to fit this description: the disease we know as Plague-with-a-capital-P, and the plague that came before it, smallpox.

Smallpox manages to be both the oldest archaeologically known epidemic and by far the deadliest recent epidemic. It is caused by infection with one of two species of virus, Variola major or Variola minor. The latter causes alastrim, a relatively benign form of dermatological disease which is rarely fatal and is endemic to parts of Central America. The former has killed by some estimates 500 million people, and leaves a disfiguring rash in many of those who were lucky enough to survive; this is the disease we are interested in. Smallpox is a disease that acts first on the skin: there are spots, then there are fluid-filled blisters. These blisters are what cause the horrific scarring associated with smallpox.3 Subsequently, the infection can progress even into bones, causing osteomyelitis, though this occurs only in a very small percentage of cases.4

Osteomyelitis is a very broad category of pathology; the term is used to describe any infection of the bone itself. It is the one sign accessible to bioarchaeologists who work on bone of potential smallpox infections. When bone is infected, it has an inflammatory response just like other tissues of the body, met in turn by a repair response that results in characteristic changes to bone shape. The infection may simply be evident as reactive bony changes on the interior or exterior surfaces of the bone. It can form an abscess, a pus-filled lesion, which may force the formation of a channel all the way out through the bone, along which said pus can suppurate. The clinical term for this channel is ‘cloaca’, which is Latin for ‘sewer’ and every bit as disgusting as you might imagine a Roman sewer to be. New bone formation on the surface in response to the infection can change the width or thickness of the bone, so when compared to an opposite number, say from the other side of the body, the shape is very much changed.

Of course, the majority of cases of osteomyelitis are not caused by smallpox but by a host of bloodstream-borne infections, with about 90 per cent of modern infections caused by the bacterium Staphylococcus aureus.

Despite smallpox only rarely leaving telltale signs of bony infection, bioarchaeology has another avenue for detecting the disease in antiquity: mummies. In 1979 physician Donald Hopkins was granted special permission to examine the upper half of the unwrapped body of the Egyptian pharaoh Ramses V, who died in 1143 BC5. The mummy’s skin showed evidence of a pustular rash, very akin to smallpox, and subsequently Ramses V became famous not for a perfectly sensible large-scale tax survey he carried out in his limited reign, but for being the first archaeological evidence of smallpox.

Excerpted from Built on Bones: 15,000 Years of Urban Life and Death by Brenna Hassett. Copyright © Brenna Hassett, 2017. Published by Bloomsbury Sigma, an imprint of Bloomsbury Publishing. Reprinted with permission.