From the archives: 100 years of mastodon fossil fascination

It's almost easy to find mastodon bones in the United States 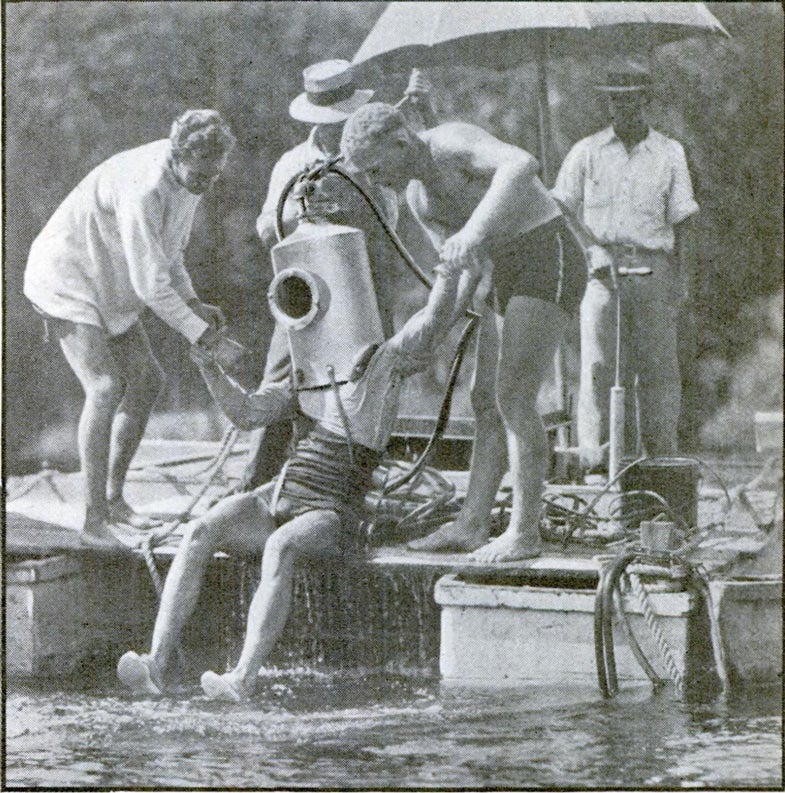 Florida pastimes in 1931: A group of curious explorers preparing to collect some mastodon bones from the bottom of 35-foot deep spring. Popular Science
SHARE

In a remarkable example of how not boring science is, a group of researchers really stirred the pot this week by suggesting that a clan of our big-brained human predecessors were hiking around North America a whopping 100,000 years earlier than previously thought. The suggestion is a shock to scientific convention, and this week Popular Science reported that these careful, evidence-based claims should still be washed down with a mammoth-sized goblet of skepticism.

According to the new research letter published in the journal Nature, these hominins smashed apart the mastodon bone’s with heavy rocks, seeking the mammal’s nutritious marrow. The study’s lead author, Steven Holen, told Popular Science that this evidence “went against everything I’ve ever taught in my career about early humans in North America.” Healthy debate now brews about the early presence of these humans in the North America—how they got here, who they were and where they went. But the other crucial character in this story—the massive, stomping mastodons of North America—are a common character in the continent’s past, and Popular Science has been reporting on these elephantine creatures for well over a century. Here are some of our favorites:

Man did co-exist with mastodons—there’s little doubt about that. Evidence suggests that humans made their grand arrival in North America around 13,000 years ago. In 1883, Popular Science reported that a human wisdom tooth found was just 12 feet from a mastodon tusk in New Jersey. But 134 years later, this research discussed above is the only indication that this relationship may have started 130,000 years ago.

An Italian gardener found not one, but two almost complete mastodon skeletons in his yard, about three feet beneath the ground. These prehistoric behemoths were super common in their day, so it’s not too far-fetched to think that some massive elephantine femurs could be buried in your yard, too.

Mastodon bones are found all over the United States. In this instance, teeth, tusks, and ribs were found around 30 miles south of San Francisco. A geologist suggested that the bones must be between two and three million years old, and—somewhat blithely—”hinted” that a human skull, found nearby, might be about the same age. That’s quite a momentous hint to casually drop….

Popular Science reported that a curious group of scientific adventurers in Florida donned diving suits to reach a goldmine of mastodon bones at the bottom of a 35-foot spring. The bone collectors pumped air into a hose, which was connected to a cartoonish can-shaped helmet, affording the submerged explorers a steady supply of oxygen as they pulled bones from the muck.

“Mercury and the Mastodon”: November 1971

“Have you ever developed a raging hunger for mastodon steaks?” Popular Science asked its early 1970s readers. Well, should you ever come across one of these colossal creatures and you choose to hunt it, (rather than report one of the most exciting and consequential scientific discoveries in history), you may want to temper how much mastodon you chomp on. An “atomic absorption spectrometer” (something we should all have) detected unacceptably high levels of mercury contamination in a 15,000-year-old mastodon bone. At one part per million, the contamination was twice that of permissible federal standards.

At this time, it’s still unknown if North American hominins 130,000 years ago (should they have existed) were concerned about mercury contamination in their organic ice-age meat and bone marrow.