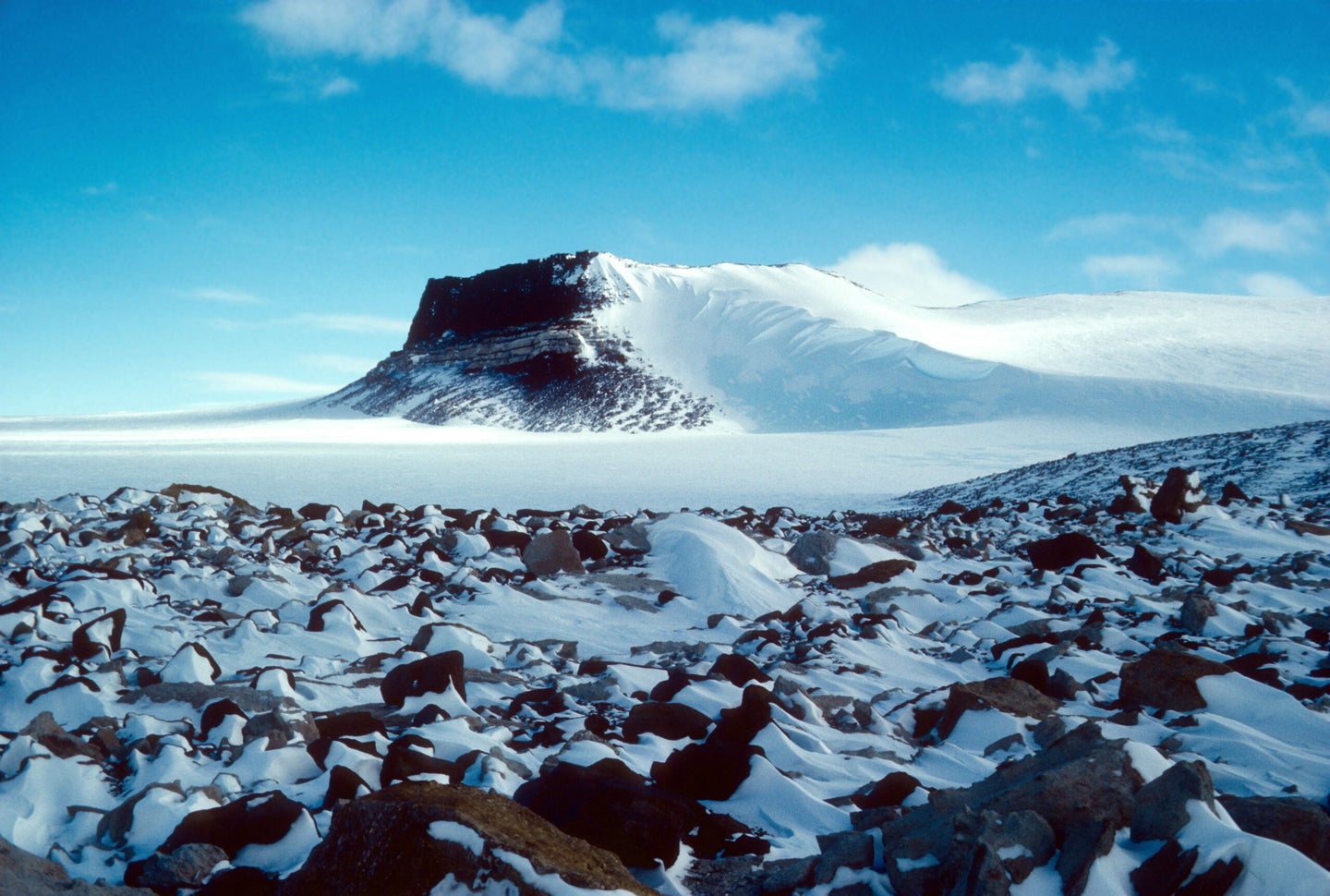 About 2.6 million-to-5.6 million years ago, during the Pliocene epoch, a geologic mystery transpired. Somehow, fossils from tiny algae with hard shells called diatoms ended up spread over rock formations in the Transantarctic Mountains. Flash forward millions of years later, and human geologists are still struggling to figure out just what happened on the Southernmost Continent.

One possible clue: during this time, there was a warm snap that pushed temperatures and sea levels much higher than they are today.

Some researchers thought that as a result, the ice sheets of Antarctica collapsed into a dramatic melting disaster, then slowly grew back. The steadily regrowing glaciers carried the microscopic fossils up the mountains into a group of rocks called the Sirius Group, which was also deposited by glaciers. Makes sense, right?

But others thought that was a ridiculous idea, that the ice sheets were more robust than that, and that the small diatoms had simply hitched a ride to the Sirius Group after being blown there by the wind.

A new paper published today in Nature Communications suggests that both theories might have a grain of truth to them. Using new data from Antarctica, and sophisticated computer models, researchers put together a picture of how those diatoms could have traveled.

“The computer models indicate that the East Antarctic Ice Sheet retreated during the Pliocene by some 300 miles into the interior of East Antarctica,” Northern Illinois University geologist Reed Scherer said. “So our findings indicate the Sirius diatoms were windblown, but they came from areas of reduced ice in East Antarctica, where extensive diatom-rich lands became exposed to the air.”

In other words, the ice did melt, but not quite as much as the first theory held, and the diatoms did get carried up the mountain by the wind, not glaciers.

An electron microscope image of a diatom.

The West Antarctic Ice Sheet, which is considered unstable today also would have melted during that time, Scherer said. The massive loss in ice is particularly interesting to scientists today because carbon dioxide levels are approaching the same levels that the Earth saw in the Pliocene.

“The rise in atmospheric carbon dioxide from burning fossil fuel has now elevated the concentration to 400 parts per million, matching for the first time the levels of the warm Pliocene,” Scherer said. “This makes the old debate about whether the ice sheet was notably smaller than it is now more relevant than ever.”

With the Antarctic ice sheets melted, at times during the Pliocene, Scherer says that sea levels could have been up to 75 feet higher than today. To put that in perspective consider that researchers are worried that a 3-6 foot increase in sea level could threaten millions of Americans.