A claim-by-claim analysis of a climate denial ‘news’ story

Anatomy of a fact check. 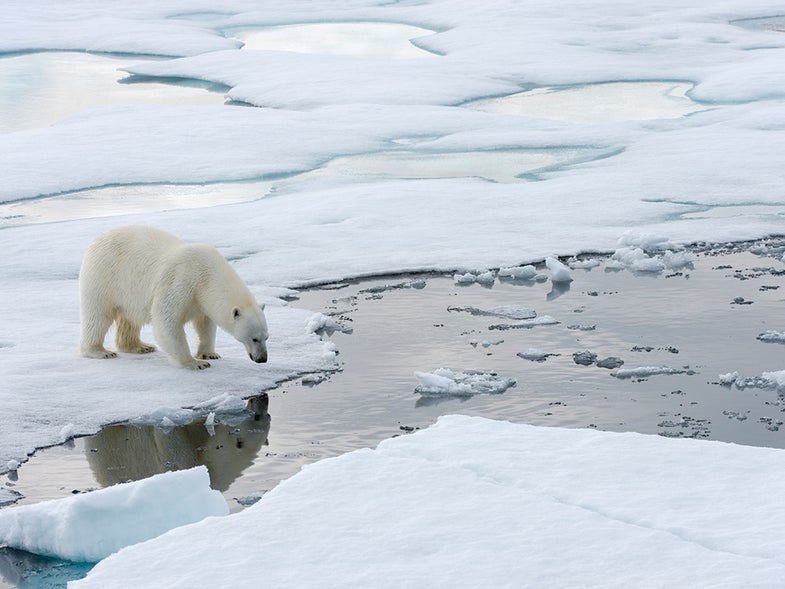 This story is a supplement for a longer feature on fake news, published in PopSci’s Intelligence Issue. You may want to read that first.

Below, an excerpt of a professional fact-checker’s claim-by-claim analysis of a climate denial “news” story.

Global warming alarmists claimed Arctic ice cap would be gone by now, but sea ice is 5% above 35 year average

NASA has updated its data from satellite readings 1 , revealing that the planet’s polar ice caps have not retreated significantly since 1979, when measurements began. 2

Indeed, the polar ice has, for almost three years now, remained above the 35 year average. 3

The data shows 4 that the ice caps remained at more or less the same level until 2005, when they slightly receded for a few years. 5

However, the 1979 measurements represented the tail end of a 30-year cooling period, meaning that a higher level of ice was taken as the baseline measurement. 6 Everything since has been compared to those figures. 7

The figures show that by 2012, sea ice was down almost 10 percent from the figures measured in 1979. 8 This was used by warming proponents to forecast disaster. 9

Those alarmists, however, ignored the fact that total polar ice had only receded by a modest amount, no where near ten percent. 10

Al Gore used the 10 percent figure and even warned that the Arctic ice cap could completely disappear by 2014. 11

In reality, by 2012 ice quickly came back and even surpassed the 1979 readings, reaching a new record maximum in the Antarctic in 2014. 12 Since that time it has remained above that previous baseline. 13

According to NASA’s latest data, it is now 5% above the mean average. 14

This is not to say that the ice will not retreat again at some point. 15 It is generally considered that the Earth’s temperatures are still rising slowly 16 since the so called ‘little ice age’ which ended in the mid 1800s. 17 The rise is thought to be due to a combination of natural and, to a much lesser extent, human influence. 18

Still, alarmist headlines continue to be used in respect to polar ice, 19 with some claiming that satellite data shows ice is melting at an unprecedented rate. 20

1 Sort of true. The hyperlink doesn’t go to updated NASA data, but to a now-defunct site from the University of Illinois’s Department of Atmospheric Sciences called The Cryosphere Today. The website used to show maps of Arctic ice, as well as how that ice varied over time. U of I prepared the maps based on data from the National Snow and Ice Data Center, which in turn used raw data from NASA. Source: John Walsh, chief scientist for the International Arctic Research Center at the University of Alaska, Fairbanks, and former climate scientist at the University of Illinois.

3 In 2015, when this was published, Arctic ice was receding, but Antarctica’s was increasing. If the author is considering the combined ice, as the headline suggests, it’s a half-truth: Ice coverage stayed above average in 2013 and 2014 but not in 2015, when it was below average. Sources: Parkinson, Global Sea Ice Coverage from Satellite Data: Annual Cycle and 35-Yr Trends,’ Journal of Climate, Volume 27, Issue 24 (2014); National Snow and Ice Data Center.

4 Here, the story linked to a Forbes blog post—a secondary source, rather than actual data. And the post’s author isn’t exactly unbiased: James Taylor, who is, among other roles, senior fellow at the Heartland Institute, a think tank that promotes climate change skepticism. (The Infowars article also appears to be borrowing liberally from the Forbes.com post.) Sources: “Updated NASA Data: Global Warming Not Causing Any Polar Ice Retreat,” Forbes.com, May 19, 2015; The Heartland Institute website (heartland.org).

5 False. In this time frame, the Arctic sea ice was decreasing, but Antarctica’s was increasing. Additionally, the statement about ice caps remaining at the same level until 2005 is untrue: Both Arctic and global sea-ice averages have shown a downward trend since 1979. Source: Parkinson.

6 There was a brief, 30-year cooling from around 1940 to the 1970s, but the larger trend from the 1880s to today has been warming. Infowars assumes cooling equaled more sea ice. We don’t know that. So we don’t know if the author took a higher level as a baseline. Sources: Parkinson; Walsh; The Goddard Institute for Space Studies Surface Temperature Analysis.

7 It’s true that the sea-ice data uses 1979 as a starting point. But that’s only because that’s when the data collection started—not long after the relevant satellite, Nimbus 7, launched. (There is some data from earlier in the ’70s, too, but these are from instruments carried on an earlier satellite, Nimbus 5, and aren’t usually used.) Sources: Parkinson; NASA.

9 The article doesn’t name specific “warming proponents,” making it difficult to confirm this one way or another.

10 It’s clear that “alarmists” refers to warming proponents, but, because the writer doesn’t name them, it’s impossible to fact-check who made the 10-percent claim or to find out if they, too, are conflating ice figures at both poles. Source: Parkinson.

12 If the claim refers to Arctic ice, it’s false. Ice there was receding at this time. The sentence then flips to a claim about Antarctic ice reaching a new maximum and staying above the baseline, which is true, but that’s not the Arctic. Sources: Parkinson; Walsh.

14 Again: If the claims reference Arctic or global ice, false; if it’s the Antarctic ice, they’re partly true. Sea ice there was up at the time, although by more than 5 percent. Sources: Parkinson; National Snow and Ice Data Center.

15 Correct. This is a natural fluctuation in the ice, which will continue to expand and retreat. But these changes don’t reverse the larger trend of the ice disappearing. Sources: Parkinson; Walsh.

16 Mostly correct. It’s true that temperatures are going up, but whether it’s happening “slowly” is a matter of perspective. Sources: Parkinson; Walsh; NASA.

18 It’s true that both natural and human-made processes drive climate change, but the scientific consensus is that human influence is greater since the mid-20th century. Source: Intergovernmental Panel on Climate Change.

19 This sentence links to a Washington Post story about land ice, not sea ice, which isn’t relevant. And it also published several months before the University of Illinois published the visualization that Infowars uses as the foundation for its argument. So, even if the topic was relevant, the time frame doesn’t support the idea that headlines continue to be alarmist despite the new data. Sources: Parkinson; Joby Warrick, “An Arctic cap’s shockingly rapid slide into the sea,” The Washington Post, January 23, 2015.