Scientists are solving the mystery of Earth’s thermostat

Our planet can control its climate—very slowly. 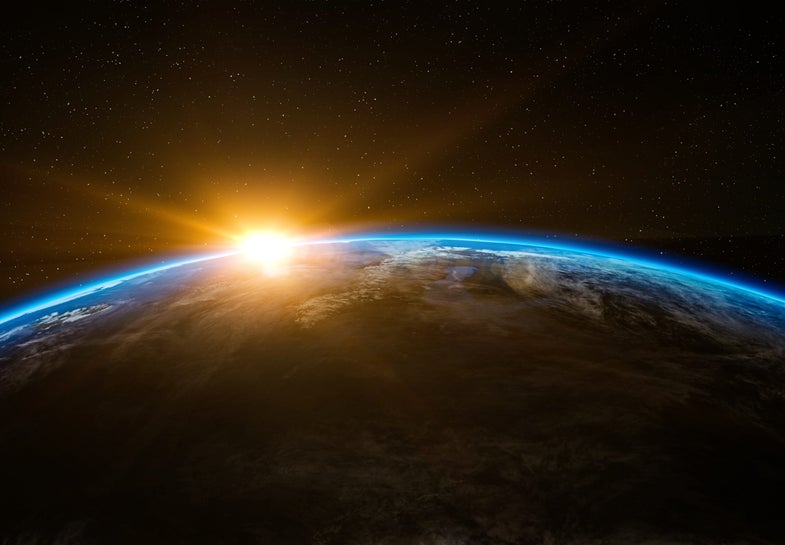 Life on Earth has survived vast changes in climate, from a warm period 450 million years ago, when most of the present-day United States was underwater, to the last ice age 20,000 years ago, when New England was buried beneath a mile-thick glacier. Though climate change triggered mass extinctions, life went on.

This is something of mystery. Runaway climate change turned Venus into a scorching hellscape, but Earth never grew so hot or cold that life failed to endure. Even in its most turbulent moments, our tiny planet remained a refuge, a blue-green lifeboat adrift against the vast hostility of space. Why?

Scientists have long speculated on the possibility of a planetary thermostat keeping climate change in check. A new study published in the journal Geochemical Perspectives Letters provides the first-ever evidence of its existence.

“The climate must be relatively constrained. It can’t change too much, otherwise life would go extinct,” according to Philip Pogge von Strandmann, a geochemist at University College London and lead author of the study. “There must be some mechanism that prevents the climate from going completely crazy.”

That mechanism is something called the “weathering thermostat.” Here’s how it works: Carbon dioxide traps heat, keeping the Earth nice and cozy. A dip in CO2 can bring about an ice age. A spike can make the planet sizzle. Earth regulates this greenhouse gas through weathering. Atmospheric carbon dioxide dissolves in rainwater and combines with rocks to form bicarbonate.

“If you a dissolve a rock in water — rain water, river water — that process takes CO2 out of the atmosphere and puts it in the water as bicarbonate. That goes from the rivers into the ocean,” said Pogge von Strandmann. Once in the ocean, the bicarbonate combines with calcium to form limestone. “That locks up the carbon dioxide,” he said.

The global thermostat responds to hot and cold. Heat speeds up chemical reactions, causing rocks and rainwater to draw down carbon dioxide levels more rapidly, thereby cooling the planet faster. Cold temperatures slow down this process, preventing the planet from getting too chilly.

“It had been assumed for ages. It was in all the climate models, but it had never actually been proven,” said Pogge von Strandmann. “We actually now have some evidence from past climate events that weathering responds to temperature.”

Pogge von Strandmann and his colleagues looked for clues in limestone deposits, which contain lithium isotopes introduced by weathering. The concentration of lithium varies across layers of limestone. More lithium corresponds with warmer periods, when weathering sped up.

Of course, weathering isn’t the only influence on the global climate. The climate also responds to changes in solar activity and the growth of vegetation, for example. Plants scrub carbon dioxide from the atmosphere, cooling the planet, but their effect is limited. Typically, when plants die and decay, they release their stores of carbon back into the skies. Pogge von Strandmann says that, over eons, vegetation shapes the climate far less than weathering.

“It’s some degree of liquid water interacting with rock that keeps the Earth’s climate stable over long time periods,” said Pogge von Strandmann. As he noted, this is of little comfort when it comes to human-caused climate change. Weathering changes the climate gradually, over many thousands of years.

“We know that weathering will increase [as the planet gets warmer],” he said. “We know that it will remove carbon dioxide, but it will be at least 100,000 years or so before it would allow the climate to recover back to pre-industrial conditions.” By burning coal, oil and natural gas, humans are transforming the climate on the scale of decades.

“There are movements to see if we can harness this process artificially to remove carbon dioxide faster,” said Pogge von Strandmann. “You get a lot of very fine-grained silicate rock and plow it into fields all around the Earth. The finer grain the rock, the quicker it dissolves, and the faster it removes CO2.” Unfortunately, this method it still in the experimental phase, and there’s no guarantee that it could be scaled up to fight climate change.

“You would have to transport the silicate rock around from the place it’s being mined to the place you want to plow it into the fields, and you have to expend energy grinding it down to a small grain size,” said Pogge von Strandmann. “There are lots of experiments going on at the moment to find out what grain size we would need and what the consequences are in terms of effectively plowing lots of rock powder into fields.”

By looking to the geological record, scientists can gauge the consequences of rapid weathering. History shows that a surge of bicarbonate in the ocean can trigger a plankton bloom. Plankton gobble up oxygen in the water, leaving other sea creatures to suffocate. Even this, however, may be preferable to climate change.

While the Earth’s climate is always in flux, and life will continue to persist through the rise and fall of temperature, the rapid warming brought about by burning fossil fuels will make life much harder for humans. It is necessary to limit carbon pollution to ensure the Earth remains hospitable for our species.

“The Earth’s climate varies a lot. It has varied a lot in the past,” said Pogge von Strandmann. “The point is, of course, that every time it varies a lot, it causes a big, mass extinction.”