Tardigrades go where the slime takes them

Is snail slime the secret to the water bear's dominance? 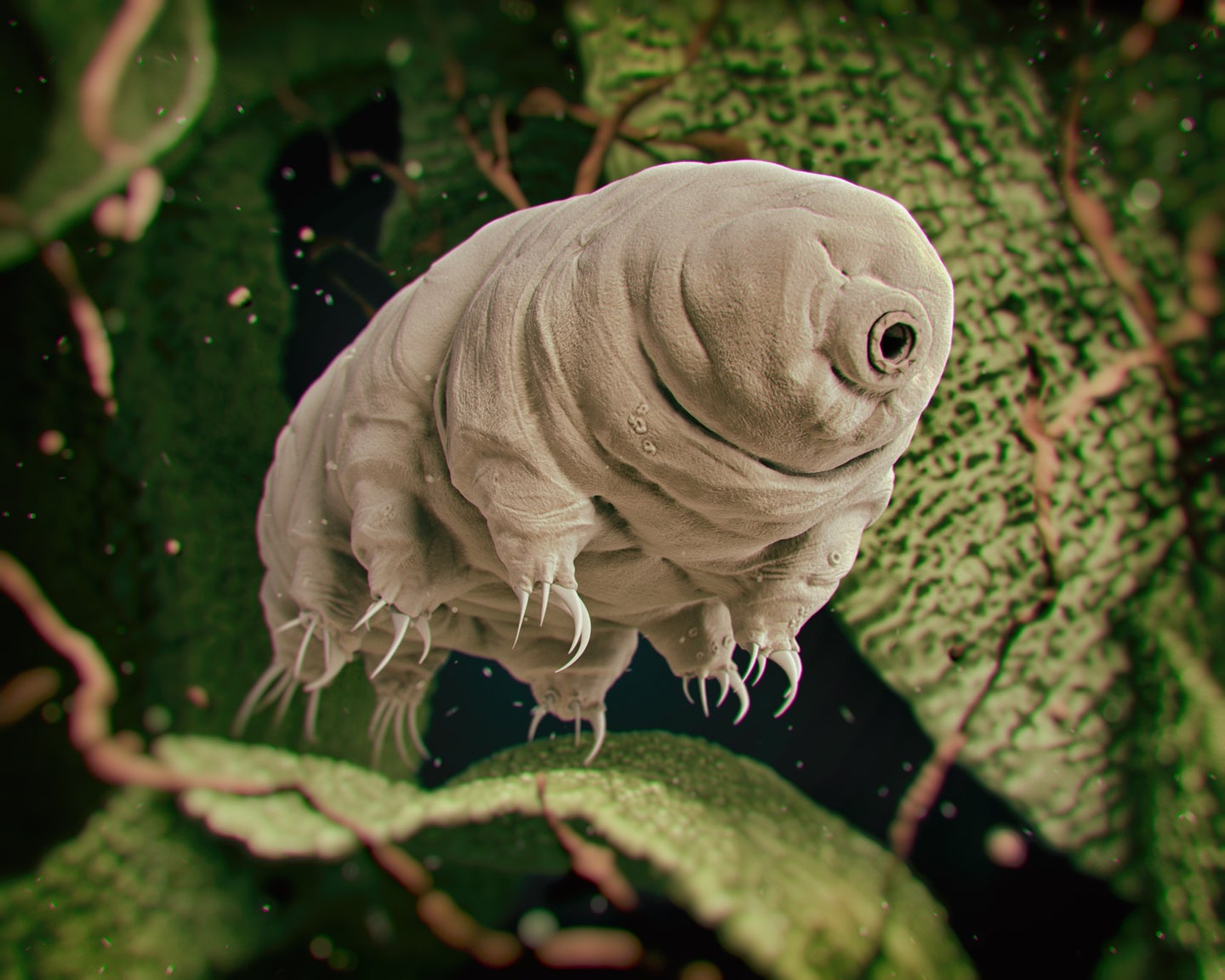 Tardigrades can lumber along surprisingly well for their size, but to move from habitat to habitat, they probably have to hitch a ride. Deposit Photos
SHARE

The tiny, mighty tardigrade can tough out the most extreme environments, surviving in oceans, Antarctic glaciers, lava fields, sand dunes, and, more famously, space. Fondly known as “water bears,” “moss piglets,” and “hardy tardies,” these millimeter-long invertebrates have been found in nearly every habitat on Earth, even nestling in mossy beds or the damp soil in people’s yards. Given their widespread reign over the planet, researchers have long tried to understand how the animal has dispersed to such far-flung locations.

Last week, biologists at Adam Mickiewicz University in Poland described one potential, albeit risky, way tardigrades can shuttle around: snail slime. In the lab, the team looked at the relationship between tardigrade species Milnesium inceptum and a land snail species Cepaea nemoralis, and found that the water bears that stuck to the mucus on the snail’s body were able to be transported short distances. However, the secretion comes with a dangerous price: While the tardigrades could move farther with the snails’ help, few of them lived to the end of the sticky journey.

Though the ride might be purely coincidental and even costly, “such a short-distance transportation may have significant impact on genetic diversity of local populations of animals,” study authors Zofia Książkiewicz and Milena Roszkowska wrote together in an email. Their findings were published on April 14 in the journal Scientific Reports.

For its size, water bears do have an impressive range of movement—they can individually coordinate their eight stocky legs and wiggle around their heads. At their most active in favorable wet habitats, tardigrades can be seen walking up to two body lengths per second in a similar scampering fashion to insects. Still, they can only get so far at that pace.

“Tardigrades are truly fascinating creatures,” Molly Jane Kirk, a molecular biologist at UC Santa Barbara who studies how tardigrades have adapted to extreme environments, wrote in an email. “They have managed this dispersal despite their truly minuscule stature, which strongly suggests that, like other closely related arthropods, they used some help to get to their novel habitats.”

Past research has suggested that the invertebrates might catch a long-distance flight on a gust of wind or sail on water currents. Other studies have shown signs that tardigrades might be able to travel on birds’ feathers or inside snails’ gastrointestinal tracts. Roszkowska, who studies tardigrades, and Książkiewicz, who studies snails, thought to explore the intersection of the two organisms because both can be found in some of the same habitats. Since the shelled creatures are covered in a moist layer, Roszkowska and Książkiewicz suspected that there could be an advantage for water bears to hitch a ride.

In a controlled lab environment, the team looked at Cepaea nemoralis’s ability to transport both active tardigrades and those tucked into their “tun state”—which is a kind of hibernation where they survive in a frozen form. When they enter this mode, the tardigrades shed most of their water and nearly have their metabolic rates flatline. They can linger in this desiccated state for 30 years, and even reproduce once revived (or rehydrated) with water.

[Related: Cave worms could hold the secrets to a better life]

Książkiewicz and Roszkowska placed Milnesium inceptum-filled water drops and moss inside a container and watched if the invertebrates could clamber over the walls solo. Then, they had a land snail move across the substrates to see if the microscopic inhabitants would stick to the mucus to get past the barrier. The water bears that didn’t share a space with the snails stayed right in the box, even when they were in an active state. But those that did buddy up were successfully transported from the barricade. This suggests that tardigrades might regularly piggyback on snails.

However, after the lift, the ride sharers were caked in dried-up slime. In a second experiment, Książkiewicz and Roszkowska tried rehydrating the travel-worn tardigrades, and found that only 34 percent of them could be revived after being slimed. Meanwhile, 98 percent of the tardigrades that didn’t take the snail-mobile survived.

“We knew that the main component of the snail’s mucus was water. However, after the mucus dried up, the tardigrades were ‘frozen’ in very weird poses with not fully formed tuns,” Książkiewicz and Roszkowska wrote in the email. “We did not think they would be able to return to life after rehydration. Some of them did not [survive], but others successfully underwent the rehydration process and returned to the active life [phase].”

Kirk, who was not involved in the study, was surprised by the high death rate, especially given tardigrades’ well-studied ability to survive in harsh conditions. “It is unclear how tardigrade death was assessed and compared to motionlessness,” she wrote. “Often tardigrades have a specific body posture when dead.” But the paper, she pointed out, didn’t describe that in great detail.

Both Kirk and the study authors would like to learn more about the composition of the snails’ slime and the compounds that could potentially make it harmful to the otherwise resilient water bears. Książkiewicz and Roszkowska suggested that this transport system might be more efficient for tardigrade eggs, potentially due to spike- or disc-like attachment structures.

They also noted that the study was conducted in a lab setting, and are not aware of the behavior being documented in the wild. This makes it difficult to conclude whether tardigrades intentionally hook to a snail’s body to move around, or if they simply get caught up in the goo. It’s more likely that this hazardous trip would happen by chance if a snail and tardigrade ever cross paths, the authors stated.

“It would be important to see this sort of transfer outside of the laboratory in their native habitats to confirm this finding occurs there, too,” Kirk wrote. She added that the findings are still a creative approach to understanding how water bear dispersal could yield insights on their evolution and ability to survive—or not survive—in extreme places.

“It would help me to understand, for example, that extremotolerance is not enough, and the animal might choose to search for a more hospitable habitat,” Kirk explained. The invertebrates’ survival skills are being studied to one day help humans become more resilient to disease and radiation.

What’s more, this new insight on tardigrade transportation is valuable because “we still know very little about this group of animals,” Książkiewicz and Roszkowska wrote. “Our study exposed a very interesting relationship that made us realize how many interactions in the natural world we do not know, and are happening right next to us.”

Correction (April 26, 2022): An earlier version of this story featured an incorrect image of another tiny organism, a springtail. While also a very cool critter, it has since been replaced by a more accurate rendering of a tardigrade. We regret the editing error.