Longterm polyamory seems to work just fine for these frogs

The male rainforest frog Thoropa taophora is the first amphibian known to be faithful to several ladies. 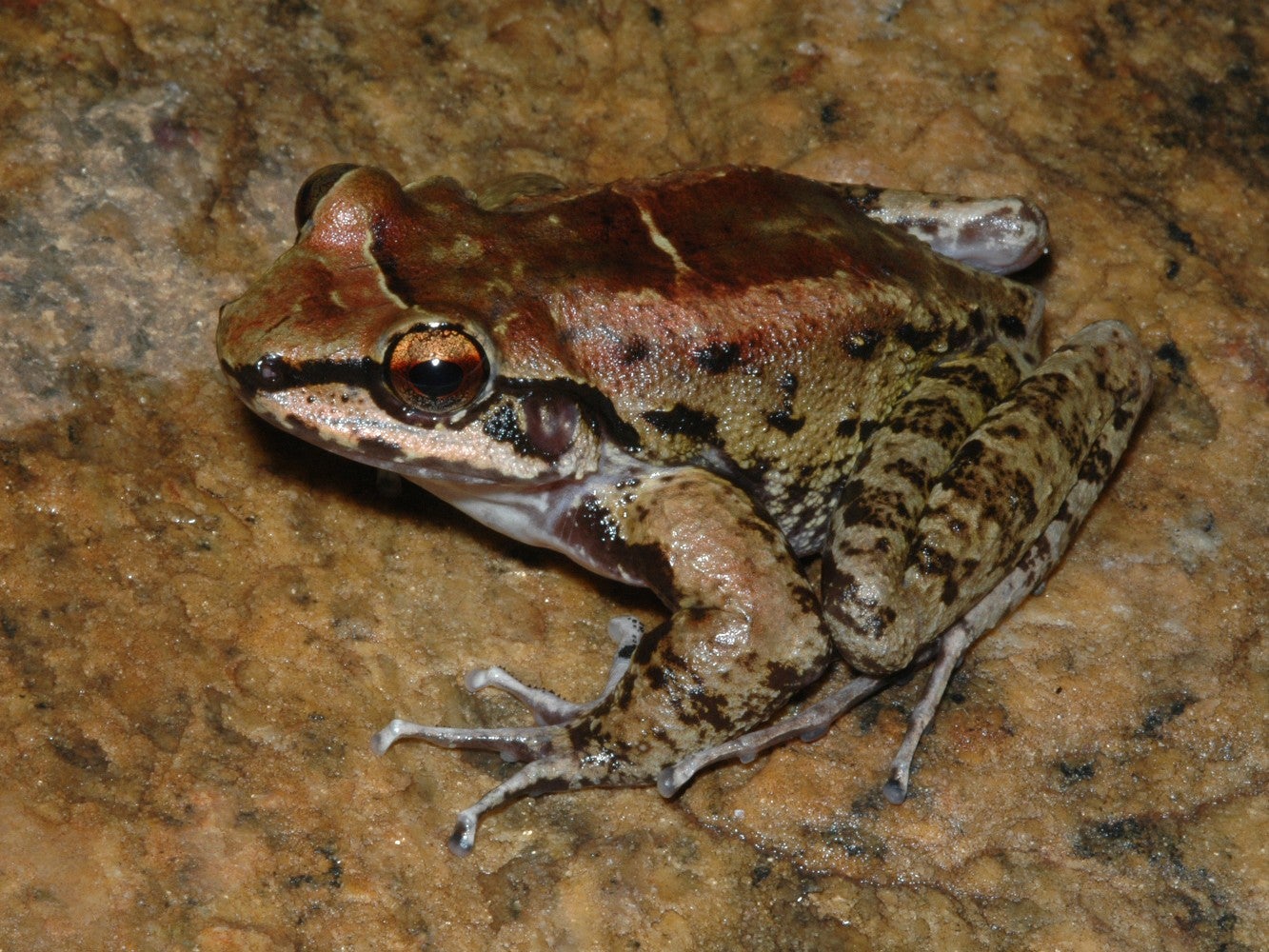 Goat frogs, which are native to Brazil’s Atlantic rainforest, are the first known case of an amphibian species in which males maintain lasting relationships with more than one female mate. Credit: Fábio de Sá
SHARE

For male members of the tropical frog species Thoropa taophora, also known as goat frogs, the breeding season is filled with responsibilities. During this ten-month long period, males must do typical frog duties like stake out and defend their territories but they must also navigate an unusually complicated romantic arrangement.

This busy lifestyle makes Thoropa taophora a striking exception among amphibians, scientists reported on August 12 in the journal Science Advances. These frogs, which are native to Brazil’s Atlantic rainforest, are the first known case of an amphibian species in which males maintain lasting relationships with more than one female mate.

When visiting their mates, the researchers noted, the females have a habit of eating eggs that have already been laid. The males respond differently depending on which female is involved, with some receiving amorous attention and others more platonic embraces. This indicates that one female enjoys a higher social rank than her peers.

“There’s a lot here going on that’s at a level of individual interaction that was somewhat surprising, because people don’t think of frogs as being like this,” says Kelly Zamudio, a biologist at Cornell University and one of the authors of the findings. Fidelity is not unheard of in the amphibian world; mimic poison frogs form monogamous partnerships and share parental duties. Still, Zamudio says, “Most frogs set up a place at the edge of a pond and call over the course of a night and females come and go and they mate, they lay their eggs, and that’s it.”

To better understand the sex lives of these unusual frogs, she and her colleagues recorded the amphibians at 10 breeding sites. Thoropa taophora tadpoles hatch and spend their early lives in freshwater seeps trickling over the surfaces of rocky outcrops, using their muscular tails to glide over the humid stones, says Fábio de Sá, a biologist at the University of Campinas in Brazil and another coauthor of the findings. These habitats are scarce and spaced out between inhospitable dry rocks. When males find a promising seep, they can monopolize it. By night, the researchers saw, they patrol their territories and fight off intruders, including other males intending to gobble up the eggs or tadpoles.

The team also observed the frogs during their courtship, which involved groups of one male and two or occasionally three females, one of which seemed to be at the top of the pecking order. These dominant females were the only ones the researchers spied mating with the males.

Females of all ranks sometimes began to snack on eggs; it’s unclear whether they were purposely eating eggs that belonged to other females or if they were just choosing at random. The males often put a stop to this cannibalism by chasing off the offender. In a few instances, though, males took a different approach, mating with other dominant females or giving lower-ranking ones a brisk embrace to dissuade them from eating more eggs.

The researchers also visited seven seeps and used genetic testing to identify the resident tadpoles’ parents. They found that one top-ranking female frog had mothered between 56 and 97 percent of the tadpoles in a given seep, with the remaining offspring belonging to a second female.

The tadpole half-siblings varied in age, with some newly hatched and others on the cusp of metamorphosing into adults. This indicates that both females mate with the lone male and lay eggs multiple times over the breeding season.

Cases where a lone male mates exclusively with a small number of females have been observed in beetles, fish, lizards, birds, and mammals such as gorillas and lions, de Sá says. The reason that Thoropa taophora adopted this strategy is probably related to the unusual environment favored by their tadpoles. For lower-ranking females, being part of the gang presents an opportunity to make the best of a difficult situation.

“You either stay because this guy has a really good seep and you may, even as a secondary or tertiary [female], get a few eggs, or you leave and try to find another male,” Zamudio says. “Chances are that you’re going to be on a worse seep, because these seeps are not everywhere…it’s the tradeoff between the potential for some eggs or having none.”

It’s likely that there are other amphibian species in which males are devoted to a small troupe of females, she says. These ensembles might form where prime habitat is limited and can be separated into distinct parcels that one male can take over and defend.

“I bet it’s been underappreciated and it’s out there in some of the species that have more specialized reproductive needs,” Zamudio says. “We just haven’t found it yet.”