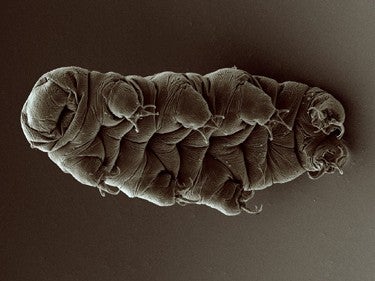 With their pillowy bodies and proclivity for damp or wet environments, tardigrades have earned the nickname “water bears.” The microscopic eight-legged animals are resilient and adaptable, able to navigate and survive in almost any habitat. And while scientists have known about these unique little creatures since the 18th century, new research finally provides a closer look at how these water bears get around.

Biophysicists and morphologists analyzed tardigrade walking patterns and found that their gait closely matches those of insects 500,000 times their size, implying that the water bears may share a common ancestor with fruit flies, ants, or perhaps other segmented bugs. Tardigrades also maintain their same scurrying gait no matter their travel speeds, a characteristic mostly observed in insects. The findings were recently published in Proceedings of the National Academy of Sciences.

“One of the coolest—and initially most surprising—things about tardigrades walking to me was how…good they were at it,” co-author Jasmine Nirody, a biophysicist at The Rockefeller University, wrote in a tweet.

Nirody and her team walked their water bears over a variety of surfaces, observing how their anatomy moved and changed in different conditions. They found that, at their slowest, tardigrades plod along at about half a body length per second. When they’re really revved up, however, they can hustle up to two body lengths per second.

“Tardigrades have a robust and clear way of moving—they’re not these clumsy things stumbling around,” Nirody said in a statement. “If you watch tardigrades under a light microscope for long enough, you can capture a wide range of behavior,” she added. “We didn’t force them to do anything. Sometimes they would be really chill and just want to stroll around the substrate. Other times, they’d see something they like and run towards it.”

[Related: What you need to know about the tardigrade cannon]

Tardigrade strides were also remarkably insect-like. Vertebrate animals tend to have different motions reserved for different speeds—for example, a walking horse looks very different from a horse at full gallop. But tardigrades, which are invertebrates, scuttle like bugs, smoothly maintaining their step patterns no matter their changing speeds.

Whether tardigrades and insects have a common evolutionary ancestor, or whether they just evolved their walking patterns in parallel, is still up for debate—and it’s a compelling one, given how adaptable tardigrades are to extreme habitats. They can survive in areas with immense pressure, after prolonged periods of desiccation, in temperatures from just above absolute zero to well above boiling, and even in the vacuum of space. Learning why tardigrades evolved to walk the way they do could give biologists a better understanding of the amazing survival abilities of these micro-animals.