They're cute, and potentially useful for delivering medicines to the right part of your body 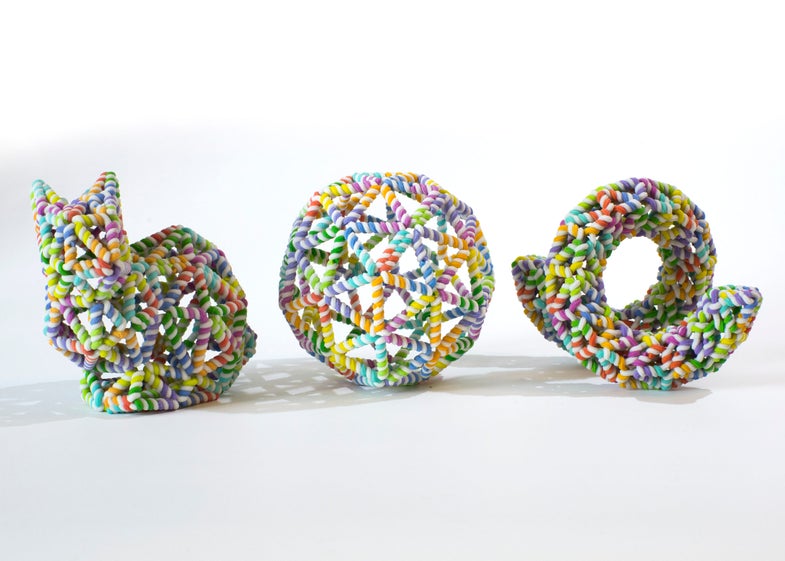 3D printing on the nanoscale–which could lead to new methods of drug delivery–just became a lot closer to reality. Folding DNA into tiny 3D shapes usually requires manual adjustment, but now a research team has developed a new way of folding DNA that’s done entirely by software. They’ve already tried it out by folding DNA into the shape of a miniature bunny figurine and other small shapes. The new, more efficient method was published today in Nature.

The structures that the team created are physiologically stable, meaning that they don’t degrade inside the body. The researchers are hoping they can be immediately tried as a new way to deliver drugs to the right place in the body.

The new printing method is based on a famous mathematical question from the early eighteenth century, known as “the seven bridges of Königsberg.” Königsberg (today’s Kaliningrad in Russia) is sprawled in and around an island with seven bridges connecting the island with the rest of the city. The question asks if it’s possible to come up with a looped walking route that visits all four parts of the city by crossing each bridge once, but only once. Leonhard Euler, a Swiss mathematician, found it wasn’t possible, and discovered what would come to be known as Eulerian circuits. This type of circuit, or loop, could only exist if the number of edges touching an object or area was even.

To create a 3D object out of DNA without tangling it, researchers at the Karolinska Institutet in Stockholm, Sweden, used a similar approach: to route a single strand of DNA along the edges of a 3D computer graphic of an object–they used objects of varying complexity, including a scan of a ceramic rabbit figurine, a ball, and a human-like figure–without crossing the same edge twice. The computer algorithm found a route whenever possible, and when that wasn’t possible (i.e. when there were an odd number of vertices) it introduced “helper” edges.

This isn’t the first time scientists have constructed 3D objects using DNA — its known as DNA origami–but this new method may present a more versatile and efficient design by allowing the process to be fully automated by a computer. Now, they need to find a way to create these figurines at a cheaper, more rapid pace, which would pave the way for their use in drug delivery.