The Science Of Decriminalizing Drugs

What happens when states ease up on penalties for possession 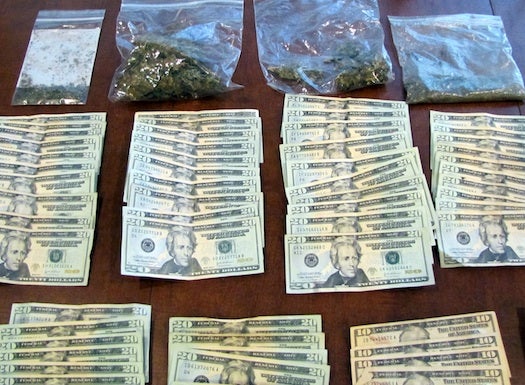 The legal landscape for marijuana has never looked this relaxed. Alaska, Oregon, and Washington, D.C. voted during the recent election season to legalize the recreational use of marijuana. Other states reduced the punishments for possessing small amounts of the drug, a move the American Academy of Pediatrics just endorsed. According to polls, more Americans than ever support legalizing Cannabis.

As legal and public views shift, we thought we’d take a look at the science of decriminalizing drugs.

What can science actually answer about the effects of looser drug laws?

Researchers know the most about the outcomes of decriminalizing marijuana. That’s because decriminalization laws are much more common than legalization laws–we’ll get to that next–and because many more states and nations have decriminalized marijuana than other recreational drugs. So researchers have more pot-related case studies to examine.

Is there a difference between decriminalization and legalization?

Yes. Decriminalization generally means laws that reduce or eliminate the punishments associated with possessing small amounts of marijuana or other recreational drugs.

In a decriminalized state, selling lots of drugs is still a serious crime. Legalization, on the other hand, means allowing people not only to consume, but also to sell bulk amounts of a drug. A legalized state may even try to set up a system for regulating and taxing drug sales.

Of course, every state has its own particular laws. Those laws may fall anywhere in a spectrum between lax and strict. Still, researchers like to distinguish between decriminalization-type laws and legalization-type laws because they may have quite different effects. Economist Rosalie Pacula told Popular Science that the outcomes researchers have seen from decriminalized states likely won’t help predict what will happen in legalized states, such as Colorado and Washington. Colorado’s and Washington’s marijuana-legalization laws are unprecedented in modern times.

Now that it’s been about a year since Colorado and Washington’s laws went into effect, however, we’re going to start seeing thorough research about their consequences very soon. Some early findings are already slipping out.

What happens to states that decriminalize marijuana?

The best-known consequence to decriminalizing marijuana: The criminal-justice system saves money and resources. We’ve seen strong scientific backing on this because it’s a relatively easy outcome to measure.

Drug-related arrests and prison sentences decrease, which may fall in line with the majority American attitude that the government spends too much enforcing marijuana laws, anyway.

Exactly how much money will a state will save in prosecution costs? That’s under intense debate. Different studies of California have found savings ranging from hundreds of millions of dollars to more than a billion dollars–an unhelpfully big range.

Do people use marijuana more after their home state decriminalizes it?

No, or not much. Studies of use after decriminalization generally find either no effect or a small increase in use. Most recently, the American Academy of Pediatrics found that the rate of kids under age 18 who reported smoking marijuana doesn’t change after their home states pass laws allowing for medical marijuana. (If anything, those numbers decreased in many states–but chance alone best explains the perceived decrease.)

One possible reason decriminalization doesn’t have much of an effect is that people don’t actually seem to know whether they live in a decriminalized state, says Pacula, who co-directs the drug policy research center at the RAND Corporation, a non-partisan research group. When asked in surveys, Americans seem to know some of their local fines, but they don’t know about their state laws overall.

The majority American attitude is that the government spends too much enforcing marijuana laws.

Nevertheless, there are small hints that some may suffer after decriminalization. In 1992, a RAND Corporation economist named Karyn Model published a study that found that in states which decriminalized the possession of marijuana in the 1970s, marijuana-related emergency room check-ins increased, while emergency visits for other drugs decreased. It appeared that more people were replacing other drugs with pot once it was decriminalized, Model wrote. Reuter calls the study “very good,” but notes it hadn’t been replicated.

One analysis of decriminalized states in Australia found that the overall number of marijuana users stayed the same after decriminalization, but people began using pot at a younger age. That may have health consequences in the future, but that hasn’t been studied, Pacula says.

It may never be, not in the way Americans may expect after the blitz of studies that linked lung cancer and tobacco. Not nearly as many people smoke marijuana as they do cigarettes, so the statistical significance of such studies will never prove to the same confidence.

What happens if you decriminalize everything?

At the far end of natural experiments, Portugal has, for the last 12 years, decriminalized possession of not only marijuana, but every recreational drug. As a result, the country has drawn a spotlight of attention and research.

Interestingly, researchers and politicians both for and against general drug decriminalization have used Portugal as an example. The disagreements arise in part because different people looked at different numbers, such as lifetime drug use, which went up, or problematic drug use, which went down. Alex Stevens, a criminal justice researcher at the University of Kent in the U.K. who has studied Portugal extensively and supports the country’s policy, thinks that the most important numbers show improvement. Lifetime drug use could include many people who tried a drug, but didn’t develop a harmful habit, he says.

In-depth reporting by the Boston Globe and at the New Yorker agreed with this sentiment, concluding that–after drug reform–Portugal’s drug use situation mostly got better. Confounding more clarity, however, was a comprehensive program for treating addicts that started at the same time, so it’s difficult to isolate the effects of decriminalization versus treatment.