Faraway Quasar Group Is The Largest Structure In The Universe

It would take a light-speed craft 4 billion years to get from one side of the group to the other. 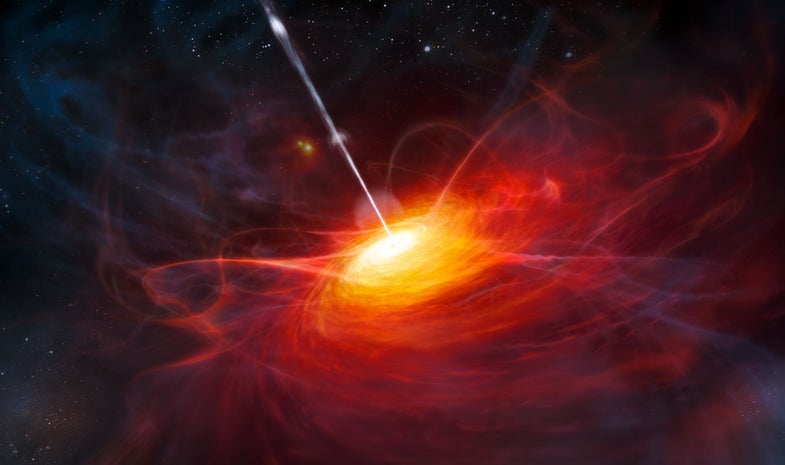 This artist’s impression shows how ULAS J1120+0641, a very distant quasar powered by a black hole with a mass two billion times that of the Sun, may have looked. This quasar is the most distant yet found and is seen as it was just 770 million years after the Big Bang. This object is by far the brightest object yet discovered in the early Universe.
SHARE

Behold, the largest structure in the universe. An international team of astronomers has discovered a large quasar group (also known as an LQG) that is some 4 billion light years across. For comparison, that’s something like 1600 times farther than the distance between the Milky Way and the “nearby” Andromeda Galaxy.That’s huge.

It’s also really far away. Quasars are the cores of galaxies during the early days of the universe. Periodically, these cosmological artifacts emit huge amounts of extremely bright light, which makes them visible across vast distances of space. This LQG is so far away that it looks as it did when the universe was just 770 million years old. It is hands down the brightest object we’ve ever observed out there, so bright and huge that it actually challenges one of the underpinnings of modern cosmology: the Cosmological Principle.

The Cosmological Principle is the assumption that the universe, if viewed from a large enough scale, looks the same no matter where you are viewing it from. It’s one of those things that fits in with the work theorists like Einstein and others who have vastly influenced 20th- and 21-st century cosmological thinking, but that we obviously can’t observe. Cosmologists (generally speaking) just believe it, or at least recognize it. But the Cosmological Principle, when factored into the prevailing theories of cosmology, suggests that astrophysicists shouldn’t be able to find anything bigger than 370 megaparsecs (again, for scale, the distance from here to Andromeda is roughly 0.75 megaparsecs, or 2.5 million light-years).

This new LQC appears to average more like 500 megaparsecs across, with its longest dimension reaching up to 1,200 megaparsecs. That doesn’t necessarily mean the Cosmological Principle is toast, but we may have to take what we think we understand about it back to the drawing board.